Rather than focus on its lead character’s humanity, the dopey script spins a conspiracy that would be laughed off the internet 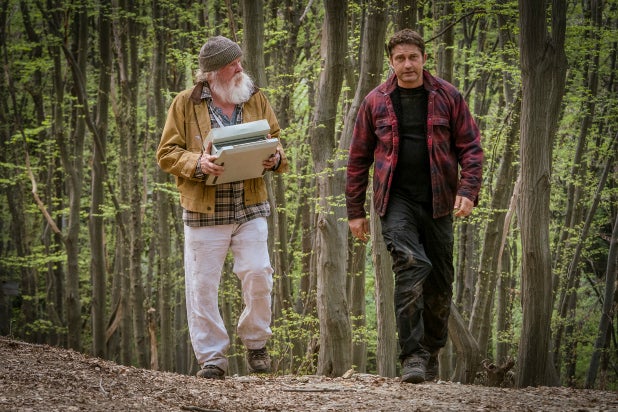 No one has ever accused a Gerard Butler action movie of being too smart, but “Angel Has Fallen” operates on such a level of half-considered logic and improbable motivations that even moderately well-mounted action can’t distract audiences from how dumb it is.

Returning for the third time to the role of Mike Banning, Butler at least addresses the threat of aging out of a surprisingly anemic landscape of C-grade movies that actually open nationwide in theaters, but director and co-writer Ric Roman Waugh (“Snitch”) seems more interested in defying his main character’s reality than substantially exploring it in this political thriller that blends the most overworked and stale ideas from “First Blood,” “The Fugitive” and even “The Bodyguard” into a watery, tasteless, unfulfilling stew.

Three years after the events of “London Has Fallen,” Mike Banning is poised for a promotion to head of the Secret Service under President Allan Trumbull (Morgan Freeman), an honorable leader frustrated by the leaks that inexplicably pour out of his inner circle. Banning isn’t sure if he wants the job; despite a growing addiction to painkillers to get through daily life — much less his military exercises — he doesn’t know if behind a desk is the best place for his skill set.

But when an assassination attempt is made on the President’s life and Banning is the only survivor from Trumbull’s security detail, FBI agents Helen Thompson (Jada Pinkett Smith) and Ramirez (Joseph Millson) find a wealth of evidence pointing to Mike as the perpetrator.

Awakening to discover Trumbull in a coma and himself declared Public Enemy No. 1, Banning reluctantly acquiesces to due process, only to be unexpectedly “rescued” by a shadowy group of mercenaries keen to cement him with the blame for the assassination attempt. But after realizing that Trumbull’s death paves the way for a regime change in the White House — and a policy change that could make that mysterious organization very wealthy — Banning is forced to escape his captors and evade the authorities, even as he scrambles to protect his President and uncover the real perpetrators before they can finish the job.

In terms of its politics, “Angel Has Fallen” is a movie that wants its cake and to eat it too, to use election interference and Russian influence as a timely plot motivator but feature a contemporary President who’s indefatigably refined and thoughtful. But it’s a split that proves fatal to the believability of its premise — starting with a commander-in-chief allied with a VP whose policies seem starkly opposite to his own, and then a decommissioned private American military force so determined or desperate to replenish service contracts that its leaders would flagrantly murder Americans, soldiers and citizens alike, by the dozens.

The fact that two of Hollywood’s most go-to actors for portraying suspicious characters, Tim Blake Nelson and Danny Huston, play the Vice President and one of Banning’s former colleagues, Wade Jennings, only concentrates the audience’s attention on “twists” that would, or maybe should be surprising, if they weren’t revealed during some of the film’s earliest scenes.

At the very least, “Angel Has Fallen” acknowledges that Banning has seen enough action that he might want to turn his back on it for good; after an opening scene that showcases Mike’s mettle as a one-man security force, he crunches painkillers and returns home to restlessly watch over his wife Leah (Piper Perabo) and their three-year-old daughter. But like a superhero who’s most focused when circumstances are most dire, Banning’s escalating PTSD virtually disappears after the assassination attempt, fighting his way out of a moving car full of black-clad killers like he’s in the opening scenes of “Deadpool,” and moving on to face off against a literal army of bloodthirsty mercenaries — again, whose goal is to land cushy government contracts after murdering the President on American soil.

The script by Waugh, Robert Mark Kamen and Matt Cook attempts to speculate about Banning’s fate by introducing his gruffly mad, off-the-grid father Clay (Nick Nolte, reliably feral), but their dynamic is mostly played to tie up loose plot threads and generate laughs while the more serious business of addressing wartime trauma fades into the background.

After more than a decade’s worth of movies like this, much less the three increasingly silly installments of the “Has Fallen” franchise, Butler remains dogged in his persistence in keeping the mid-level action movie almost singlehandedly afloat. (By comparison Dwayne Johnson, who starred in Waugh’s “Snitch,” leveled up and never looked back.) But the sad fact is that no matter how hard Butler works, badly-animated explosions and CGI smokescreens — of which there are very many — simply do not cover up the biggest thing that these movies lack, which are fresh ideas or even just solid, straightforward execution.

This third film is built on a premise that conspiracy theorists would laugh out of a 4Chan chatroom, when what the series needs, and what makes it work when it occasionally does, is the simple humanity of a man doing his job because it’s the right thing to do. Butler’s willingness to try and recapture that each time out is admirable, but “Angel Has Fallen” has all but run out of reasons why we would want to see Mike Banning rise again.