Channing Tatum Enjoys A Bath With A Puppy In His New Movie ‘Dog’: Watch Trailer

Channing Tatum becomes a pet owner in the upcoming movie ‘Dog,’ caring for a Belgian Malinois named Lulu in the most unlikely of ways. Check out the heartstring-tugging trailer here!

Channing Tatum and an adorable canine make the perfect pair in the new movie Dog, whose trailer just dropped on Wednesday. In this buddy comedy, Channing stars as Army Ranger Briggs accompanied by a Belgian Malinois dog named Lulu for a trip down the Pacific Coast. The two are headed for a fellow soldier’s funeral and end up becoming more attached along the way, “[learning] to let down their guards in order to have a fighting chance of finding happiness,” according to a press release.

The trailer shows the duo’s various shenanigans throughout the trip, including a scene toward the end where Channing’s Briggs gives the dog a bath while taking it with him. “You’re definitely not the girl I thought I’d be in the tub with,” he says in the clip. “But I’ll take what I can get at this point, I guess.”

Channing took on the flick as co-director with Reid Carolin, one of his partners in the Free Association production company (the other partner is Peter Kiernan). The partners signed a first-look deal with MGM for the project, and it stands as the directorial debut for both Channing and Reid. All three men described the collaboration with MGM film group chairman Michael De Luca and president Pamela Abdy as “diving intervention,” sharing how thrilled they were to bring the story to life.

“We deeply admire their taste, and truly could not be more excited by their vision for the studio,” the trio said in a statement, per Variety. “We’re still pinching ourselves that we get to call MGM home, and we can’t wait to work with the entire team there for years to come.” 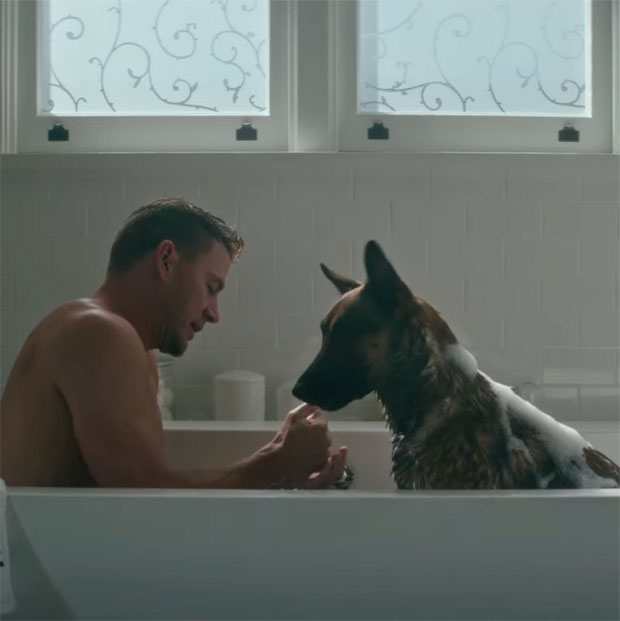 Channing also took to his Instagram in Sept. 2020 to share details from filming and to celebrate how much he loved working on the project. “This photo is from our first day of production on the first movie that my partner Reid and I are directing. This is our story,” he wrote in the caption. “It’s taken us two years to get it to the starting line. The next eight weeks will be like riding a bull on sickmode in ludicrous speed. God be with us. In Dog we trust.”