13 months after losing his MSNBC show, Chris Matthews paid a visit to his replacement to talk about his new book and during their chat, he cheerfully admitted that his exit from the cable news network was because he “did something wrong.”

Matthews’ fall, from MSNBC centerpiece to being fired, happened rapidly just days before the start of the COVID-19 pandemic. On Feb. 28 2020, a journalist accused him of making inappropriate comments to her when she was a guest on his show. The accusation came just as Matthews was already enduring heavy criticism for making what many observers said were sexist remarks in a post-debate interview with Elizabeth Warren during the Democratic primary. On March 2, Matthews abruptly announced his retirement and apologized for his prior behavior.

His time slot was eventually filled by Joy Reid’s “The Reid Out.” So it is that during Tuesday’s episode of “The Reid Out,” Matthews and Reid briefly touched on those circumstances. “I know the reason I left. Somebody reported that I complimented somebody — actually, I’m going to use the right words here — I commented, remarked on somebody’s appearance in the makeup room, and I shouldn’t have done that. Nobody has to come defend me,” Matthews said. 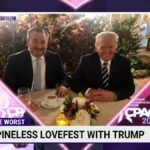 “And by the way I kept all my friends but nobody needs to defend me, I did something wrong,” he continued. So I’m gonna move on from that, I accepted ownership of it, using a nice modern phrase, I took complete ownership, I did not deny it, I lost my show over it. So that’s it, that’s the truth.”

It’s not the first time Matthews has owned up to what happened, however. In April 2020, he told Vanity Fair that the whole thing was “highly justified.”