The actress, who plays the unflappable aristocrat daughter of Hugh Bonneville’s Lord Grantham, wore a plastic full-face visor between takes on location in Harwich, Essex. Michelle, 39, was joined by new co-star Hugh Dancy as she observed Covid precautions on set. Dressed in character, the actress wore a long purple midi skirt with a matching patterned top. 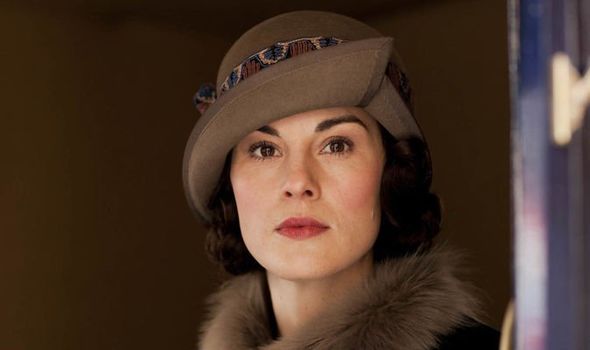 The elegant ensemble was completed by a dusty pink coat with a navy hat and gloves. Perfect for a spin in a car of the era.

British actor Hugh, 45, looked dashing in grey pinstripe trousers and a beige tailored coat. The Hannibal star, who is married to US actress Claire Danes, is one of numerous new faces.

The others are Dominic West, currently in BBC One’s The Pursuit of Love, Laura Haddock of TV drama The Capture and French actress Nathalie Baye from the film Catch Me If You Can.

The first Downton movie made £135million in 2019 after six series on ITV. Hugh Bonneville revealed the production, set for a Christmas release, got under way last month by tweeting: “Good to be back.”

Most of the action is filmed at Highclere Castle in Hampshire.