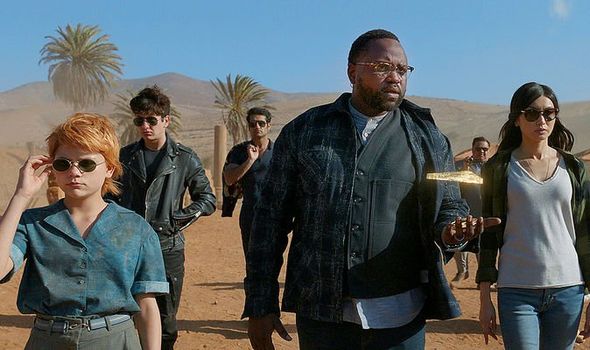 With 10 superheroes to introduce and millennia of backstories to plough through, this 157-minute slog requires superhuman levels of endurance. The hard work begins with opening Star Wars-style text which introduces the god-like Celestials, led by the mighty Arishem, who created and controls the universe.

When forgettable CGI monster Deviants invaded Earth, Arishem created the Eternals, yet another superpowered tag team to act as the planet’s protectors.

An action scene in “5000BC Mesopotamia” shows us the near-immortal Eternals in action.

As the prophet-like Ajak (Salma Hayek) is the only one Arishem talks to, she operates as a sort of manager figure, orchestrating the action from the sidelines.

Most of the film takes place in the modern age as the banished Deviants return to usher in the Apocalypse, and the Eternals come out of hiding to trade weak banter.

Zhao freshens up the formula with handsomely shot but momentum-sapping flashbacks set in ancient civilisations.

But a director famed for intimate dramas always felt like a bizarre choice for a Marvel epic.

Weirdly, her action scenes, though middling, are more memorable than her characters.

The Eternals are a photogenic and refreshingly diverse bunch but they aren’t much fun to hang out with.