Home » Movies » Even During the Oscars, the Union Station Trains Will Run on Time

Even During the Oscars, the Union Station Trains Will Run on Time And for a change, the subway stop beneath the Dolby Theatre will remain open during the Oscars, even though part of the show is taking place there 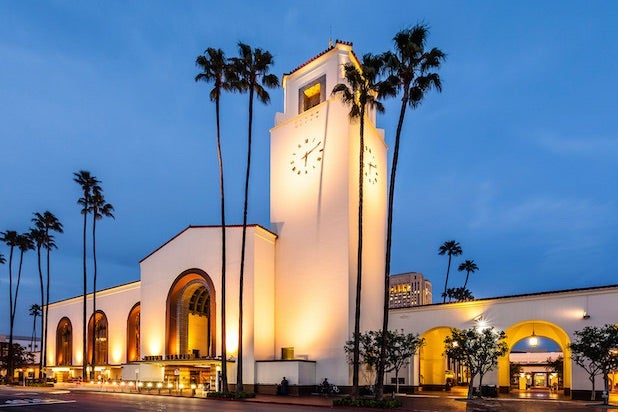 One of the strangest things about the Academy’s plan to hold this year’s Oscars at Union Station in downtown Los Angeles isn’t that they’re putting on an awards show in a train station, though that will be a first. Rather, it’s that they’re planning to put on the show in a transit center that will remain open, without shutting down or seriously affecting the usual operation of that center.

That’s not the way the Oscars usually work. For the past 19 years, the ceremony has been held at the Dolby Theatre in the Hollywood & Highland Center – and on the day of the show, the Metro subway stop beneath the center is always shut down. Some surrounding streets are also closed and blocked off for several days prior to the show.

But this year, L.A. Metro does not anticipate changes in any Union Station bus or rail schedules, with the station remaining open even during the April 25 ceremony. Although the Oscars are scheduled to use significant portions of the celebrated Mission Moderne building, including the Historic Ticketing Hall, Grand Waiting Room, north and south patios and main entrance on Alameda St., L.A. Metro wrote on its website this week, “Union Station will remain open to transit riders throughout the awards events and riders will be able to access all bus, rail, Metrolink, Amtrak and private transportation providers, along with vendors.”

An L.A. Metro spokesperson told TheWrap that some bus lines on Alameda in front of the station would undergo detours on the day of the show, but that it was a priority in their discussions with the Academy that the show cause as little disruption as possible to all transit services.

In addition, the spokesperson said, L.A. Metro does not anticipate closing the Hollywood & Highland subway stop this year, even though portions of the Oscar show will take place at the Dolby Theatre.

The reduced footprint for this year’s Oscars is possible because it will be a much smaller event, with attendance restricted to nominees, their guests and presenters.

Travelers who normally enter the complex through the Union Station West building will be able to instead access transportation services through the Union Station East building, which occupies the opposite side of the Amtrak and Metrolink tracks. Signs both on surrounding streets and inside the station will indicate the detours that will be in effect because of the Oscars.

Some detours had already been in place recently because of renovations to the ceiling of the Grand Waiting Room. Those renovations will be completed before the Oscars ceremony.