For Kevin Hart and Tiffany Haddish, comedy is more than making jokes

Forget Daniel Day-Lewis living in the wilderness before making The Last of the Mohicans, Viggo Mortensen staying silent for weeks to play a mute in The Passion of Darkly Noon or Leonardo DiCaprio sleeping in animal carcasses and eating raw bison liver for The Revenant.

Kevin Hart reckons he dug himself into a rabbit burrow for The Secret Life of Pets 2. 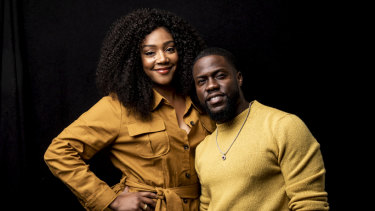 Tiffany Haddish and Kevin Hart in Sydney for the premiere of The Secret Life of Pets 2.Credit:Dominic Lorrimer

"You gotta go deep," he said. "I think I spent two months with rabbits. It was tough, listening to them, watching how they hop, eating carrots, what upsets them, what doesn't upset them, the family hole thing.

"There was a while when all I ate was carrots."

The Hollywood comic actor, who has been on a career rollercoaster after the success of Jumanji: Welcome to the Jungle and his surging producing career was followed by the disappointment of dropping out of hosting the Oscars because of past homophobic tweets, is visiting Australia with co-star Tiffany Haddish for the premiere of the animated sequel at the Sydney Film Festival.

While Hart voices a rabbit named Snowball, Haddish took a far less "method acting" approach to playing a tiny dog named Daisy in the comedy about pets rescuing a tiger from a circus.

After the original The Secret Life of Pets took $US875 million ($1.25 billion) at the worldwide box office, there was always going to be a sequel. But as Haddish and Harrison Ford joined the cast, another star was kicked out of the pound, with Patton Oswalt taking over as lead dog Max after Louis C.K. admitted to sexual harassment.

While Hollywood animated movies are sunny family entertainment, that can sometimes mask the struggles their stars have gone through. 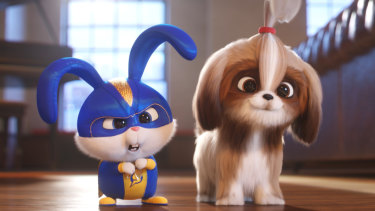 Voiced by Kevin Hart and Tiffany Haddish: Snowball and Daisy in The Secret Life of Pets 2. Credit:Universal

Haddish, whose career taken off since the 2017 hit Girls Trip, dates her interest in comedy back to talking excessively and creating imaginary friends while growing up in foster care in Los Angeles after her mother was diagnosed with schizophrenia. She later spent time living in her car while trying to make it as a comic.

"Comedy was a defence mechanism for me at first," Haddish said. "I was good at using that tool.

"My social worker noticed it, got me into comedy camp, then I met a lot of really great comedians that really inspired me.

"The first time I got paid fifty bucks outside the Laugh Factory comedy club, I was like 'Yeah, this is what I'm going to be doing'. I only had to do 15 minutes and I was horrible and they still paid me." 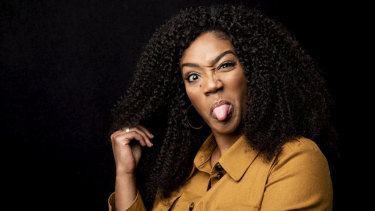 While Hart did not want to talk about the Oscars, there was a veiled reference when he said his comedy was changing as he evolved as a man.

"If I've experienced it, I'm going to talk about it – good, bad, ugly," he said. "As you grow, there should be progression within your craft.

"If you go back and look at all my comedy, you'll see where I was in my life and how I got to where I am now and the man that I'm now becoming. I can only hope that it continues to grow and evolve because that would mean that I would be doing the same." 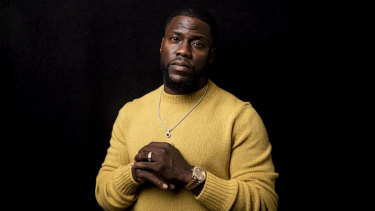 So are there topics he can no longer joke about?

"I don't think it's about stopping yourself," Hart said. "You can still be funny but you can be respectful because times have changed.

"The censorship that goes within joking is at a code red [for] what's considered hurtful, damaging and just wrong. Rightfully so … It's our job as comedians to simply observe, understand, stay true to ourselves and be respectful."

On her first visit to Australia, Haddish was shocked at the currency conversion that meant tickets to her Sydney comedy show on Wednesday night cost just $US11.