Early in Michael Mann’s 1995 crime drama “Heat,” his protagonist destroys a television set. It makes sense in the context of the film (well, sort of), but it also can be read as a wink: Mann, a writer, director and producer who made his name with the TV smash “Miami Vice” (not to mention “Crime Story”), taking a moment from his star-studded, big-screen epic to bite the hand that fed him.

But that moment also plays as a swipe at the picture’s obscure origins; even as “Heat” turns 25 on Tuesday, it has remained relatively unknown that it was, in fact, a remake. Mann had already told this story — using many of the same scenes, and even some of the same dialogue — in a 1989 NBC TV movie called “L.A. Takedown.”

That project was a mere rest stop on the long, winding journey that “Heat” took to the big screen. Mann first penned the screenplay in the late 1970s, inspired by the real-life relationship between a Chicago cop, Chuck Adamson, and a master thief, Neil McCauley. The script was long, 180 pages, and so ambitious that Mann wasn’t sure he could handle it; he offered it to the director Walter Hill (“48 Hrs.”), who declined. Mann kept revising the script through the 1980s as he found success on television, and when NBC asked if he had any other series ideas when “Miami Vice” was winding down, he determined he would adapt his mammoth screenplay into a series pilot. 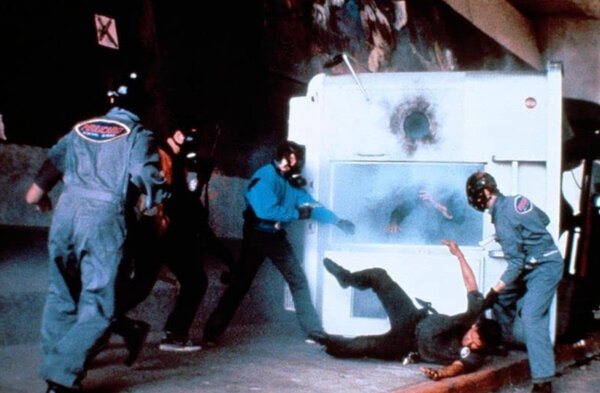 “I abridged it, severely,” Mann explained in a 1997 BBC featurette, slicing some 70 pages from the script. “Takedown” was shot in a mere 19 days; he would eventually enjoy a 107-day shooting schedule for “Heat.” “So to compare one to the other in experiences is kind of like comparing freeze-dried coffee with Jamaican Blue Mountain,” Mann explained. “It’s a completely different kind of undertaking.”

He’s right, of course. Comparing a big-budget studio film and a quickie TV movie is a fool’s errand (and undeniably unfair to the latter). But in considering “Heat,” which is quite possibly Mann’s best film and certainly his definitive one — the purest distillation of the themes and preoccupations that have consumed him throughout his career — it’s helpful to look at the film in its embryonic form, and to see what Mann retained (an interest in crime, punishment, and the way fast cars stab through the Los Angeles night), what he changed and what he added.

The broad strokes are the same. “L.A. Takedown” begins with a thief — Patrick McLaren, played by Alex McArthur — leading his crew on a tightly timed armored-car robbery that ends up leaving three guards dead. Heading the police investigation is Sgt. Vincent Hanna (Scott Plank), who pursues the thief with a mixture of dogged determination and reluctant admiration: Asked for the M.O. of the thieves, Hanna replies, “Their M.O. is that they’re good.” Hanna and his Robbery Homicide Division detectives surveil McLaren and his team as they try to put together one more big score, a broad-daylight bank robbery that results in a dangerous shootout in the streets.

What makes “Heat” so special is the attention Mann pays to the complexities and humanity of both cop and criminal. Rather than the typical construction of antagonist and protagonist, he gives us, essentially, two protagonists — both skilled, flawed, sometimes sympathetic, often less so — and positions them in opposition, but with no clear “good guy” or “bad guy.” The film is constructed as a series of points and counterpoints: cop (Al Pacino) and criminal (Robert De Niro), good and bad, light and dark. Throughout “Heat,” Mann is telling these stories in parallel, underscoring their similarities with scenes, conflicts and characters serving as direct complements to each other.

This careful character construction, and its balance of screen time and sympathy, is why the now-legendary scene in which cop and criminal sit down for coffee and conversation carries so much weight. Neither raises his voice and neither loses his cool. They speak from a place of mutual respect, even affection; it’s like a first date, two people marveling over all they have in common. “I do what I do best — I take down scores,” De Niro’s McCauley (as he’s called in this version) notes. “You do what you do best — try to stop guys like me.”

“I don’t know how to do anything else,” Pacino’s Hanna says, to which McCauley replies, “Neither do I.”

“I don’t much want to,” Hanna adds, to which McCauley again replies, “Neither do I.” And that, in many ways, is the whole movie, in one exchange.

But that equal distribution of narrative weight and sympathy isn’t present in “L.A. Takedown,” which is much more about Hanna than his target — and that makes sense, since it was intended to be the first episode of a weekly cop show. That’s not all that gets streamlined; themes are bluntly stated, complex relationships are sanded down, and the good guy-bad guy dynamic is vastly simplified. If “Heat” is like an opera, “L.A. Takedown” is like its libretto — the words, but not the music.

(NBC passed on the series, and that’s how “L.A. Takedown” became a one-off TV movie. Seven years after “Heat,” Mann would finally produce something equivalent to that series with “Robbery Homicide Division” on CBS, featuring the “Heat” co-star Tom Sizemore in a Hanna-ish role.)

“Heat’s” path from small to big screen isn’t unprecedented. The early days of television was filled with big-screen remakes of recent live television dramas like “Marty” and “12 Angry Men.” The evolution of “Heat” was unusual for the era, but the embryonic workshopping of the TV movie proved a key step in the picture’s development, and Mann’s understanding of the material. “‘L.A. Takedown,’ to me, constitutes something that I’d like to do actually on every film, which is get a chance to shoot a prototype — to learn what’s wrong and play around with it,” Mann told the BBC, likening the experience to an out-of-town tryout for a Broadway-bound play. When he returned to the screenplay, after the cinematic success of his 1992 adaptation of “The Last of the Mohicans,” he could more clearly grasp its strengths and its weaknesses.

But he could also see the value of the extraneous scenes and threads he’d sliced away to fit the massive script into that narrow television time slot, and restore them. What ultimately makes “Heat” so much more than a cops-and-robbers movie is Mann’s huge canvas, which has room for plotlines and characters that could sustain films of their own: Hanna’s suicidal stepdaughter, the money launderer who makes the mistake of tangling with McCauley’s crew, the thief who moonlights as a serial killer, the noble ex-con trying (and ultimately failing) to go straight. The original marketing of “Heat” billed it as “A Los Angeles Crime Saga,” and that wasn’t hype or hyperbole — only a capital-S Saga can cover this much ground.

Viewed in retrospect, “L.A. Takedown” underscores the eventual genius of “Heat”: When you boil this narrative down to its basics, to plot and even some dialogue, it’s a fairly plain (pedestrian, even) crime picture. It was all of Mann’s subsequent flourishes, all the details and atmosphere and character touches, coupled with the game-raising skill of a once-in-a-lifetime ensemble cast, that made “Heat” the classic it has become.