Composer Kris Bowers wasn’t even 10 years old when Venus and Serena Williams competed in their first matches on the professional tennis tour. But within Bowers’ own family were the ingredients that made him an ideal candidate to score “King Richard,” director Reinaldo Marcus Green’s biopic about the sister’s ambitious father, Richard (played in an Oscar buzzworthy performance by Will Smith).

“My own dad was inspired by the Williams sisters and Richard Williams,” Bowers explained with a smile in this new episode of TheWrap’s “How I Did It” video series. “My dad decided before I was born that he wanted me to play piano. [My parents] really did everything they could to put me in the best situations to succeed because they wanted to make sure we had a chance to achieve something great.”

Bowers not only achieved something great with “King Richard,” but did so using the same instrument that his own father dreamed that he would master. The piano is critical to the success to Bowers’s score — both to emphasize familial warmth in the film, but also cleverly as a percussive vehicle for understanding the sport of tennis.

From inside the Warner Bros. Eastwood Scoring Studio in Burbank, California, Bowers explained what is known in music parlance as a “prepared piano.” At first sight, it almost looks like someone has left their laundry to dry on the piano strings. Instead, he said, the term refers to “putting anything you can think of inside of a piano, like nails, coins, pieces of paper.”

The technique dulls the strings’ vibration but, as in “King Richard,” produces a sound resonating with piercing, unique power. “In the beginning of the tennis match [in the film], we strip everything down just to prepared piano, so that it feels incredibly tense. And I wanted to create this rhythmic drive, so that the ball hitting felt like it was part of the music and the hits were almost punctuating parts of the score.”

Bowers, whose credits also include “Respect,” “When They See Us” and “Bridgerton,” also described how he used the piano score to weave together his individual musical themes for Venus, Serena and Richard in the film.

For more, including an endearing home movie video of Bowers playing a Billy Strayhorn jazz standard on the piano as a boy, check out the video above.

“King Richard” is currently playing in theaters and streaming on HBO Max. 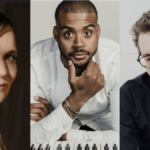