How the Michael Myers Mask Changes in the Halloween Movies The Shape has had many shapes over the years. 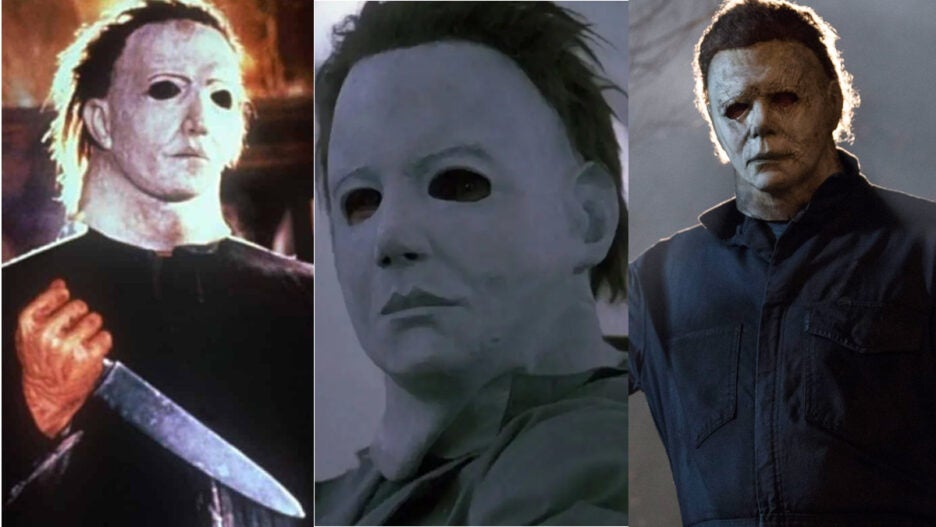 With 13 films to date and two full-on reboot attempts, the “Halloween” franchise is one of wild variety. Even Michael Myers, the iconic villain at the heart of “Halloween,” doesn’t appear in all of the films. But since John Carpenter’s groundbreaking 1978 horror masterpiece, audiences have been enamored with the mystery surrounding this franchise, and the man behind the mask. That mask, however, has evolved significantly as the franchise has worn on. So with “Halloween Kills” due to be released on October 15, let’s take a trip down memory lane to see how the Michael Myers mask has changed over the last four decades.

The original Michael Myers was simply a Captain Kirk mask that producer Tommy Lee Wallace adjusted by removing the eyebrows and sideburns, changing the hair, and painting white. And thus a horror icon was born.

The sequel to the first film uses the original Shatner mask, although this time it’s been weathered after use during production and the three-year gap between films.

For 1988’s “Halloween 4: The Return of Michael Myers,” the filmmakers started from scratch with a brand new mask. One that has forever been the subject of ridicule for fans of the franchise.

If you thought things couldn’t get worse than the “Halloween 4” mask, the unintentionally hilarious mask used for “Halloween 5″ is definitely a dark mark on the franchise.

An improvement to be sure, the mask for the cult-themed “Halloween 6” gets a bit more rough around the edges.

Jamie Lee Curtis’ triumphant return to the franchise coincided with the arrival of CG-effects, which were used ineffectively in some scenes to enhance the mask. However, the main mask for the movie is similar to the one used in “Halloween 6.”

The one and only “Halloween” movie to feature Busta Rhymes also features a wholly forgettable upgrade of the iconic mask.

Rob Zombie’s divisive remake of John Carpenter’s original film is a gritty and grimy take on the franchise, which extends to the scar-filled mask used for Michael Myers.

Rob Zombie deviated even further from the iconography in the franchise with his sequel, which features a grotesque mask that’s falling apart, thus revealing Michael Myers’ true face.

Director David Gordon Green’s direct sequel to the original “Halloween” embraces the iconography of the film that started it all, returning to a more classic look for the mask.

The sequel to 2018’s “Halloween” picks up where that film left off, and thus Michael Myers’ mask bears the burn marks from that movie’s finale.