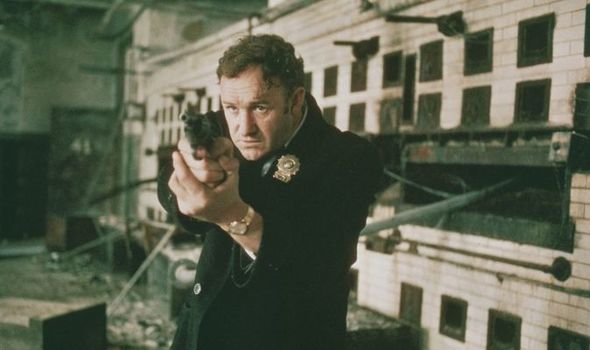 Released in UK cinemas 50 years ago, The French Connection starred Gene Hackman as the ragged, racist, profanity-spewing Detective Jimmy “Popeye” Doyle. In the movie’s most famous scene he drives a souped-up Pontiac across Brooklyn to chase an elevated subway train.

The movie won five Academy Awards (including Best Picture) and ushered in a new era of movie making for the 1970s.

A grittier, more chaotic, more hard-boiled portrayal of US cities and police forces came to the fore – steeped in decline and immersed in grime, decay and corruption.

As borderline fantastical as the narrative of the movie may seem, the plot was based on a real heroin smuggling ring.

The film is based on Robin Moore’s 1969 book of the same name, which follows the work of NYPD Detective Eddie Egan, inspiration for Gene Hackman’s “Popeye”.

Egan had a similar reputation for a short temper and a long arrest record. It’s said he put nearly 10,000 people in handcuffs during 15 years on the force.

Egan himself made a cameo in the movie as Popeye Doyle’s boss while Doyle’s sidekick Buddy Russo (played by Roy Scheider) is an almost carbon copy of Egan’s real life partner, Sonny Grosso.

It was back in 1962, almost a decade before the film was released, that detectives Egan and Grosso began work in tracking down Jean Jehan – a Corsican upon whom the suave Charnier character was based.

Marseille had long been a processing centre for heroin, brought in from the former French territories that encompass what today are Laos, Thailand and Myanmar.

Corsicans who stayed on after the Second World War became involved in the drug trade. Few were more successful at the racket than Jehan.

He was one of the Corsican mobsters who rebuilt the “French Connection”, the alias for the heroin trade between France and the American mafia families. The link had been destroyed by Nazis during their occupation of Vichy France.

Incredibly, much of the money for the connection between Asia, Marseille and the US came from French intelligence and the CIA, who would use the muscle of the Corsican mafia to rid Marseille of Communist influence.

The legitimate profits from this were, naturally, poured back into the heroin trade.

For the connection to work it relied on co-operation between the Corsicans in Marseille and the Italian mafia families of New York. The deal appears to have been that if the Corsicans agreed to only sell their drugs to Italian families in the States, then the Italian mafia in New York would insure that the European-based Italian mafia would not muscle into the market and attempt to take it for themselves from the French.

By the 1960s it was thought this re-established connection between the States and France was responsible for as much as 80 per cent of the heroin coming into the US, with Jehan at the heart of operations.

His taste for the high life was transposed on to Charnier’s character in the movie, where we see him lingering over fine restaurant lunches while Popeye eats cold pizza outside. But despite adoring the trappings of the rich, Jehan never got complacent.As far back as 1953 he was said to be the ringleader of a heroin shipment smuggled from Le Havre to New York via Canada.

Mounties from Canada reported, six years later, that Jehan was the co-owner of a nightclub in Montreal that was “of bad reputation”. This scant information was all the Canadian and American police had on Jehan until the French Connection bust of 1962.

It was in that year, perhaps the peak of a veritable golden age for the Corsican heroin kingpins, that Jehan coerced a TV actor named Jacques Angelvin to smuggle 97lbs of heroin into Manhattan, hidden in his 1960 Buick Invicta, which arrived in the Big Apple aboard an ocean liner.

The plan was for the heroin to be handed over to low level mafia members Anthony and Pasquale Fuca. Yet a telephone call from Jehan to the brothers was tapped and Egan and Grosso were on their trail.

Arriving into the Hudson aboard the liner on January 10, it took barely a week for Egan and Grosso to get their hands on the narcotics buried in the Buick.

Two busts, one in Brooklyn on January 18 and another a month later in the Bronx, recovered 97lbs of heroin in total.

It was one of the largest drug busts in American history .

But Jehan, whom Egan and Grosso called Frog One, would never see justice.

While the Fuca brothers spent over a decade in jail and the hapless French actor Angelivin also went to prison, Jehan hot-footed it to Canada and back to France.

It was only five years later in 1967 that the French authorities finally caught up with Jehan.

Then in his mid-70s, the police decided not to extradite him to the States to face trial due to his age. The last sighting of Frog One was believed to be in 1977 when he was spotted sipping wine on a restaurant terrace in the Cote d’Azur.

“We kept outstanding warrants for him, and we had different tips that he was spotted all over Europe, but we never found him,” Grosso later said. While Jehan enjoyed his retirement, the real life French Connection crumbled.

By 1973, a concerted effort by international law enforcement broke the association, only for Mexican crime syndicates to enter the new power vacuum.

Despite having succeeded in pulling off one of the greatest drug busts in history, Egan left the NYPD shortly after the release of the movie that retold his exploits from a decade before. Irritated with his newfound fame, the department dismissed him hours before he would have been eligible for early retirement.

After failed attempts to run a bar and a private detective agency, Egan had his house repossessed and, with no alternatives, decided to capitalise on his cameo role In the movie’s.

The Hollywood connection paid off with Egan becoming an indemand actor with roles in TV show’s such as TJ Hooker and Police Story throughout the 1970s and 80s.

Egan died in 1995, his real life uniform long since hung up and with Jehan believed to have died many years before.

Interviews from his latter days suggest Egan never quite got over his unceremonious exit from being a New York super cop. “All those years I was a cop and had to act like a civilian,” he told one interviewer in the late 1970s. “Now I’m a civilian and have to act like a cop.”