Joe Keery didn’t have a cheat code to getting cast in Free Guy. Despite having starred in three seasons of Strangers Things — which is executive produced and frequently directed by Shawn Levy — the 29 year old still had to audition the old-fashioned way for Levy’s newest big screen blockbuster. “Obviously, we had a relationship from working on Stranger Things,” Keery says over Zoom. “But besides that show, I really haven’t done too much stuff. So, I kind of had to prove that I could do it.”

Knowing he had an ally on the other side of the audition process assuaged some of Keery’s nerves, though he admits it was a double-edged sword. “Maybe you go in and you bomb, and then is it weird?” It’s a question he still doesn’t have the answer to, because Keery booked a part in one of the summer’s most anticipated movies. (Both Summer 2020, when it was originally slated to release, and now summer 2021 when it’s finally hitting theaters.)

Free Guy revolves around an open-world video game called “Free City,” in which a background character named Guy (Ryan Reynolds) discovers his entire world has been programmed. Keery plays the real-world programmer, Walter “Keys” McKeys, who developed the game and at one point, finds himself inside it, protecting and serving as a porn-stached Free City police officer.

“You’re on set and you’re chasing Ryan around. It’s just crazy. It was so much fun though, and pretty immersive as well,” he says, confessing he was in a constant state of geeking out during filming. “Every single day. Especially just like, how am I working with these people? Who let me on this set to do this?!” 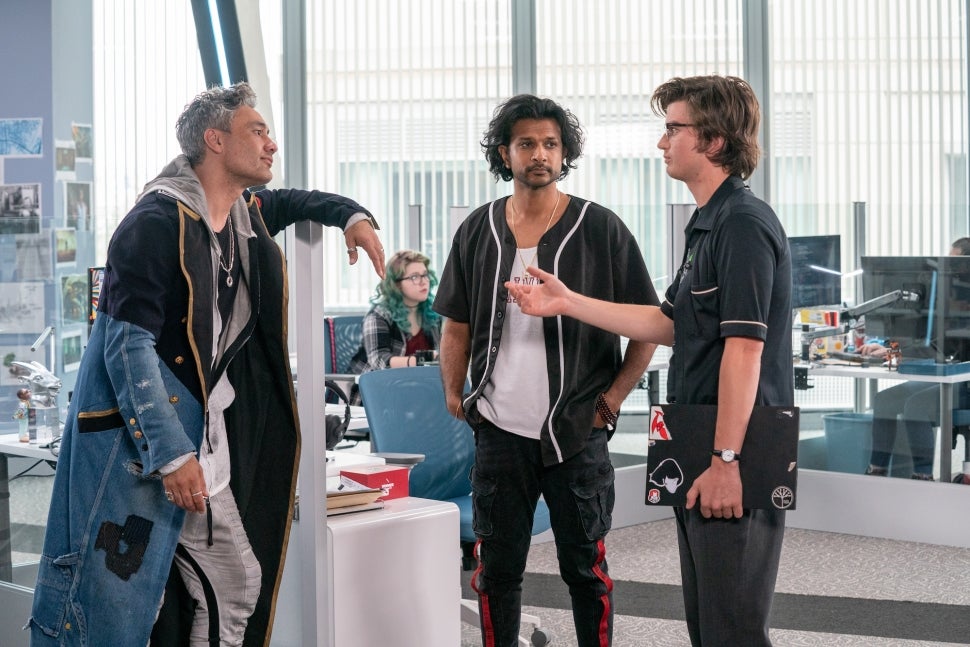 “Ryan’s so good at, like, the bright-eyed, bushy-tailed, unaware sort of [thing]. That whole sequence where we’re grilling him was so fun,” Keery reasons when asked whether it was harder not to break around Reynolds or co-star Taika Waititi. Since most of his scenes are opposite Waititi, who plays the megalomaniac boss of the company that created Free City, “Taika had a lot more opportunities, and he got me. He did get me a lot.”

“Both guys, you’ve seen their work. They are so good at what they do. It is kind of like, wow,” Keery says. “So, sometimes I would be in a scene and realize like, ‘Oh, shit. I’m just watching you.’ What a rush, though, to work with them.”

Even though Keery’s character serves as a straight man in the movie, Free Guy was something between a crash course and a masterclass for him. “I had a lot of expositional work, and to make that feel real especially when you’re going off of Taika, who is like bbrrt bbrrt bbrrt” — he mimics a machine gun noise — “an improv barrage, it was a fun challenge, it really was. On those days, I had Utkarsh [Ambudkar] there as well, who’s just a real improvisational genius.”

After spending take after take, week after week stifling his own laughter lest he break during Waititi’s onslaught of alt lines, he remembers the day he left set feeling like he’d held his own. “I remember I made Taika sort of giggle a little bit,” Keery says. He made Taika Waititi break. “I made him laugh and I was like, ‘Yes!‘ It felt good.”