Katherine Newbury, the broadcasting legend played by Emma Thompson in “Late Night,” is the first-ever, longest-running female host of a post-primetime network talk show. A onetime peer and rival of Leno and Letterman, she has outlasted them, surviving into the era of Fallon and Colbert. Some of those names are dropped (and Seth Meyers shows up for a cameo), but Katherine is of course a fictional character. You might even say she’s like a sparkly unicorn or a city-crushing kaiju — a wholly fantastical creature.

Not that this smart and breezy film, directed by Nisha Ganatra and written by Mindy Kaling, is especially implausible, other than in the usual charming, comedic ways. Kaling, for example, plays Molly Patel, who joins Katherine’s writing staff after working at a Pennsylvania chemical plant, a career transition explained with a pretty good throwaway joke. The movie’s overall picture of television, though, is drawn from life, and from Kaling’s long experience as a writer, producer and performer. What’s striking is that, in order to satirize the actual sexism of the industry, Kaling and Ganatra have had to imagine the TV world as just slightly less sexist than it may actually be.

To put it another way, Katherine’s existence registers as a protest against the narrowness of American show business precisely because she’s such a vivid, complicated, believable person. You can easily fill in the arc of her career — a few fake-vintage video clips are provided to help with the effort — from the early ’90s until now. Thompson invites you to appreciate both Katherine’s seamless professionalism and the effort that goes into sustaining it, much as Garry Shandling did with Larry Sanders back when Katherine would have been in her prime.

But now, as the events of “Late Night” unfold, that prime is fading. Honestly, whose isn’t? Nothing is what it used to be. The best lack all conviction, the worst are full of passionate intensity, what rough beast slouches — you know how it goes. (Though the Yeats poem quoted in the movie is a different one.) After nearly 30 years on the air, Katherine’s act has grown a little stale, to her viewers and herself. (Not Thompson’s, though. This is some of her very best work, which is saying a lot.) 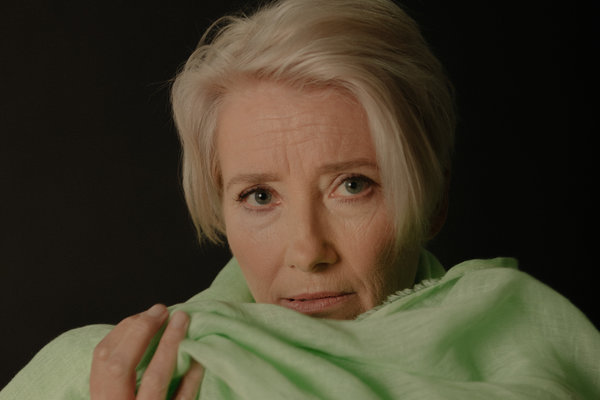 The network’s new boss (Amy Ryan) is looking for new blood. A youngish white guy (Ike Barinholtz) with an obnoxious anti-P.C. shtick is waiting in the wings to take over when Katherine is eased offstage. She still brings a brainy guest list and a brisk, skeptical British sensibility to her time slot, but whatever edge Katherine might once have possessed has been dulled — by success, by fatigue, by the illness of her husband (John Lithgow), by too long a soak in the lukewarm waters of the mainstream.

“Late Night” happily splashes around in those same waters. Rather than scourging the complacency and hypocrisy of television, it subjects the medium to a vigorous exfoliating scrub in the name of feminism and inclusiveness. The humor, though sharp, is cruelty-free. The benefit of the doubt is extended even to the men who have benefited from the old-boy networking that has kept Katherine’s writing staff entirely white and male. They’re not bad guys, just beneficiaries of a rigged system. Kaling’s view of the landscape and its inhabitants — the imperious star, the neurotic writers, the beleaguered producer (Denis O’Hare) — is critical without cynicism or even much anger. 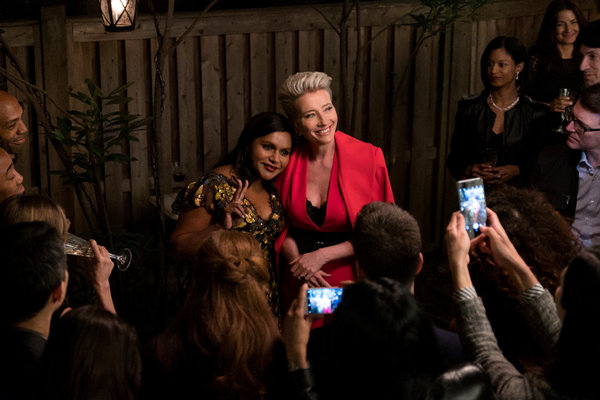 The democratic, affirmative nature of television itself is what enables problems of access and representation to be solved. What’s needed, and what Katherine has lost, is faith. “I love television,” says Molly, and Kaling and Ganatra (whose many small-screen directing credits include “Transparent,” “Better Things” and “Brooklyn Nine-Nine”) clearly share that affection. The sincerity is disarming. It makes Katherine uncomfortable. You’d never hear Liz Lemon — or for that matter, Tina Fey — make such a declaration. Since the earliest days, the way to seem smart about television has usually been to act smarter than television, even when you’re on television. Molly, giddily happy about her job and earnestly committed to doing it well, refuses this attitude of superiority, and so does “Late Night.”

Katherine, who reads jokes written by guys whose names she hasn’t bothered to learn, is the embodiment of legacy-media arrogance. She’s proudly clueless about the internet, and disdainful of newer forms of entertainment, especially those embraced by women. When she condescends to a young social-media influencer who has been booked on the show, the guest storms off, and the moment goes viral. The Twitter mob is not on Katherine’s side, and neither is the movie, which takes her humiliation as a teachable moment. Her feeling of superiority is a self-undermining defense against her own irrelevance. She has lost touch with the sources of her appeal, and needs to reconnect with the energy and vitality of the present, as well as with her own dormant feminist instincts.

There are times when the movie loves TV so much that you get the feeling it would rather just be TV. A whole sitcom-season’s worth of story is shoehorned into less than two hours, as subplots and secondary characters that might have filled up half an episode are confined to a few swift beats. This is as much a compliment as a complaint, or at least a way of acknowledging the strength of the cast and the writing. But there’s a lot to keep track of. Molly’s battle of wills with one co-worker (Reid Scott) and her ill-advised romance with another (Hugh Dancy); Katherine’s marriage, her conflict with the network, her mental-health issues, her sex scandals. It all moves along at a snappy enough pace, but sometimes feels more facile than insightful.

The insights are real, though, and the overall resistance to cliché is admirable. Every time you think “Late Night” is settling into familiar tropes — about workplace politics, mean bosses, long marriages, fish out of water, bootstraps and how to pull them — it shifts a few degrees and finds a fresh perspective. It argues that entertainment benefits from the presence of different faces and voices not by preaching but by example. And while you may or may not be persuaded by the thesis that it’s possible to be funny without being mean, in Katherine’s presence that question is moot. She’s something not many movie characters are allowed to be, at least not to this extent. She’s interesting.

A.O. Scott is the co-chief film critic. He joined The Times in 2000 and has written for the Book Review and The New York Times Magazine. He is also the author of “Better Living Through Criticism.” @aoscott