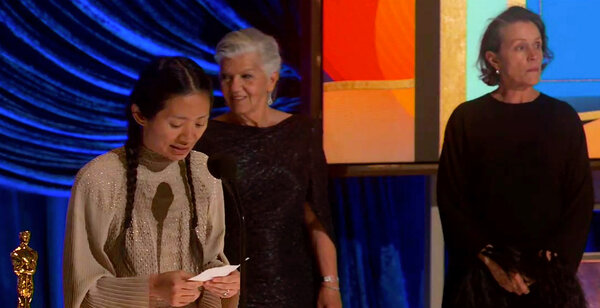 With a howl from its lead actress, “Nomadland,” a drama about itinerant workers in the American West, was named best picture.

The story of widow, played by Frances McDormand, who hits the open road amid the recession in the American West, the movie had been sweeping up honors all awards season. In her speech accepting best picture, the star, who was also named best actress, gave a howl, but first urged audiences to “please watch our movie on the largest screen possible, and one day very, very soon, take everyone you know into a theater, shoulder to shoulder in that dark space, and watch every film that’s represented here tonight.”

The film was directed by the Chinese-born filmmaker Chloé Zhao, who earlier in the evening was named best director. It is only the second movie from a female director to take Hollywood’s top trophy (the first was Kathryn Bigelow’s “The Hurt Locker” in 2010). “Nomadland” is also the first best-picture winner directed by a woman of color.

Accepting the award, Zhao thanked “all the people we met on the road,” and added, “Thank you for teaching us the power of resilience and hope and for reminding us what true kindness looks like.”