When the British filmmaker Steve McQueen conceived the five films he collectively named “Small Axe,” he could not have foreseen the drastically disrupted world into which they would be released — a world that could shift, and perhaps intensify, the impact with which they would land.

Narratively diverse but thematically intertwined, the anthology (beginning with “Mangrove” last month and continuing on Amazon with new releases through next week) shines a sociopolitical spotlight on London’s West Indian community from the mid-1960s to the ’80s. These are McQueen’s people: Born in 1969 to Caribbean parents who were among those invited to settle in Britain after World War II, he has woven his own memories and family stories into a vibrant tapestry of immigrant dignity and determination.

In the process, he forces a reckoning with the racism and systemic discrimination of the period that feels long overdue, one that pushes his characters to act in ways as varied as their circumstances. In “Education” (Dec. 18), set in the 1970s, a smart, stargazing 12-year-old named Kingsley (Kenyah Sandy) scores poorly on a culturally biased I.Q. test and is transferred to a so-called special school. Unaware of an infamous report that had designated West Indian children as educationally subnormal, Kingsley’s proud, hard-working mother (a very fine Sharlene Whyte), is initially reluctant to believe that her son is a victim of segregation.

Her discovery of a network of Saturday schools run by Black parents and teachers proves transformative, and McQueen, who attended one of these schools, uses this small, hopeful story to illustrate how one generation, by means of an ingenious workaround to bigotry, fought to secure the future of the next.

Also fighting, but in a very different way, is the title character of “Alex Wheatle” (Dec. 11), engagingly played as an adult by Sheyi Cole. A true story about the making of a writer and the dawning of a political consciousness, this gut punch of a movie follows the parentless Wheatle from a mostly white group home to a hostel in the South London district of Brixton and then to prison for his participation in the Brixton riot of April 1981. That multiracial uprising against myriad injustices churns through the center of a film in which violence and stillness alternate with queasy regularity.

More than once, we see Wheatle stunned and bound, a repeated victim of institutional abuse. He doesn’t fully understand his mistreatment: Unable to view himself as African — “I’m from Surrey!” he insists to an amused Black barber — Wheatle belongs nowhere. Anxious and asthmatic, he’s unable to relax around the rambunctious Jamaican family of his new friend, Dennis (Jonathan Jules), finding solace in reggae music. But not until he’s schooled in Black history by Simeon, a dreadlocked cellmate (a terrific Robbie Gee), do the scattered pieces of his identity begin to slide into place. Dennis might teach him how to dress and move, but it’s Simeon who teaches him how to be. 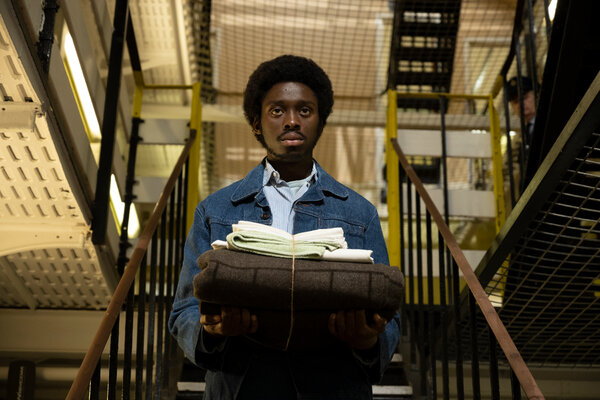 That the entirety of “Small Axe” feels profoundly personal is no surprise. That moments from its component parts leap from the screen with crackling recognition has perhaps less to do with the prominence of the Black Lives Matter movement than with the authenticity and heart of the filmmaking: the lived-in costumes and décor; the strutting energy and colors of Wheatle’s West Indian neighborhood. Again and again in these films, characters are sustained and comforted by music that enriches their stories without interrupting their flow. At the same time, the cinematographer Shabier Kirchner’s camera is as gracefully intuitive in motion as when simply standing still.

There’s a beautiful example of this in “Red, White and Blue” shot from the back seat of a parked car, as Leroy Logan (John Boyega) and his father (Steve Toussaint) leave the vehicle and say goodbye at the entrance to a police training facility. As Al Green’s version of “How Can You Mend a Broken Heart” plays softly, the scene’s complicated emotions illuminate a generational divide that’s one of the anthology’s most moving themes. The real Logan is a former superintendent in the Metropolitan Police, and “Red, White and Blue” dramatizes his decision to abandon a career in forensic science in the early 1980s and join the force after his father is viciously beaten by the police for a spurious parking violation.

Seeing the new job as a betrayal, his father is furious. He is pursuing a civil case against the police and still believes in individual rights that the system has no intention of granting. Logan, however, hopes to be a bridge to his Jamaican community, and is perhaps naïvely unprepared for the virulent racism he encounters from peers and superiors.

Passed over for promotions and denied backup in life-threatening situations, Logan nevertheless excels. Still, like Alex Wheatle, he struggles to find his place. Distrusted by the very community he hopes to serve, Logan epitomizes the tragic hero; yet Boyega never allows him to congeal into saintliness. Some of “Red, White and Blue” is hard to watch, but the film is eloquent on how an institution will resist change, perhaps especially from inside its own walls.

For most of “Small Axe,” men dominate the screen and the narrative, but “Lovers Rock” is all about the women. A magical mood piece set during a Notting Hill house party in 1980 and named for a romantic genre of reggae, the film celebrates the gatherings that Black people, unwelcome in white nightclubs, created for themselves. Shiny dresses with flutter sleeves compete with the men’s exuberantly patterned shirts, and white “church shoes” do double duty on a dance floor where the women wriggle and sway in pretend obliviousness to the men propping up the walls. The story is a mere wisp — a first-flush romance that spills over into morning — but the film’s sensuality and flares of pure joy lingered with me long after it was over.

As did its sounds and images: a thick strand of hair steaming from a hot iron; a kitchen singalong over a bubbling vat of goat curry; a rapturous, unscripted a cappella rendition of Janet Kay’s 1979 single, “Silly Games,” the women’s voices rising to meet the song’s ecstatic high note. There’s a euphoria here that the occasional intrusions of bigotry and sexual assault — outside the party and the sanctuary it provides — can’t dispel.

“This is my musical,” McQueen said in the press notes, and that music is divine. As one man after another silently claims a dance partner, Coral Messam’s tactile choreography gives us rolling hips and expressive hand gestures, the camera weaving and sliding among stomping feet and twisting torsos. Electric and alive as few films are, “Lovers Rock” will make you giddy with longing for a pleasure we’ve been too long denied: The singular rush of being one with a beat and a roomful of possibilities.

The “Small Axe” anthology isn’t rated. The films’ running times range from about one hour to a little over two hours. Watch on Amazon.