Home » ‘Spiral: From the Book of Saw’ Review: Slicing Up Bad Apples

‘Spiral: From the Book of Saw’ Review: Slicing Up Bad Apples

This addition to the “Saw” universe stars Chris Rock as a misanthropic detective pitted against a Jigsaw copycat. 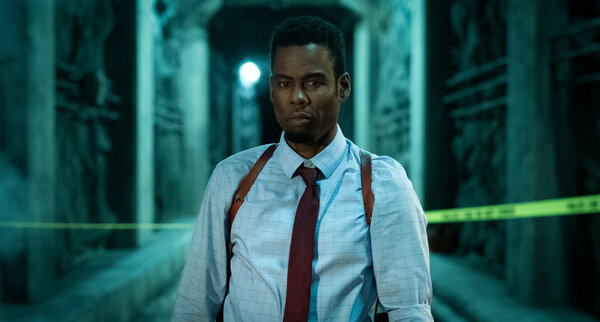 In “Spiral,” the latest film in the “Saw” universe, the first expletives land before the two-minute mark. Blood spills right after, when a man has to decide between getting his tongue ripped out or being hit by an underground train. That the film is overall gorier and more foulmouthed than its predecessors, while still managing an R rating, is undoubtedly an accomplishment. Unfortunately, that is the film’s only notable one.

“Spiral” is directed by Darren Lynn Bousman (“Saw II,” “Saw III” and “Saw IV”) and written by Josh Stolberg and Peter Goldfinger (“Jigsaw”). The film follows the lone wolf detective Zeke (Chris Rock), who begrudgingly accepts a new partner (Max Minghella) at the same time a Jigsaw copycat targets the corrupt officers on his force. Zeke is portrayed as a renegade, the rare American male unafraid to whine about political correctness or call his ex-wife misogynistic slurs. He scoffs at protocol, tortures an informant and prattles on about how women can’t be trusted. Yet the film calls Zeke a “good cop” and expects viewers to root for him against the killer.

Though “Spiral” is the first “Saw” film to introduce a new style of villain — the motivation, voice and puppet alias are all different from that of original baddie John Kramer — it is no more challenging than the rest. Its most redeemable moment is one of accidental camp, when a forensic specialist standing next to a fleshless corpse states, “He was obviously skinned.”

The premise is disingenuous at best and, in a moment where scores of citizens are calling for widespread police reform, fearmongering at worst. Like Jigsaw offering one of his facile riddles, this film is not as clever as it thinks it is.

Spiral: From the Book of Saw
Rated R for dismemberment, naughty words and general gnarliness. Running time: 1 hour 33 minutes. In theaters. Please consult the guidelines outlined by the Centers for Disease Control and Prevention before watching movies inside theaters.