This spinoff of “Spirit: Stallion of the Cimarron” is a bland, bubbly romp through the Wild West, with a heavy dose of girl power. 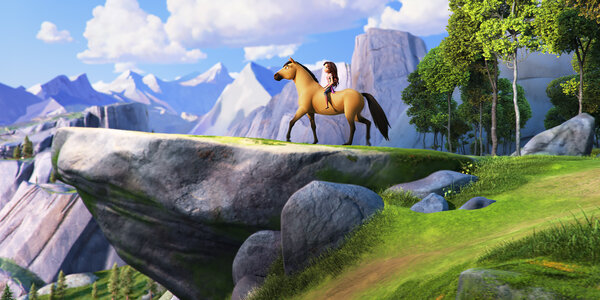 Nearly two decades after “Spirit: Stallion of the Cimarron” and its eponymous yellow mustang came on the scene, “Spirit Untamed” — a chirpy, digitally reupholstered spinoff — has arrived. While both are from DreamWorks Animation, the reboot has little in common with the 2002 original, which clung to hand-drawn visuals at a time when the pseudo-realistic computer animation of “Shrek,” also from DreamWorks, and Pixar movies like “Monsters, Inc.” began taking over. For better or worse, this new “Spirit” takes a modern approach.

Instead of a heavy-handed, power-ballad-filled melodrama about a bronco and his saintly Native American comrade, “Spirit Untamed” is innocuously geared toward young (horse) girls everywhere. It uses the racially diverse characters from the Netflix series “Spirit Riding Free,” which debuted in 2017 and reintroduced the franchise, to deliver a coming-of-age tale with a predictably heavy dose of girl power.

At the film’s center is the thrill-seeking Lucky Prescott (Isabela Merced), who is essentially banished from her stuffy East Coast abode and sent to spend the summer with her estranged father (Jake Gyllenhaal) in the frontier town of Miradero. Instantly drawn to a stallion she names Spirit, our American Girl-esque protagonist strives to earn the horse’s trust, simultaneously getting in touch with her Mexican roots and defying her dad, who remains scarred from her mother’s horse-riding-related death.

Thankfully, Lucky (who also goes by her real, Spanish name, Fortuna) is not a loner. When brutish wranglers horse-nap members of Spirit’s herd, our heroine is joined by her intrepid gal pals on a perilous obstacle course-like rescue mission through the outback.

The kiddies, I’m sure, will be satisfied. The film (directed by Elaine Bogan) is a bubbly, fast-paced romp through the Wild West, which is not to say it’s an improvement on the maudlin original. With its saucer-eyed, bobblehead-like characters, it’s a version barely distinguishable from the majority of animated children’s movies these days — more like Spirit domesticated.