Home » Movies » Sundance 2021 Guide: Bundle Up and Settle in on Your Sofa

Sundance 2021 Guide: Bundle Up and Settle in on Your Sofa Attending the Sundance Film Festival has never been an easy thing to do. Passes are pricey, accommodations are even pricier, the closest airport is nearly an hour away, and you end up waiting in long lines (in Utah, in January) for screenings — at least for the ones that haven’t sold out (which most do).

But like so many film festivals in the Covid era, Sundance has gone virtual this year. So while that means there’s no chance of randomly encountering celebrities in the bathroom (well, less of a chance), it does mean that anyone who can scrounge up $15 — the price of a single film ticket — can attend. You won’t even have to put on long johns and snow boots, unless your super is being especially stingy with the heat.

So … what to watch? Even pared down, as it is this year, the festival program is a bit overwhelming — 73 feature-length films and 50 short films — and it’s not like you can make your selections based on reviews or buzz, as most of these titles have never been seen before. But if you’re the kind of viewer who wants to attend a virtual Sundance, you’re probably the kind of viewer who has enjoyed films from previous festivals, so here are some recommendations from this year’s slate that recall the great films of Sundances past. Tickets and other details are at sundance.org. 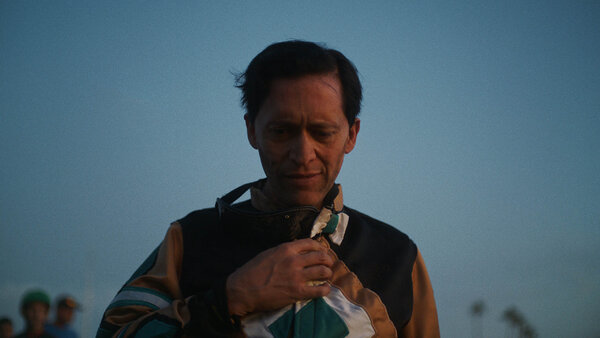 Chloé Zhao’s powerful, earnest drama “The Rider” (which played in the Spotlight section of the 2018 fest) concerns a rodeo rider who finds himself sidelined from the work he loves, and uncertain where his life will go next. In Clint Bentley’s “Jockey” (playing in this year’s U.S. Dramatic Competition), the versatile character actor Clifton Collins Jr. (“Capote”) stars as a racing jockey facing a similar dilemma: As he makes one last run at a championship, the appearance of a young jockey who claims to be his son forces the aging athlete to contemplate who he’ll be when he’s not on a horse.

Luca Guadagnino’s adaptation of André Aciman’s novel was one of the highlights of Sundance 2017, and for good reason: the beauty of its luminous Italian vistas was matched only by the tenderness of its dramatization of first love (and loss). The first-time feature filmmaker Marion Hill’s “Ma Belle, My Beauty” (in this year’s Next section) plays in a similar key, mixing gorgeous European locations — this time, the dazzling vistas of the South of France — with a story of sophisticated romantic entanglements, as a newlywed couple welcomes the woman they both once loved back into their home for a surprise visit.

If you liked ‘Donnie Darko,’ try ‘We’re All Going to the World’s Fair.’

Audiences at the 2001 Sundance Film Festival knew they were seeing something special in “Donnie Darko,” Richard Kelly’s mind-bending deep dive into time travel, wormholes, doomsdays and suburban ennui. It’s so strange and distinctive that it’s all but incomparable, but those unnerving vibes are also present in the debut writer-director Jane Schoenbrun’s Next selection, “We’re All Going to the World’s Fair.” Focusing on a lonely teenage girl’s journey into a mind-altering online role-playing horror game, it’s another emotionally resonant tale of teenage identity, with generous helpings of horror and science fiction mixed in.

If you liked ‘Won’t You Be My Neighbor?,’ try ‘Street Gang: How We Got to Sesame Street.’

One of the breakout titles of Sundance 2018, Morgan Neville’s “Won’t You Be My Neighbor?” was a poignant and heart-rending documentary about the life and legacy of the children’s public television favorite Fred Rogers. Marilyn Agrelo’s adaptation of Michael Davis’s book mines similar historical and emotional territory, detailing how educators and entertainers joined forces in the late 1960s to put new ideas about teaching and learning — and a new focus on inner-city children — into practice on “Sesame Street.” And like “Neighborhood,” “Street Gang” is loaded with enough archival clips and songs to stir nostalgia in the heart of even the most resistant viewer.

If you liked ‘Blindspotting,’ try ‘On the Count of Three.’

Carlos López Estrada’s comedy-drama was one of the opening-night films of Sundance 2018, and one of its most memorable — a pulsing, rousing story of two lifelong best friends dealing with changes in their lives and the world around them. That film was grounded by the relationship between its protagonists (played by co-writers Rafael Casal and Daveed Diggs). A kindred relationship, with even higher stakes, is at the center of “On the Count of Three,” in which the actor and comedian Jerrod Carmichael (making his feature directorial debut) and Christopher Abbott are best friends bonded by a suicide pact.

If you liked ‘Hoop Dreams,’ try ‘Captains of Zaatari.’

One of the most acclaimed documentaries in Sundance history — and in the history of nonfiction cinema — is the 1994 sports epic “Hoop Dreams,” following two high school basketball players through a four-year cycle of hopes and disappointments. The first-time director Ali El Arabi also profiles two young sports fanatics: Fawzi and Mahmoud, best friends obsessed with soccer but trapped in a Jordanian camp for Syrian refugees. And like the subjects of “Hoop Dreams,” Fawzi and Mahmoud see their sport not just as a hobby, but as a pathway out of their grim surroundings and into a better, brighter future.

Love it or hate it, no one who saw the 2016 U.S. Dramatic competition award-winner “Swiss Army Man” forgot its story of a forgotten man on a desert island who befriends a farting corpse. That same spirit of gonzo, anything-goes storytelling is in abundance in Dash Shaw’s animation-for-adults feature, which centers on a secret zoo holding rare and imaginary beasts (like the unicorn and the baku), and the humans who are drawn into its orbit.

The trials and tribulations of the typical high school student’s senior year were transformed into compelling drama in Nanette Burstein’s 2008 Sundance documentary “American Teen,” which focused on five students in small-town Indiana. The director Peter Nicks (who also made the Sundance 2017 award-winner “The Force”) captures a much more tumultuous time in his documentary “Homeroom,” which follows Oakland High School’s class of 2020 through a senior year shaken up by calls for the elimination of the district’s police force, and then overturned by the pandemic.

One of Sundance’s most noteworthy fictional high school films was Rian Johnson’s 2005 Special Jury Prize winner “Brick,” which viewed the types and tropes of the secondary school narrative through the lens of classic film noir. Manuel Crosby and Darren Knapp’s “First Date” is also something of a throwback, crossing the classic high school dating comedy with ’80s-influenced action and “Repo Man”-esque surrealism, a playful genre mash-up with a beating heart underneath.

If you liked ‘Stranger Than Paradise,’ try ‘El Planeta.’

Jim Jarmusch’s deadpan comedy “Stranger Than Paradise” was an early indie hit, and thus one of the first big breakouts from Sundance (where it won the Special Jury Prize in 1985). It remains among the most influential independent films of all time, so it’s not surprising to hear its echoes in the artist Amalia Ulman’s feature directorial debut, “El Planeta,” another black-and-white, absurdist comedy about survival. But it also goes in its own wonderfully personal direction, with Ulman not only writing and directing but also starring as a desperate student running small-time grifts with her mother (played by Ulman’s own mother, Ale Ulman).