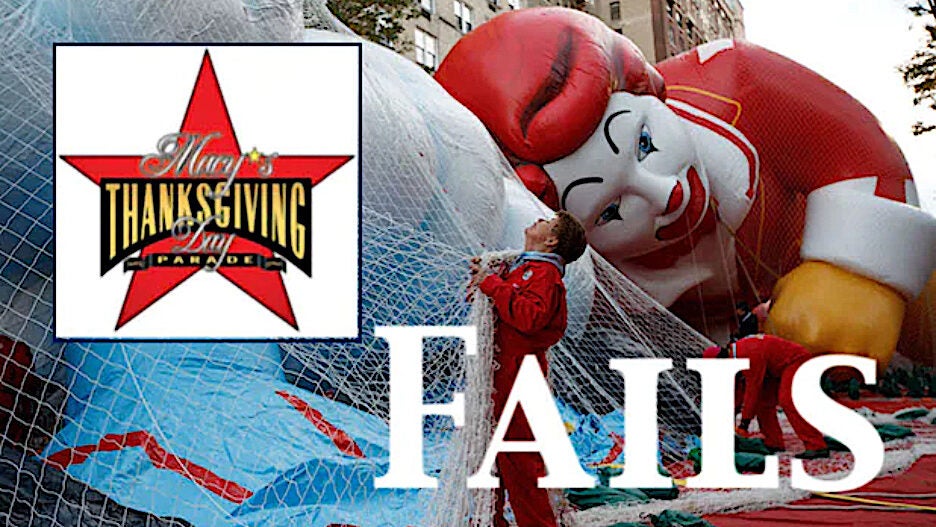 Turkey Day is here, which means that all across America, La-Z-Boys have been dragged in front of TVs because the annual viewing of the Macy’s Thanksgiving Day Parade is upon us. One way to get hyped for this year’s festivities is to remember some of the most epic fails of years past. From the infamous Uncle Sam and Spider-Man incident of 2012 to the numerous bystanders injured when balloons collided with street lamps, here are some of the most unforgettable — and uncomfortable — moments in the parade’s history.

Cat in the Hat Balloon Victim Seuss Sues Macy’s  •  In 1997, the “Cat in the Hat” balloon hit and broke a lamp post. A rogue piece of the metal fixture flew and hit a woman in the head, fracturing her skull, the New York Post reported at the time. She spent a month in a coma and later sued Macy’s for $395 million in damages.

Popeye Wets on the Crowd  •  In 1957, Popeye the Sailor Man’s hat collected so much rainwater that it filled up and, well, it had to go somewhere… so, as the balloon swayed in the wind, it dumped the water onto unsuspecting parade-goers beneath it.

Spider-Man and Uncle Sam Get Naughty  •  Awkward! Who could forget this hilariously awkward and NSFC mishap from 2012? The night before the parade — that’s when they inflate the balloons and get them ready for the next day’s festivities — these two balloon pals shimmied together somehow, and Spider-Man’s face accidentally got up close and personal with Uncle Sam’s butt. It wasn’t what it looked like — but it did look like that.

Kermit the Frog Croaks  •  The Muppet was right – it’s NOT easy being green. ” Hovering six stories high and 24-feet wide at his best, in 1985, the Kermit balloon suffered a rip in his belly region and began to deflate, causing him to sink dangerously down to the ground — and the people holding onto his strings.

Superman Found His Kryptonite  •  Apparently the Man of Steel isn’t made of steel after all. Also in 1985, a down-draft pushed Superman into the ground. His handlers tried to control him but he collided with a tree, ripping his leg open. The following year, wind got the best of him again, pushing him into a tree. One of the balloon’s arms ripped off, causing the remainder of the severed appendage to dangle loosely, its frayed edges blowing in the wind.

Sonic the Hedgehog Clocks Off-Duty Cop  •  According to the New York Times, in 1993, a gust of wind sent the Sonic the Hedgehog balloon off course and into a tree, damaging his arm and spike, leaving it dangling. As it continued down Central Park West, it rammed a lamp post. A piece of the light fell and landed on off-duty Suffolk County police captain, Joseph D. Kistinger, breaking his shoulder.

Rex the Dinosaur Blows His Nose  •  In 1993, Rex the Dinosaur’s nose caught a traffic light and ripped wide open. In case you were wondering, no, this is not Rex the Dinosaur from “Toy Story” — he didn’t make his Macy’s parade debut for another two years. This Rex, who is reddish-orange color rather, is from the 1993 animated film “We’re Back! A Dinosaur’s Story.”

Barney’s Belly Ache  •  Kids that lined the streets during the 1994 parade cheered wildly as their favorite purple dinosaur glided down the street. And then it got windy. His “walkers” struggled to control him as he blew from side to side and over the crowd. Finally, he struck a lamppost, tearing a massive hole in his belly, and he very quickly deflated and crashed to the ground.

M&Ms Proven Bad for Kids  •  In 2005, wind yet again played havoc with the balloon on the parade route, this time causing the inflatable it float dangerously lower above the crowd. As it made its way through Times Square, one of the handler lines snagged a lamppost, causing it to spiral out of control and hit a street light. Parts of the broken light fell, hitting and injuring two sisters, one of whom required stitches to the back of her head.

SpongeBob Gets Poked  •  In 2006, lamp posts once again had the last laugh when one came face-to-face with Nickelodeon’s beloved under-sea dweller, SpongeBob. Though he is porous in theory, his balloon-form is sadly not immune to being punctured.

Cat-tasrophe  •  A giant black cat made its debut in the very early days of the Macy’s Thanksgiving Day Parade, when the balloons were released and set free at the end of the route to deflate on their own and then, hopefully, land somewhere without creating and damage or injury. But this cat hit power lines and burst into flames

Flying Cheetah Takes Out Plane  •  In the late ’20s, Macy’s offered a $100 reward for the return of balloons they had let fly off at the end of the parades. In 1932, a cheetah balloon hooked onto a plane attempting to recover it, causing the plane to tailspin. The accident resulted in Macy’s ending their “let it go” policy.

Dudley the Dragon Is Slain •  The winged serpentine creature’s 1995 maiden voyage in the Macy’s parade, well, it didn’t go so well. Within moments of making his way down the route, a heavy gust of wind slammed him into a lamppost, showering the crowd below it with broken glass. As he was slowly deflating, he was removed from the parade and never made it back in the years that followed.

Nutcracker Cracks a Handler  •  This inflatable nutcracker was less in the mood for marching and more interested in taking a nap on Central Park West in 2019. Actually, it was again the wind that got the best of yet another balloon. As the handlers were attempting to stabilize it blowing in the wind, it sort of lurched forward, smacking a woman hard and throwing her to the ground.

Donald Duck Was a Pain in the Neck  •  Although he looked nothing like the Donald Duck we all know and love – he donned what looked like a chef’s hat and his beak was extra long – the beloved Disney character made his Macy’s debut in 1935. His long, skinny neck whipped wildly in the wind, causing rain the water that collected on his hat to dump all over the parade watchers. Poor guy wasn’t invited back the following year.

Ronald McDonald Wasn’t Clowning Around  •  Nothing can ever wipe that smile off Ronald McDonald’s face. During the 2019 parade, the cheerful clown ran into a problem at one of the staging areas when his foot was ripped open when it collided with a tree. But as it made its way down the route, what began as a small, three-inch gash grew as the wind batted it around. A couple of Macy’s employees noticed the rip during a last-minute check, but had to let it pass because they couldn’t find tape to patch it. The entire leg eventually deflated and Ronald was pulled from the march.