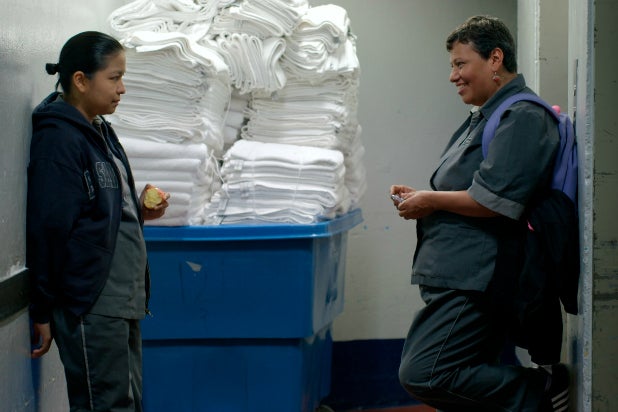 Knocking on doors expecting no one to answer is a daily routine for housekeeping staff at hotels local and remote. Their intense physical labor is unseen and taken for granted, almost as if magically performed outside the vision of its beneficiaries, earns them no glory. Unnoticed, they proceed to the next empty scene in disarray. More than merely dignifying their toil, Lila Avilés’ marvelously honest first feature “The Chambermaid” subtly counteracts such dehumanization.

For her sympathetically achieved big-screen debut, Avilés — who honed her skills as a theater director prior to jumping into the film arena — forged an observational character study on 24-year-old chambermaid Eve, short for Evelia (Gabriela Cartol, “I Dream in Another Language”), employed at a lavish Mexico City hotel catering mostly to affluent international visitors.

Of few words but purposefully active in shaping her future, Eve channels internalized resilience to persevere under grueling conditions. Above-average dedication shines through her impeccable cleaning prowess room after room. Focused on her aspirations to receive a coveted promotion to a luxurious floor, Eve plays by the rules to prosper and expects her efforts to be recompensed. Measured in its pacing but never stagnant, “The Chambermaid” quietly fleshes out Eve’s subconscious with actions rather than words.

Already comfortable and competent in the medium, Avilés shows cinematic confidence by limiting dialogue to bare essentials for humor and to transcend the film’s sole location. Even though the camera never physically leaves her workplace, there’s a life for Eve beyond its walls, which the director extraordinarily and casually infiltrates via longing phone calls between completed tasks.

From these brief chats, we can infer Eve’s home is distant, as it is for many Mexicans who work in the capital but live in the outskirts, and she must start her commute in the darkness before the crack of dawn. Her late arrival and early departure don’t allow for much interaction with her four-year-old son, who likely knows his mother’s voice better than her face. Over the phone, Eve checks in with Maguitos, whose voice we never hear, her child’s trustworthy caretaker. A testament to the efficacy and narrative precision of Avilés’ writing, these details are organically conveyed.

Pervasive and evident as economic inequality is in the day-to-day of Eve and her coworkers, there are no signs of pity on the writer-director’s behalf. Contrarily, their routines are empowered with transient instances of juvenile joy, potential friendships, and even explicit sexual desires all situated within the constraints and liberties their jobs allow. At first, a recluse closed off to human interaction outside of professional matters, Eve gives in to camaraderie upon joining an adult class imparted within the hotel’s bowels to help workers attain an equivalent to a GED — another example of her pursuit of self-improvement.

Miriam, also known as Minitoy (bona fide scene-stealer Teresa Sánchez), a fellow housekeeper whose nonchalant past may have included a stint working in the United States, positions herself as Eve’s ally, chipping away at her mistrust with supportive gestures. Sánchez’s Minitoy infuses Eve’s steadily solemn shifts with jubilant presence while simultaneously illustrating an opposite approach to getting ahead: minimal effort elevated by a big personality.

Present in every luminous frame from DP Carlos Rossini, Cartol manifests Eve’s curiosity in contemplative stares and faint smiles. Although not vocally inquisitive about the affairs of others, it’s understood that her earnest interest in the guests’ odd requests and lifestyles lacks judgment.

Eve emanates equanimity in her every mannerism, from the way she tucks away little secrets in her uniform’s pockets to how she admires the views of the city from windows off-limits to her. Cartol’s performance thrives with such sturdy inner strength that even when injustice strikes, Eve’s anger is muffled, only unleashed when tucked away among a pile of linens — a moment enhanced by Rossini’s cinematography, which recurrently harnesses tight spaces for an intensified effect of imprisonment.

Marked by magnificent restraint and naturalistic humanity, Cartol’s construction of Eve is the work of an acting giant given the chance to leisurely develop real life from the page. The Mexican actress does much more than honor a thankless position; she bears the weight of an entire production where her ability to communicate unvarnished emotions without overdramatizing is the story’s foundation. Cartol is unaffectedly magnetic.

In Eve’s reality, the only constant is abandonment, a saddening fact exemplified both through her own offsite maternity and in the way people come in and out of her life without a proper farewell, be it an encouraging teacher dismissed without warning or an Argentine mother and her infant child, who required her assistance before disappearing. With each disappointment, Eve’s emotional attachment to ephemeral encounters wears down, until a final blow upends her dutiful outlook.

Over the course of “The Chambermaid,” a fancy red dress in the establishment’s lost-and-found bin symbolizes the promise of one day, through hard work, having access to everything that’s been unreachable. Eve is told her good behavior and diligence have put her at the front of the line to get it, but by the time the chance of wearing the elegant garment becomes feasible, she is not the same person who once could have been satisfied with the illusion of upward mobility.

When Eve decides she no longer wants to be a serviceable fixture, the model chambermaid considers the possibility of knocking elsewhere, where doors might actually open.