The Class Clowns of ‘Booksmart’: Beanie Feldstein and Kaitlyn Dever

Hollywood has generated no shortage of memorable male duos to lead its coming-of-age comedies — Ferris and Cameron; Wayne and Garth; Beavis and Butt-head — while failing to keep pace with female-fronted movies. That’s an error that “Booksmart” hopes to correct: this film, which opened Friday, stars Beanie Feldstein and Kaitlyn Dever as academically accomplished best friends, Molly and Amy, who hope to transcend their studious reputations one night as they hop from the rich kids’ boat party to the drama kids’ murder-mystery dinner to the cool kids’ blowout.

“Booksmart,” which is the directorial debut of Olivia Wilde, is also a breakthrough for Dever, who had supporting roles in “Short Term 12” and “Beautiful Boy,” and for Feldstein, who has appeared in “Lady Bird” and Broadway’s “Hello, Dolly!” (Feldstein is also the sister of the “Superbad” star Jonah Hill, no stranger to movies about leaving adolescence behind.)

[Read our review of “Booksmart.”]

BEANIE FELDSTEIN I went to Harvard-Westlake [a private school in the San Fernando Valley]. So the school that we depict in “Booksmart” looks a lot like my high school. It’s a really intense place with a lot of high-achieving people. Although, if I was in that school, I would have been first in line at the murder-mystery party, ready to play my character.

KAITLYN DEVER I was on a sitcom [“Last Man Standing”] from like 13 to 18, so I was in an independent studies program. Basically, it was like going to school for three days a week instead of five. But I had all the rites of passage. Still did the whole winter formal, prom, beach, the graduation, that whole thing. I fully tripped bad at prom. I fell down the stairs. It was not fun.

DEVER I was being dumb and I skipped four steps, fell onto my date at the end of the night. I’m like, Really? 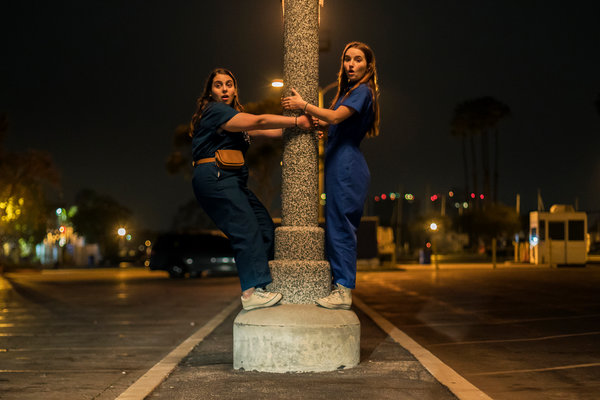 Were previous high school movies an important part of your adolescence?

FELDSTEIN “Mean Girls” was the most quoted at my high school. “Superstar,” with Molly Shannon, is so vibrant in my memory. I watched it at a sleepover for the first time. Someone messaged us on Instagram, saying they wanted “Booksmart” to be their new sleepover movie, and I started tearing up.

“Booksmart” took a long time to come to fruition. Kaitlyn, you were attached to the project for about three years. Why was it so important to both of you?

DEVER It’s not often for women — and especially, for young women — that we’re given the opportunity to lead a film and be genuinely funny.

FELDSTEIN It’s not humor about taking another person down. It’s humor about building each other up. And that’s our kind of humor in real life. I literally walked in today — I was like, “That eyeliner — I can’t.” That’s just who we are.

DEVER I remember watching movies where girls felt the need to change themselves in order to be quote-unquote popular or to be liked by their crush, or to become a princess. Whatever. That is not these girls. They don’t feel the need to ever curl their hair for the party or put on a tight dress.

FELDSTEIN They dress down.

DEVER Honestly, I loved my Rosie the Riveter-inspired jumpsuits. Those are really just iconic.

FELDSTEIN And comfortable. They’re practical. They have a lot of pockets. This is what these girls would be thinking about.

Had you met each other before “Booksmart”?

DEVER We were always ships in the night.

FELDSTEIN I saw Kaitlyn at the Toronto Film Festival. She was in pink, and she walked out, and I was like, [gasps]. “Wait — oh — but ——. ” When Olivia told me she wanted me to be Molly, I was like, is Kaitlyn still playing Amy? I couldn’t believe it. Because Kaitlyn’s performance in “Short Term 12” will go down —

FELDSTEIN — as one of the best cinematic performances —

DEVER She brings this up all the time.

FELDSTEIN — of all time. I was such a fan of hers.

DEVER We met for the first time at a lunch with Olivia, at the Chateau [Marmont] in Los Angeles, as you do. And we agreed to living together within the first 15 minutes of knowing each other.

Did that feel abrupt?

FELDSTEIN We each had come to the table with an intense love and passion and belief in these characters. We wanted to do everything we could to make them fly. Once Liv was like, maybe you should live together, it was like, boom — that’s it.

DEVER We were already thinking it.

DEVER We really did. Very, very scheduled and organized.

Was there ever a time during the filmmaking process where you had a disagreement or needed space apart from each other?

DEVER No. I mean, I had an occasional bath.

FELDSTEIN She loves a bath. The only thing we differ on is temperature.

FELDSTEIN She loves a hot bath and I want to be ice cold. My room ran like 10 degrees, 15 degrees warmer than her room. So she’s frigid, I’m burning. That’s the only thing I can think of.

Did you turn to each other for support when you knew you had intense scenes coming up?

FELDSTEIN Constantly, but not because like, oh, this is going to be a hard day. It was more like, thank God you’re here — I’m so scared.

DEVER One of the bigger days was the fight [between Molly and Amy]. It was the one scene we hadn’t read through together.

FELDSTEIN I’m laughing because I had my mom run lines with me, and I wish I’d recorded it. She was like [Jewish mom voice], “Molly. You’re being. A bad friend!” [laughter] “I’m not going for a summah — I’m going. For the whole year!” All the emphasis in the wrong places.

DEVER And we weren’t sure how many times we were going to be able to do it. Olivia had said we’ll try to do it in one shot, but if you can’t that’s totally fine. We’re like, no. [Claps hands] We’re doing what you want.

[Read our profile of Olivia Wilde.]

DEVER We had each other’s back. Even if we were to step on a line, or someone said something wrong, we knew we were going to be there to save each other.

Was it hard to part ways when “Booksmart” ended?

DEVER It was quite the whirlwind for both of us, because we had just experienced one of the best summers of our lives. And then you fled to Europe.

FELDSTEIN I went to London to do this film called “How to Build a Girl.” Like “Booksmart,” I’m in every scene. But Kaitlyn wasn’t there. It was so intimidating, but I felt like I had learned so much from you that I took into that experience.

DEVER This was like our warm-up movie. We both led a film together, for the very first time, and then right after “Booksmart,” we went off and separately led two different projects. [Dever went onto the Netflix limited series “Unbelievable.”] It’s kind of crazy to think about.

FELDSTEIN We still talk a lot. We love an in-bed FaceTime. When you live with someone, that’s the natural state of being.

What’s something surprising that you each learned about the other person in this process?

DEVER The most shocking thing about Beanie was that she loves country music. I would have never thought that. You’re from L.A., you love the theater —

DEVER I know. That’s what I love about country songs! Which is why I was like, wow, this is great. I made her a playlist.

FELDSTEIN I always think Kaitlyn’s the best big sister. She’s younger than me, but if she could be my big sister, that would be the best.