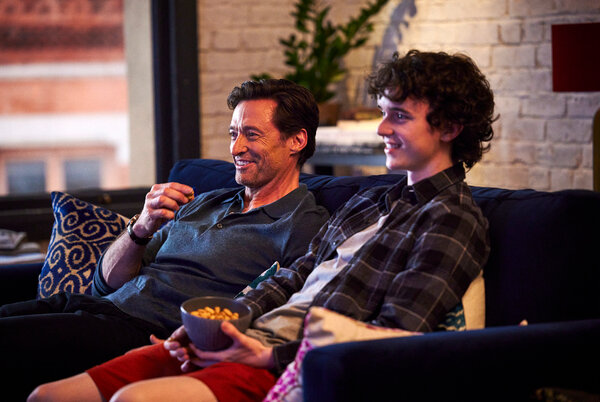 At one point in “The Son,” directed by Florian Zeller and based on his play of the same name, a clinician briefs a divorced mother and father on their teenage son’s condition after a mental health emergency. “He’s in very good hands now,” the doctor says, referring to the hospital staff. “Now” is the key word; the implication is that the wealthy, well-meaning Peter (Hugh Jackman) and Kate (Laura Dern) are unfit to handle the issues their son Nicholas (Zen McGrath) is facing.

In my professional opinion (I’m a critic, not a physician), the same should be said of the movie surrounding Nicholas, which tackles adolescent depression about as deftly as an estate lawyer performing open-heart surgery. Despite its contemporary New York City setting, “The Son” seems to have appropriated a midcentury understanding of mental illness, and the emotion on display feels even more artificial than the rooftop vista erected outside the windows of Peter’s industrial-chic Manhattan loft.

Peter shares this apartment with his wife, Beth (Vanessa Kirby), and their infant son, and though his work as an attorney is consuming, he relishes his downtown idyll. But the sweetness curdles when Peter learns that Nicholas, who lives with Kate in Brooklyn, has been acting volatile and would prefer to move in with him. Never mind that the teenager is friendless, cutting class and has taken to self-harm; Kate and Peter agree that a change of scenery will restore the cheerful child they raised. (We eventually meet a 6-year-old Nicholas in flashbacks that are so euphoric they could double as airline commercials.)

The leadenness of “The Son” is puzzling given the ingenuity of Zeller’s “The Father,” which positions the audience within the point of view of an aging man with dementia. (The film won two Oscars in 2021.) Unlike that triumph of subjectivity, “The Son” declines to probe the perspectives of Peter or Nicholas, compelling the audience to survey the wreckage of their relationship from a distance. It also leaves the actors seeming somewhat stranded, trading clunky lines or lurching into tantrums without the psychological depth to underpin their affliction. The movie may take place inside a pit of despair, but the theatrics leave us with the uncanny sensation of feeling nothing at all.