Tom Hanks on the Pleasures and Perils of Voicing Woody

In 1995, Tom Hanks lent his voice to Woody, the trusty sheriff doll in Pixar’s “Toy Story.” Since then, Hanks has become a grandparent, while the films have evolved into a soulful meditation on growing up and the passage of time. “Toy Story 4,” out Friday, finds Woody moving on yet again, with what feels — for now, at least — like a conclusive ending.

Here, Hanks talks about the franchise and what it says about family, and the unique pleasures and demands of playing a children’s plaything. These are edited excerpts from the conversation.

Has the process of recording Woody changed much?

He still yells an awful lot. (Shouting) “Guys come on! We have to go! We just can’t leave her there, guys! Come on!” He is in some ways the compass of responsibility for everybody in the room. And he’s always been tightly wound.

There are times when my diaphragm is sore at the end of a four- or five-hour recording session, just because the challenge is to wring out every possible option for every piece of dialogue. It’s every incarnation of outrage and surprise and disappointment and heartache and panic and being plused and nonplused.

Fortunately, because I don’t smoke or get too drunk, my voice sounds more or less the same.

How does seeing Woody out in the world compare to seeing your own face on a movie poster?

We were at Disneyland with the kids. You know they’re always having parades and things like that, and there was a thing, an absolute extravaganza, and Woody is a part of it. We were there watching it and my daughter — who’s in her 30s, by the way — the first time we saw it, she burst into tears.

And I said, “It was kind of great, wasn’t it?” But she pointed out to me that Woody will be part of that for the rest of time, the same way Mickey is. And in no small way, I am Woody.

Have you developed a special fondness for the “Toy Story” films?

Believe it or not, I actually think they’re important. It’s a disparate group of toys, but there is this sense of both true family and extended family that is representative of anybody’s life, including the little kids, who just might be delighted by toys that come to life.

This one’s about moving on, you know. The pairing up and the moving on that must happen in life. Because we are forever being changed.

So much of the films are about family. How does that resonate with you as a parent?

These are just such magnificent motion pictures for that very reason. There’s the moment [in “Toy Story 3”] where Andy’s mom is in Andy’s empty bedroom and this thing comes over her. The mom mourning the fact that her boy was grown up and was no longer her little boy. I’m not even in that scene and I was knocked out by it. You think, how could they possibly animate this and have it be so, so profoundly right?

This is the same movie that has all of the toys thinking they’re about to meet their end in a fiery inferno. And what do they do, but reach out for each other. That’s really high-country stuff there. You can’t even call that a cartoon. That was a deep encapsulation of real authentic human feeling. 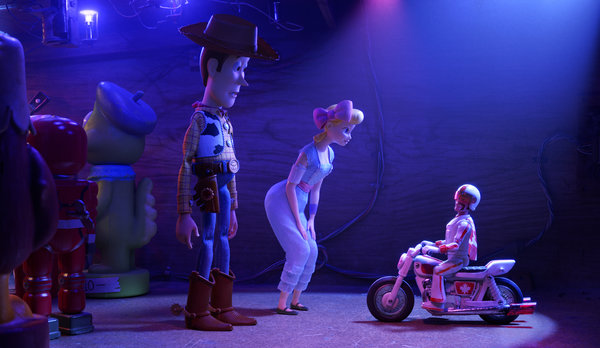 How do you tackle emotional scenes when you’re on the soundstage with the script?

It’s an imaginary stretch. To the point of exhaustion. Because you’re only using your voice, you can’t go off mic, you cannot use any of your physicality. You have to imagine that physicality. In a lot of ways that’s the antithesis of what you do as an actor.

I found a lot of times the only way I could do it would be closing my eyes. Not seeing the stage and the people there, and trying to work myself to a place. My last few sessions I had them set up the mic stand with my back to them. I don’t think I could’ve done the last few recording sessions the other way. If there was a scintilla of self-consciousness to any of those lines, it would have been unsatisfying.

I understand Tim Allen warned you about those last scenes.

As we were getting closer to what I knew were going to be the last few recording sessions, Tim sent me a text, saying: (gruffly) “Have you done these last pages yet? I’m still getting over it.”

It’s been such a long journey with these characters.

They are four completely different films. There’s no formula to them. And they don’t crank these things out. It takes them a while to see the possibility and to work up these stories that are going to be worthwhile. I think they would all probably go throw themselves off the San Francisco–Oakland Bay Bridge if they had made a “Toy Story” movie and everybody said it was just O.K. That just won’t fly. And I think that might be one of the reasons they’re saying, well, after “Toy Story 4,” we don’t know what the future of this is going to be.

I remember the first time I met Woody. They wanted me to come over because they were going to try this new form of animation. And there was Woody and the whole bit. I watched this test probably six times in a row and just thought, how did they do that? Not how did they make the image, but how did they make it spark to life so seamlessly?

And the grandchildren? Do they enjoy “Toy Story”?

They’ve seen them all many times. It is the perfect babysitter.

What’s interesting is, I think because they hear their grandfather’s voice and they know that I’m Woody, I guess the disbelief is not quite as suspended as, for example, for “Frozen.” That was all encompassing. They’re girls.