This is supposedly the definitive version of Francis Ford Coppola's Vietnam War epic, loosely based on Joseph Conrad's Heart of Darkness, with Martin Sheen as a special agent sent to recover the demented Colonel Kurtz (Marlon Brando). Though never as profound as it wants to be, it's still a riveting spectacle. Digitally projected. Astor, Sat 7.30pm, Sun 2pm and 7pm.

Much loved in its homeland, Zdenek Podskalsky’s 1969 comedy sees three working-class heroes (Jiri Sovak, Vlastimil Brodsky and Jan Libicek) trying their luck in the big city — Prague — where they masquerade as intellectuals in order to pick up girls. Screens as part of the Czech and Slovak Film Festival. Digitally projected. Capitol, Sun 22 Sep, 4pm. 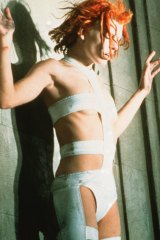 Milla Jovovich in The Fifth Element.Credit:Columbia/Tri-Star

Luc Besson's talents are basically those of a cartoonist, and silliness runs rampant throughout his 1997 futuristic fantasy in which Bruce Willis drives a flying cab, Gary Oldman jabbers in a Southern accent and a young Milla Jovovich is perfectly cast as the Supreme Being. Jean Paul Gaultier's costumes add to the zany Euro-disco vibe. Screens as part of the Spacetember festival. Digitally projected. IMAX Melbourne, Sun Sep 22, 5.45pm.

Set in Dublin, the second feature from Australian director Sophie Hyde is a major step forward from her debut 52 Tuesdays — a likeably acted comedy-drama about the belated coming-of-age of a couple of 30-something party animals (Alia Shawkat and Holliday Granger) that occasionally suggests a chick-flick answer to Withnail and I. Selected.

Sylvester Stallone stares into the void yet again in this grimly bizarre but undeniably personal coda to the Rambo saga, which finds the shell-shocked anti-hero well advanced in age but still capable of taking out scores of Mexican gangsters. The director is Adrian Grunberg (Get the Gringo) but the ultra-violent action has the authentic Stallone touch. General.