Some sports movies build to inspirational speeches; this one treats platitudes as the main event. 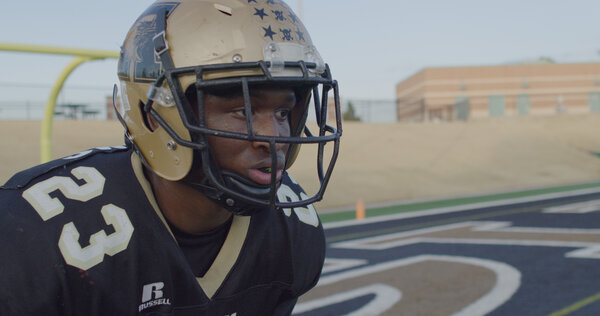 A clunky high school football movie inspired by the 2009 season of the Abilene Eagles (of Abilene, Texas), “Under the Stadium Lights” appears aimed at audiences who already know the outcome, the rivalries and the highlights. Occasional clips of the original games are presented with so little context they seem designed to jog memories rather than advance the drama.

Some sports movies build to inspirational speeches; “Under the Stadium Lights” treats platitudes as the main event. The character of Chad Mitchell (Milo Gibson, a son of Mel), a police officer and the team’s chaplain — and off camera, a producer on the movie and an author of the book it’s based on — invites the players to “talk about the stuff that” they “can’t talk about at home,” a device that ensures a steady stream of outpourings for the director, Todd Randall, to cut to.

A few characters get enough screen time to register, like Ronnell Sims (Carter Redwood), the quarterback, and his cousin Herschel Sims (Acoryé White), a running back, who both have parents who aren’t always there. Augustine Barrientes (Germain Arroyo), a linebacker known as Boo, resists joining a gang, while the selfless Chad learns to make time for his family. Despite prominent billing, Laurence Fishburne has only a peripheral role as a barbecue joint proprietor who watches the climactic game from a hospital bed.

The hokiest lines go to Coach Warren (Glenn Morshower), who, seizing a metaphor, tells Chad why he thinks that trucks have bigger windshields than rearview mirrors: to keep people focused on the present and not the past. “If we keep our thoughts in the windshield of life,” he says, “we’re going to do just fine.”

Under the Stadium Lights
Rated PG-13. Talk of drug dealing and drug use. Running time: 1 hour 49 minutes. In theaters and available to rent or buy on Apple TV, Google Play and other streaming platforms and pay TV operators.