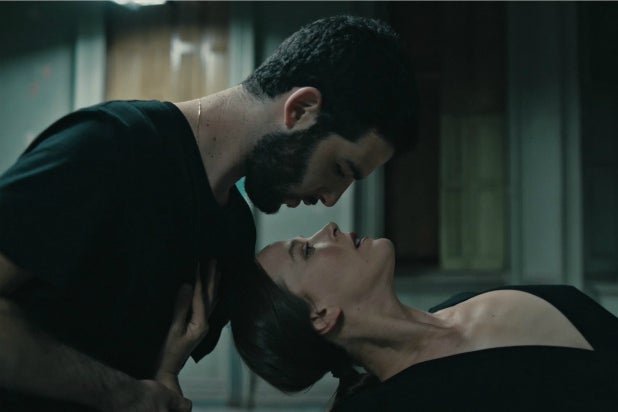 The critically-acclaimed “Aviva” (Outsider/Strand) casts both male and female dancers as both of the romantic leads, throwing out conventions of gender and sexuality in a love story that features some gorgeous choreography. Boaz Yakin’s film was programmed at the 2020 SXSW festival, and the Blu-ray features behind-the-scenes footage of dance rehearsals.

Melina León’s Cannes fave “Song Without a Name” (Film Movement), about an indigenous woman trying to track down the baby that was snatched away from her right after childbirth, is this year’s Oscar submission from Peru, and it’s a gut-punching tale of governmental corruption and personal loss.

Also available: Bag-of-cash thriller “Beasts Clawing at Straws” (Artsploitation Films) marks an impressive debut for filmmaker Kim Yong-hoon; based on a true story, the drama “Habermann” (Corinth Films) explores the tense relationship between Germans and Czechs before, during, and after WWII; “My Prince Edward” (Cheng Cheng Films) dissects the pressure to marry in contemporary Hong Kong, and one woman’s efforts to break free, even as she runs a popular discount-wedding-items boutique; real-life couple Charlotte Gainsbourg and Yvan Attal star in the comedy “My Dog Stupid” (Icarus Films), about a blocked middle-aged writer whose life changes when he takes in an obnoxious stray.

Two families flee to Argentina after WWII for very different reasons in the romance “My German Friend” (Corinth Films); 90-year-old Holocaust survivor “Frau Stern” (Omnibus Entertainment) has decided she is ready to die in this award-winning dark comedy; biopic “Louis Van Beethoven” (Film Movement) is a sumptuous retelling of the life of the legendary composer; an Austrian refugee tries to figure out “Where I Belong” (Corinth Films) as she tends to her ailing father in 1950s England.

“Audrey” (Bohemia Media) captures the many facets of Audrey Hepburn that made her such a singular figure in the 20th century, from her captivating beauty to her one-of-a-kind screen presence to her tireless work as an advocate for UNICEF, an organization with which she felt special kinship as a war refugee herself in her youth. Her off-screen life wasn’t all roses and klieg lights, but she was revolutionary in figuring out how to use her fame to put a spotlight onto worthy causes; director Helena Coan’s film skillfully explores both Hepburn’s artistic impact and her personal struggles and triumphs.

Also available: The “American Masters” documentary “Keith Haring: Street Art Boy” (PBS) examines the life and work of the pioneering street artist whose bold graphics injected both joy and defiance into the AIDS era; Los Angeles baseball fans in particular will want to remember the good times with “World Series 2020” (Shout Factory); “Michael Smerconish: Things I Wish I Knew Before I Started Talking” (Virgil/Kino Lorber) sees the radio host looking back on three decades on the air and examining the USA’s bitterly divided politics; Laika and the other canine cosmonauts get their close-up in “Space Dogs” (Icarus Films Home Video).

Author Bret Easton Ellis and director Tim Hunter (“River’s Edge”) team up for the serial-killer saga “Smiley Face Killers” (Lionsgate), starring Ronen Rubinstein (“911: Lone Star”) as a college student who fears he may be the next victim of a mysterious hooded figure (Crispin Glover) who may be behind the drowning deaths of multiple male undergrads.

The new “Dune” may have been pushed to 2021, but your giant-worm needs are fulfilled in a lavish new release of “Tremors” (Arrow Video) in 4K with tons of new extras; they’re both in supporting roles, but Nicolas Cage and Tony Jaa in a movie where “Jiu Jitsu” (The Avenue/Paramount) fighters face off against aliens has to be some kind of blackout-bingo win for genre fans; 1958 creature-feature “Giant from the Unknown” (The Film Detective) gets a limited edition 4K collector’s box set; if you miss those oversized VHS boxes, get your hands on the new Blu-ray release of horror cult fave “Tourist Trap” (Full Moon).

Despite the title, “Blade: The Iron Cross” (Full Moon) is part of the “Puppet Master” series and not the one where Wesley Snipes fights vampires; King Hu’s 1979 martial-arts heist saga “Raining in the Mountain” (Film Movement Classics) makes its North American Blu-ray debut in a new 2K restoration; two vacationing couples find anything but relaxation when a deadly microbe makes its way to “The Beach House” (Shudder/RLJE).

Barbara Bouchet (1967’s “Casino Royale”) and Henry Silva headline the lurid Italian crime movie “Cry of a Prostitute” (Code Red); whether you like martial arts, swordplay, gunfights, or zombie gore, you’ll find them all in the Japanese genre mash-up “Versus” (Arrow Video).

The whole staying-at-home-and-not-seeing-friends thing isn’t ending anytime soon, so what better time to tuck into “The Trip”: Four Course Meal (IFC Films), a collection of the four comedies (“The Trip,” “The Trip to Italy,” “The Trip to Spain,” “The Trip to Greece”) in which Steve Coogan and Rob Bryden play versions of themselves, travel through picturesque European locations, eat amazing meals, impersonate Michael Caine, and face the abyss of middle-aged discontentment? As vicarious thrills go, Michael Winterbottom’s quartet of “Trip” movies is exceptionally satisfying.

Remember the bags of Doritos with “Wonder Woman 1984” that hit grocery stores about six months before the movie itself finally got to open? The sequels to “Coming to America” and “Top Gun” were delayed, but that just gives you more time to check out Paramount Home Video’s new 4K releases of the original “Coming to America” and “Top Gun.” Eddie Murphy and Tom Cruise also get one other new 4K each (“Beverly Hills Cop” and “Collateral,” respectively), plus new Blu-rays of “Trading Places” and “The Golden Child” from Paramount Presents.

Joel Schumacher directs Mr. T., because why not, in “D.C. Cab” (Kino Lorber Studio Classics); Richard Lester has some fun with “The Return of the Musketeers” (Kino Lorber Studio Classics) even if he never quite recaptures the magic of the previous two adventures; fill in one of the gaps in the recent Criterion box set with “Fellini’s Casanova” (Kino Lorber) in a new 4K restoration; David Cronenberg’s brilliant, disturbing “Crash” finally gets the Criterion Collection treatment, and please don’t confuse it with that other one that won the Oscar; the Rock Hudson Collection (Kino Lorber) features a trio of the screen icon’s action-adventures (“Seminole,” “The Golden Blade,” “Bengal Brigade”) with a heavy dollop of Hollywood colonialism.

Jack Palance and Lee Marvin star in Robert Aldrich’s two-fisted war saga “Attack!” (Kino Lorber Studio Classics); “Continental Divide” (Kino Lorber Studio Classics) showed the multi-talented John Belushi at his most urbane and romantic, as a Chicago reporter who falls for nature-minded Blair Brown; Christmas is over, but every collection needs the classic comedies “The Shop Around the Corner,” “It Happened on Fifth Avenue,” and “Holiday Affair” (all Warner Archive Collection).

James LeGros and Drew Barrymore have an amour fou in Tamra Davis’ “Guncrazy” (MVD Rewind Collection); speaking of the 1990s, Gen-Xers will also want to snag the new 4K restoration of “Bodies, Rest & Motion” (Kino Lorber Studio Classics), starring Eric Stoltz, Bridget Fonda, Phoebe Cates, and Tim Roth; those more inclined toward the cinema of the 1950s will want to pick up the new Blu-ray releases of “Young Man with a Horn” and John Ford’s “Mister Roberts” (both Warner Archive Collection).

Sentimental favorite “Cinema Paradiso” (Arrow Academy) celebrates the 30th anniversary of its U.S. release; Survivor Ballads: Three Films by Shohei Imamura (Arrow) offers a trio of titles (“The Ballad of Narayama,” “Zegen,” “Black Rain”) from the Japanese master filmmaker; Francis Coppola takes another crack at the final chapter of his legendary trilogy with “The Godfather, Coda: The Death of Michael Corleone” (Paramount Home Entertainment); the end is near, and only the kids care, in the unsettling “Ladybug Ladybug” (Kino Lorber Studio Classics).

They don’t make ripped-from-the-headlines as almost-actionable as “The Greek Tycoon” (Kino Lorber Studio Classics) — starring Anthony Quinn and Jacqueline Bisset as a shipping magnate and a widowed former First Lady who are certainly not intended to be Ari Onassis and Jackie Kennedy — anymore; one of Faye Dunaway’s most fascinating early roles comes in the enigmatic “Puzzle of a Downfall Child” (Kino Lorber Studio Classics), finally available on Blu-ray; the thriller “Sudden Fear” (Cohen Film Collection) was a fave of François Truffaut, but also featured in the indispensable film guide “Bad Movies We Love” — either way, you’ll have a blast watching Joan Crawford fend off the homicidal plans of Jack Palance and Gloria Grahame.

Got a gift card burning a hole in your pocket? Why not splurge on a hefty box set dedicated to one of your favorite shows? Whether it’s the 21st century “Hawaii Five-0”: The Complete Series (CBS/Paramount) or the 1960s “Mission Impossible”: The Original TV Series (Paramount Home Entertainment), the trippy “Steven Universe”: The Complete Collection (Cartoon Network/WB), or the policier “Marseille”: The Complete Series (Kino Lorber), these collections will both provide hours of entertainment and look really distinctive on your media shelf.

“Perry Mason”: The Complete First Season (HBO/WB), featuring Matthew Rhys as the legendary attorney, is not your grandma’s version of this show; serve your kids a heaping helping of “Green Eggs and Ham”: The Complete First Season (Warner Bros. Home Entertainment); Kevin Costner’s got more ranchin’ to do in “Yellowstone”: Season 3 (Paramount Home Entertainment); and the horror of “Chernobyl” (HBO/Warner Bros.), 2019’s most 2020 show, feels all the more vivid in 4K.