In 1995, Toy Story introduced moviegoers to the Pixar style – a way of working that involved more than a great leap in the art of computer animation. Even more illuminating was the studio's willingness to ignore the anodyne conventions of family entertainment. Its writers were licensed like grown-ups while still managing to retain a sense of fun and wonder. 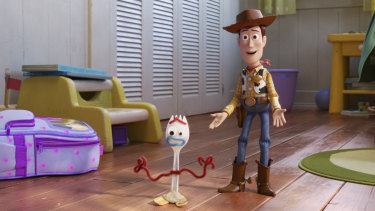 Toy Story's heroes and heroines were not human, but they could well have been. And they were not surrogate children. They shared the fears and preoccupations of most of the adults in the audience. The proof was in the choice of Tom Hanks to voice Woody, the toys' natural leader. This was the voice of a man who had been almost lost in space in Apollo 13 and was about to survive the Normandy landing in Saving Private Ryan before enduring years alone on a deserted island in Cast Away.

But none of those ordeals would compare with Toy Story. Here was his trickiest challenge – lending authority and pathos to a floppy pullstring toy with a face like a friendly shovel.

Woody was not merely a plaything. He believed that he had a duty to protect the child who owned him as if he himself were a parent. He also had to live with the knowledge that the child would eventually tire of him and that he'd be discarded or passed on to somebody else.

And at the end of the last film, that's where we left him and the other toys. Andy, the kid who had long been at the centre of their lives, was off to college and they were being handed on to a new owner, Bonnie, a toddler about to start kindergarten.

At one point, it seemed unlikely that there would be a fourth instalment. Despite its successes, Pixar had said that it was not making another sequel just for the sake of it. Then came the announcement that John Lasseter, the studio's creative chief, who made the first two films, would direct the fourth. But things did not go smoothly. First, the screenwriters walked and finally, Lasseter himself was forced out of the company over sexual harassment allegations, leaving his co-director, Josh Cooley, to take over with a rewritten script.

Will a lifetime of loyalty be enough to sustain him if he has to spend the rest of his time sitting in the cupboard?

Despite these setbacks, the series' verve endures with Randy Newman's jaunty score setting the rhythms and the same gentle wit underpinning the plot. This one's a road movie. Bonnie (Madeleine McGraw) and her parents go on holiday in a campervan, taking the toys, plus a new member of the team. Bonnie has come home from kindergarten with a plastic fork that she's fashioned into a stick figure named Forky (Tony Hale) and Woody and the others are doing their best to make him feel at home.

And there's a side trip to a cavernous antique shop, where Woody comes across his lost love, Bo Peep (Annie Potts), last seen being sent off to a new household. She's a figurine whose porcelain skin hides a will of iron. She and her sheep ("the girls") have long been on their own, living as "lost toys", and she's never been happier, she tells an astonished Woody. Much as he admires her independence, he's sure that he could never feel the same way – despite his new owner's complete lack of interest in him.

The antique shop's shadowy corners harbour other secrets, as well. Gabby Gabby (Christina Hendricks), a mischievous doll with a fierce desire for a home in some kid's toybox, creates enough havoc for some inventive chase sequences – aided by a couple of creepy ventriloquist's dummies, and Keanu Reeves voices an Evel Knievel type having trouble living up to his own publicity.
But belly laughs are scarce. A slight and fitting air of melancholy is evident.

Woody has been brought to the point where he must consider his future. Will a lifetime of loyalty be enough to sustain him if he has to spend the rest of his time sitting in the cupboard? It's a dilemma akin to the kind faced by someone contemplating retirement. If the series really is bowing out, it's doing so very gracefully.