Ludacris, a U.S. president and some of country music’s biggest stars support the Georgia team 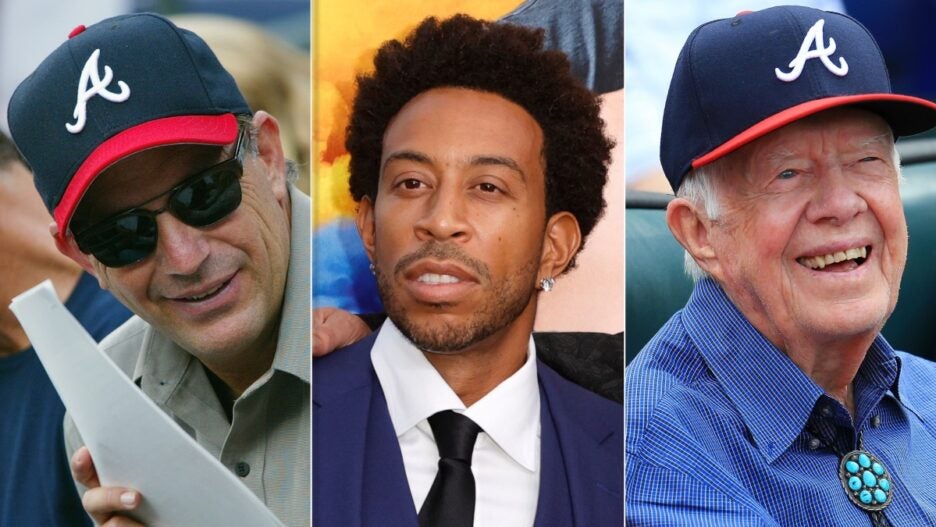 The Atlanta Braves are heading to the World Series for the first time since 1995, after defeating the Los Angeles Dodgers on Oct. 21 – and their fans couldn’t be happier. Here’s a look at some of the Braves’ most famous supporters who will no doubt be repping their team when they square up against the Houston Astros.

Kevin Costner
Kevin Costner’s dedication to making films about baseball is matched by his passion for the sport in real life. The “Field of Dreams” star is often photographed attending the Braves’ games.

Ludacris
Ludacris has always made his love for the Braves known. He’s thrown the first pitch, performed concerts for Braves fans and shared his support for the Georgia team on social media.

Jimmy Carter
Jimmy Carter, the 39th president of the United States, is a lifelong Braves fan. Carter delighted fans when he and his wife Rosalynn were caught on the Kiss Cam in 2015. He was also a longtime friend of the late Hank Aaron.

Quavo
The Migos rapper loves his hometown team so much that he designed a custom cap commemorating the Braves’ 1995 World Series win.

Cole Swindell
Country singer and Georgia native Cole Swindell performed at the Braves postgame concert series in 2014 and has been a guest on the team’s official podcast, “Behind the Braves.”

Jason Isbell
Grammy-winning singer Jason Isbell talked about bonding with his family over their love of the Braves in a recent episode of “Behind the Braves.”

Jason Aldean
The native Georgia singer shared an ecstatic post on Instagram after the Braves qualified for the World Series 2021.

Michael Kelly
The “House of Cards” actor and five-time Emmy nominee appeared on the “Behind the Braves” podcast in 2021.

André 3000
The Outkast singer is always proud to rep his hometown team. Earlier in October, Outkast’s “Ms. Jackson” lyrics were used by Bothe the Braves and L.A. Dodgers, who exchanged them in a lyric battle on Twitter.