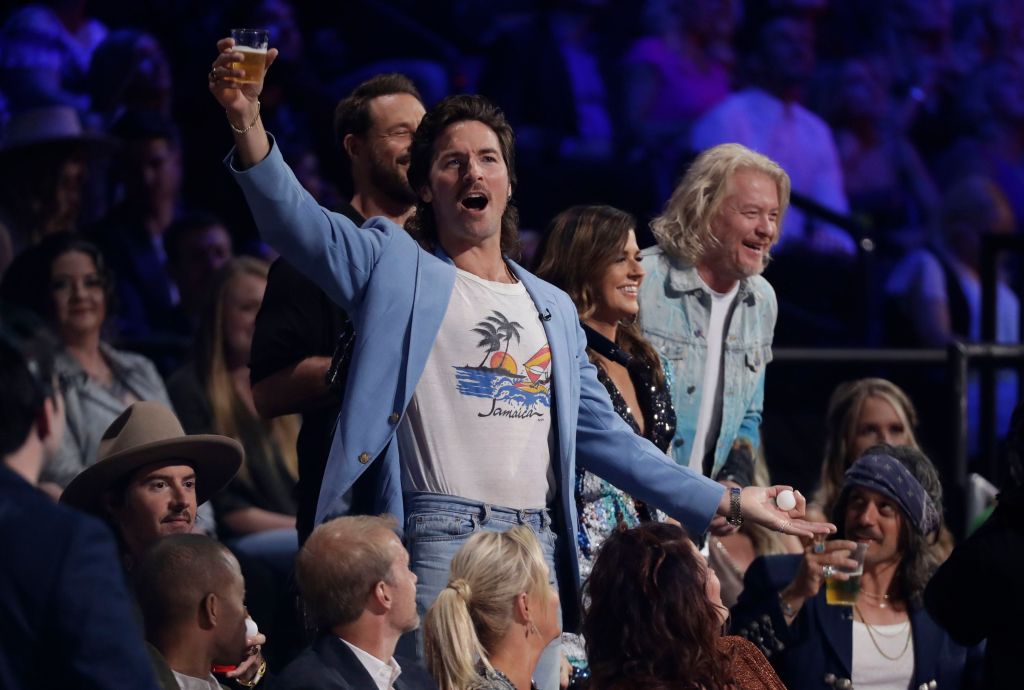 Best: Midland are agents of chaos.
The boys in Midland may not have a drinkin’ problem, but they sure played their on-the-rocks persona to the hilt during the CMT Awards. Though they didn’t perform or win anything, the Texas trio had gags to burn, including one they launched before the telecast when the newly engaged Mark Wystrach dropped to one knee to ask his bandmates to be in his wedding. They kept the party going with a welcome bit of loose cannon unpredictability during the telecast, thanks to Cameron Duddy popping up with a tray of beers for his band while Little Big Town were busy hosting. The bit devolved into a game of beer pong, with balls flying everywhere and even pegging Phillip Sweet in the forehead. Get these guys a hosting gig, stat. J.G. 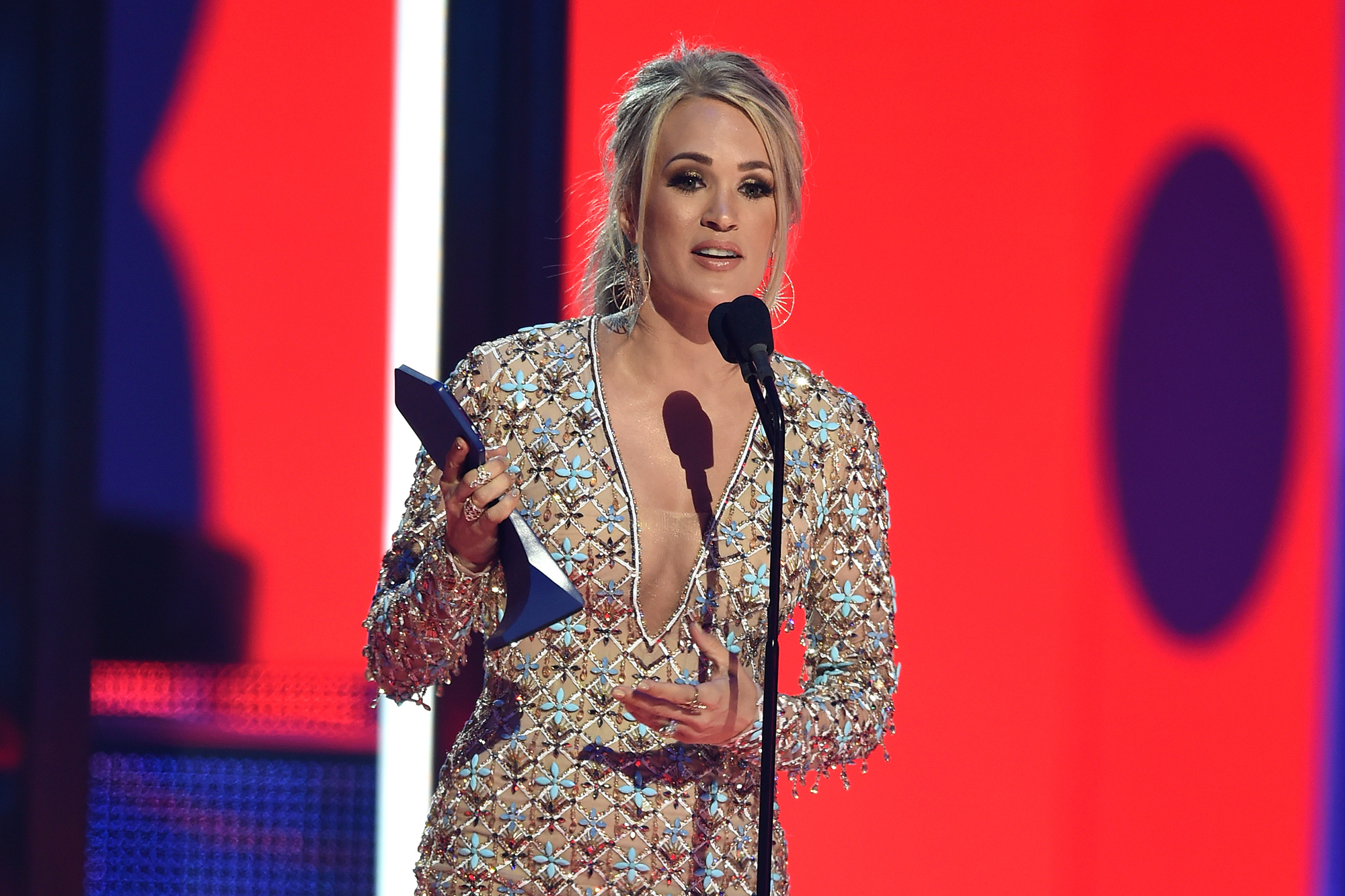 Best: The Ascent of Luke Combs
Luke Combs didn’t walk away with the biggest prize at the CMT Awards, but there was little doubt about his having top billing. Combs was a fixture throughout the show, from the Crocs joke that Little Big Town dropped in the monologue to his shared win for Performance of the Year with Leon Bridges. Ashley McBryde even snagged Combs’ beer on her way up to accept her own feel-good trophy for Breakthrough Video, proving he was never far from the center of attention. While he came up short to Carrie Underwood for Video of the Year, he got to close out the evening with a stomping version of his new single “Beer Never Broke My Heart,” an appropriate enough choice under the circumstances. Prowling and growling while the crowd lifted their drinks and confetti rained, Combs was the swaggering big man in the room and didn’t need any hardware to prove it. J.G. 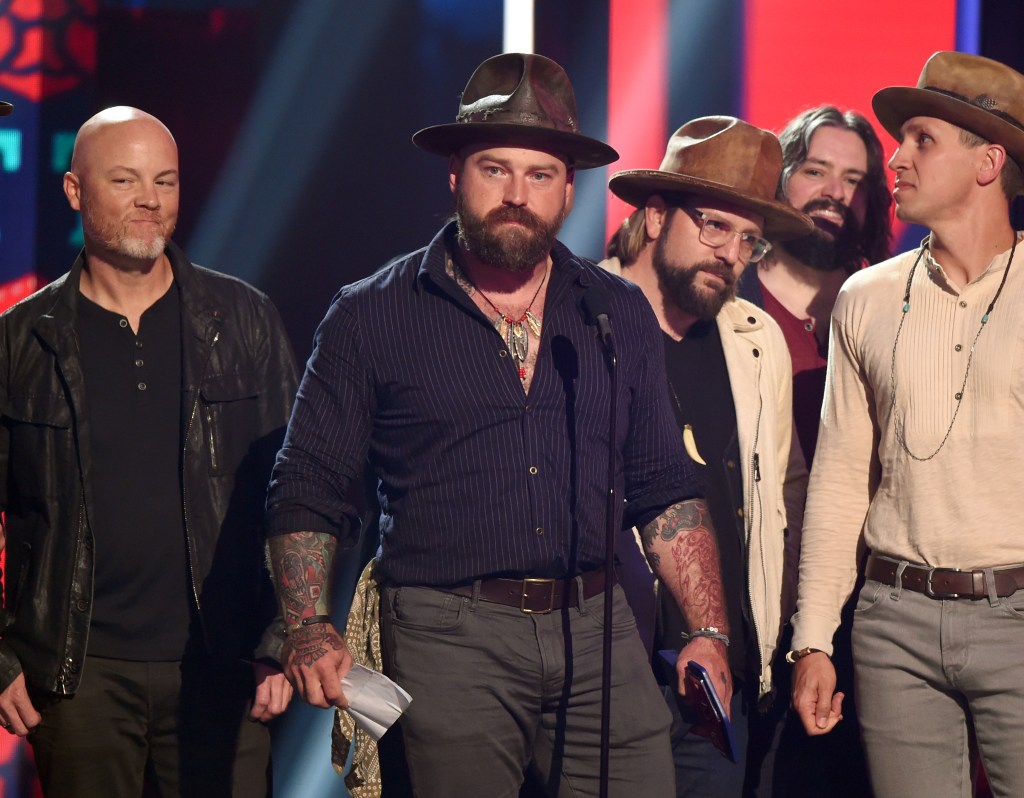 WTF: Zac Brown rages against the machine.
Zac, why so mad, bro? For a guy who’d just won an award (Group Video of the Year for “Someone I Used to Know”), Zac Brown sure seemed angry about something. Hands shaking and voice trembling as he read from a prepared speech, the bandleader used his time at the podium to rant about the evils of “the machine” and following your mercurial artistic impulses — in other words, the thing that is frequently recognized at awards shows. He signed off with a premeditated f-bomb disguised as faux-Ted Talk inspiration speech, saying that if you follow his example, you can “tell the haters to fuck off.” Coming from a wealthy guy who’s had an incredible run of radio success, it sounded like a pretty weird flex. J.F.

Worst: Toby Keith recites country singer names.
The Big Dog Daddy delivered his latest single “That’s Country Bro” to a young and confused outdoor crowd. While it’s a catchy tune, its lyrics are nothing but a litany of country legends’ names strung together. And it’s a dated list at that. The most current artist Keith mentions is Randy Travis, who made his debut some 33 years ago. Surely there have been some post-1980s artists worthy of inclusion — Alan Jackson? Miranda Lambert? Lee Ann Womack? If you’re going to tip your hat to those who made country music great, how about coming up with something that demonstrates the lyrical influence of masters like Roger Miller, Dolly Parton and Merle Haggard instead of hijacking their credibility via clumsy name-dropping? The poor craftsmanship of “That’s Country Bro” was even more glaring when Keith followed it up with a performance of his finely written 2003 hit “Beer for My Horses,” with Cole Swindell stepping in for Willie Nelson. H.K.

Best: Maren Morris and Sheryl Crow’s All-Killer, No-Filler Collab
Had Maren Morris only stuck around for one song on Wednesday night, it would’ve been enough to be one of the show’s highlights. Starting off seated on the steps of the purple-lit stage, she was moody and soulful on the slow burn of “Shade,” which built to an emotional peak as the band kicked in and Morris strutted. But Sheryl Crow’s arrival for their new collaboration “Prove You Wrong,” which  premiered earlier in the day, was just the thing to cut loose. A more country-tinged counterpoint to “Shade,” the song’s mid-tempo melody and singalong chorus was just plain fun — as demonstrated by a smiling Brandi Carlile, whom the cameras cut to as she clapped and sang in the audience. If “Shade” smoldered, then “Prove You Wrong” was unadulterated sass, a meeting of the minds between two artists whose easy chemistry was the real grounding for its flashy delivery and high-heeled message. J.G. 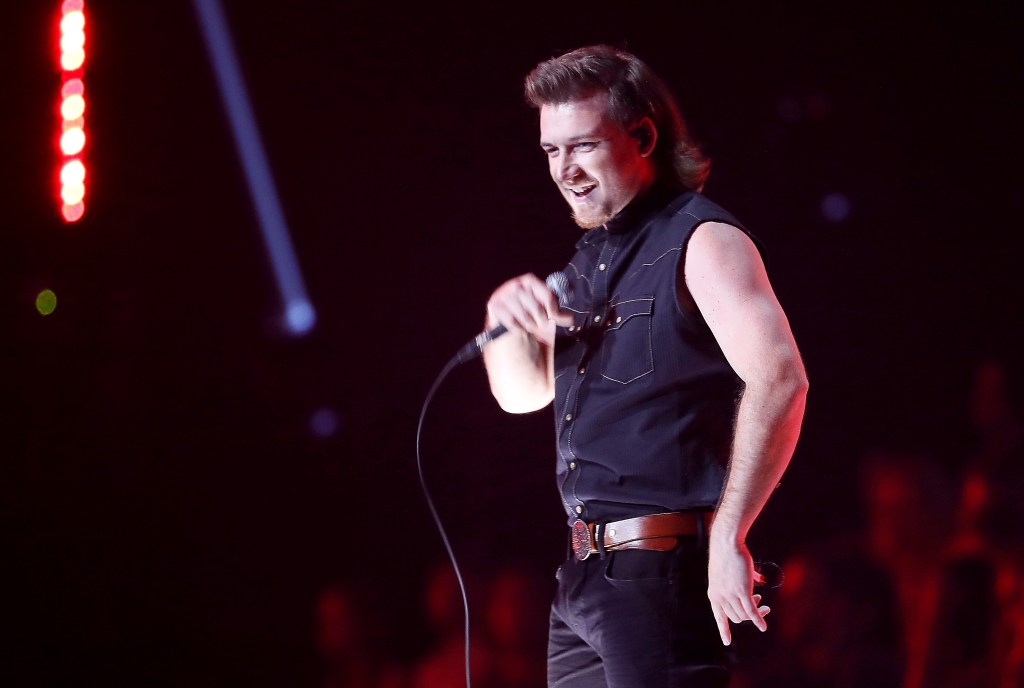 WTF: The return of the mullet.
For months, Morgan Wallen has been leading a one-man campaign to revive the mullet. Hailing from tiny Sneedville, Tennessee, the singer wears the business-in-front, party-in-the-back look surprisingly well. And he proudly sported the Joe Diffie-inspired mane when he sang his clever hit “Whiskey Glasses” in one of those too-short performances bumping up against a commercial break. More amazingly, it looks like Wallen has some new recruits in the Great Mullet Renaissance of 2019. Midland’s Mark Wystrach rocked his own take on the style throughout the CMTs, and Little Big Town’s Kimberly Schlapman even doffed a mullet wig as a playful nod to Wallen’s coif. But he can’t take sole credit for this Tennessee Top Hat epidemic — Mullet Mania seems to be picking up steam just as the king of the Kentucky Waterfall, Billy Ray Cyrus, is in the midst of a career resurgence. Coincidence, or something more? H.K.

Best: Boyz II Men provide an all-star assist.
Boyz II Men and Brett Young reprised their CMT Crossroads collaboration with a joint performance of Young’s “Here Tonight,” producing what was easily Young’s most energetic awards show performance to date. With his penchant for earnest balladry, Young’s previous TV spots have come off a little sleepy, but the thrill of sharing the stage with Boyz II Men allowed him to let go and sing with abandon. In the middle of the song, Young took a moment to bask in the glow of hearing Boyz II Men harmonize on a snippet of their Nineties classic “Water Runs Dry,” but the country singer held his own with the seasoned R&B stars here. Here’s hoping this Brett Young shows up again. H.K. 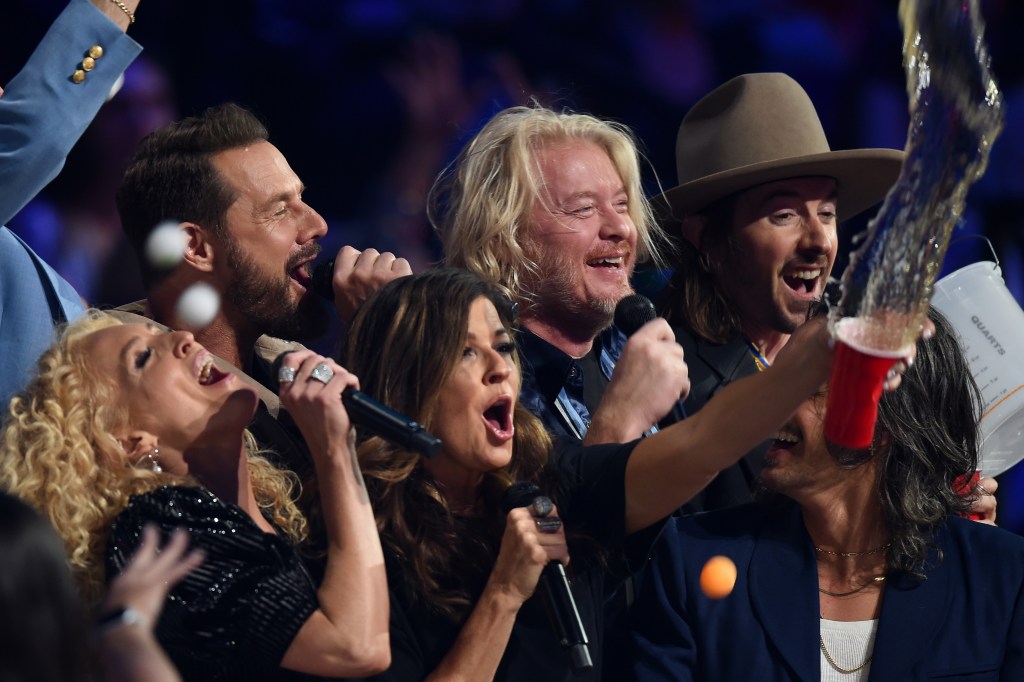 Best: Little Big Town’s brief monologue dials down the cringe.
Like Vince Gill hosting the CMA Awards throughout the Nineties and early 2000s, Little Big Town have the status and strong relationships in country music to lovingly poke fun at their peers without drawing blood. That’s exactly the role they played in their second turn hosting the CMT Music Awards. The quartet’s opening monologue was funny and concise — unlike the sprawling Royal Wedding bit from 2018’s show — with some good-natured ribbing of Dan + Shay and Brothers Osborne at the top of the show, followed by a slightly off-color joke about Luke Combs’ new line of Croc sandals. Coming on the heels of back-to-back opening performances, it kept things rolling at a fast pace and set the tone for even more playful moments later on. H.K.

Best: Tanya Tucker reminds everyone that she’s country royalty.
For all the CMT Music Awards’ all-star collaborations, none matched the power of Brandi Carlile and Tanya Tucker’s duet of the latter’s 1972 classic “Delta Dawn.” Bringing out Trisha Yearwood, Lauren Alaina, Deana Carter, RaeLynn, Carly Pearce and Martina McBride for backing vocals was more than enough to guarantee that. But from the get-go, the crowd inside Bridgestone Arena was on here for it, letting out a roar of approval at Tucker’s first gravelly notes of the opening verse. Indeed, her rough-hewn vocals were a hard-earned complement to the pristine singing of Carlile. In most other scenarios, the crisp bottleneck slide work and Shooter Jennings’ appearance on piano could’ve been show-stealers, but the all-star send-up finished off as it should, with Tucker leading the last big refrain all on her own. J.G.

Worst: Game of Thrones’ Starbucks gag is deader than half show’s beloved characters.
One running gag that fell as flat as King’s Landing after a visit from Daenerys Targaryen and her dragon was Little Big Town shouting out a Game of Thrones “star” in the audience: the infamous and anachronistic Starbucks cup that found its way into an episode of the HBO series’ final season. Not only was it an instantly dated joke — GOT wrapped in May — it felt kind of odd coming in the middle of a live show where production mistakes are a matter of course. It also served to highlight the fact that none of the hundred or so cast members were in the house the way Nikolaj Coster-Waldau was at the ACM Awards in April. Sure, Sophie Turner and Gwendoline Christie are probably busy with a million things, but you’d think we could at least get Tormund Giantsbane, the Mountain, or hell, even Gilly. Or maybe the CMTs writers should have just stayed away from the whole coffee blunder entirely. J.F.