Andrea Bocelli’s rendition of Time To Say Goodbye with Sarah Brightman is one of the best-selling songs of all time, with over 12 million copies sold. And now the Italian tenor has sung the track solo alongside Croatian cellist Stjepan Hauser, a member of 2CELLOS. Shared on the latter’s social media feeds, the goosebump-inducing footage sees the duo performing together inside the Teatro Del Silenzio.

The Teatro Del Silenzio is an open-air amphitheatre located in Lajatico and was constructed at Andrea’s suggestion in 2006.

Translated Theatre of Silence, the venue is used for Andrea’s own concert every July. The structure is left quiet for the rest of the year, although this latest performance looks like an exception.

Speaking with Ocean Drive in 2017, the Italian tenor highlighted Time To Say Goodbye as one of his favourite songs to sing.

The 62-year-old said: “It is undeniable that, in its own way, this song has become a classic in every corner of the world, giving strong emotions and entering people’s hearts. I, for one, am never tired of singing it.” 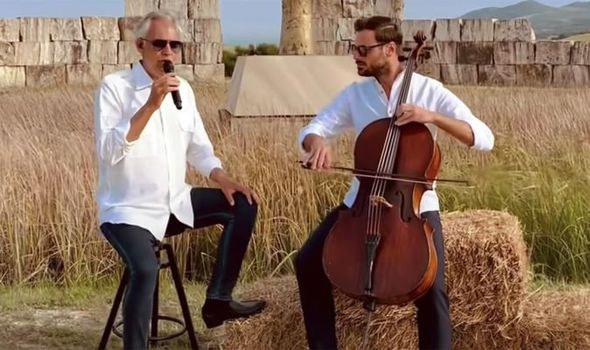 Hauser captioned the new video on his Instagram feed: “My dear Maestro Andrea Bocelli, one of the purest souls in this world, I’m beyond grateful for your hospitality and honoured to feel like a part of your extraordinary family.

“The song says it’s Time To Say Goodbye but I say this is start of something new!

The cellist has also been hanging out with Andrea’s talented son Matteo Bocelli. 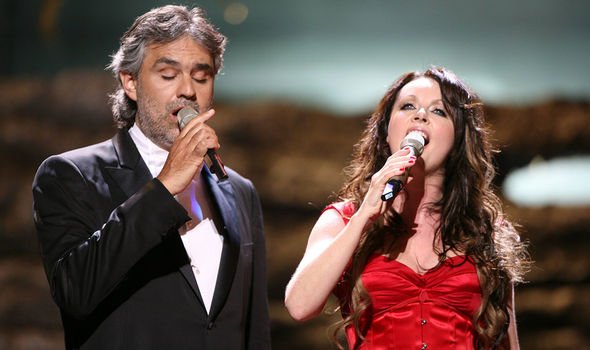 In a recent video, Hauser is seen playing his cello in a horse-drawn carriage driven by Matteo.

La Donna È Mobile plays as the two appear to be performing the track together.

Perhaps Hauser will feature on the 23-year-old’s upcoming solo album later this year?

Back in 2020, Express.co.uk caught up with Andrea and asked that tenor about his stunning Music For Hope concert.

On Easter Sunday 2020, Andrea performed from an empty Dumo di Milano before concluding an incredible five-song set outside on the 14th-century building’s steps.

Music For Hope has been watched over 41 million times on YouTube and now the 62-year-old has spoken out on one of the most iconic performances of his career.

Speaking exclusively with Express.co.uk, Bocelli said: “It was a moment of great emotion and regeneration.

“Music is an expression of the sacred, a readily available bridge across which faith can be revealed to us beyond the veil of our noisy, everyday lives.”

Andrea Bocelli sings with his children at Saudi Arabia concert

Bocelli admitted that while the Duomo di Milano was empty, the loneliness was a sort of mirage.”

He added: “There were really millions of us there, interconnected through music, and I gave my voice to both their prayer and my own.”

“Our Christian Easter, with its message of love and redemption, seemed to me like the perfect time to take a moment to stop and reflect upon things, as well as offering a moment of hope.”

The solo performance saw Bocelli perform Panis Angelicus, Ave Maria, Sancta Maria and Domine Deus, before ending with Amazing Grace on the steps of the cathedral.