The iconic opera singer has returned to Lajatico, his hometown in Tuscany, Italy to perform live tonight. Andrea Bocelli will sing at the Teatro del Silenzio (Theatre of Silence), an open air amphitheatre. The 61-year-old convinced the municipality of Lajatico to build the outdoor venue back in 2006, of which he contributed to greatly.

Bocelli, who is the honorary president of the amphitheatre, performs there annually in July.

While for the rest of the year the Teatro del Silenzio remains silent, as its name suggests.

The concert streams live at 7pm CET, which is 6pm BST for British audiences. 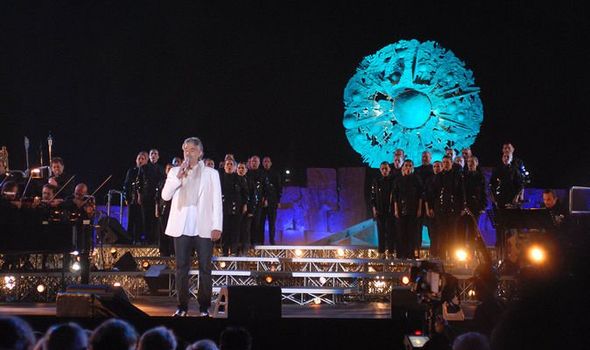 This year’s annual performance was supposed to be called Il Mistero della Bellezza, which means “The Mystery of Beauty”.

The concert is a reflection on beauty and nature, as teased in the trailer for today’s concert.

However, this specific performance has been postponed to 2021 due to the pandemic, hence the “Waiting for” part of the title.

So presumably, the tenor will perform something else today.

The Instagram video teased: “A deep feeling binds Andrea Bocelli to his homeland. In the following verses, a declaration of love by the Maestro for that landscape of moving beauty where the magic of silence can still be heard.”

The tenor sang inside and on the steps of an empty Duomo di Milano (Milan’s cathedral.”

Bocelli was invited to perform by the City of Milan and cathedral to give “an uplifting message of love, healing and hope through music”.

The opera singer’s solo performance saw him give renditions of Panis Angelicus, Ave Maria, Sancta Maria, Domine Deus and ended with Amazing Grace on the steps of the cathedral.

On accepting the invitation, Bocelli said: “On the day in which we celebrate the trust in a life that triumphs, I’m honoured and happy to answer ‘Sì’ to the invitation of the City and the Duomo of Milan.

“I believe in the strength of praying together; I believe in the Christian Easter, a universal symbol of rebirth that everyone – whether they are believers or not – truly needs right now.

“Thanks to music, streamed live, bringing together millions of clasped hands everywhere in the world, we will hug this wounded Earth’s pulsing heart, this wonderful international forge that is reason for Italian pride.”

He added: “The generous, courageous, proactive Milan and the whole of Italy will be again, and very soon, a winning model, engine of a renaissance that we all hope for.

“It will be a joy to witness it, in the Duomo, during the Easter celebration which evokes the mystery of birth and rebirth.”

While afterwards, Bocelli said: “I will cherish the emotion of this unprecedented and profound experience, of this Holy Easter which this emergency has made painful, but at the same time even more fruitful, one that will stay among my dearest memories of all time.”

Andrea Bocelli Live at Teatro Del Silenzio 2020 – Waiting for Il Mistero Della Bellezza 2021 can be live streamed in the UK at 6pm here.