Billie Eilish: Teenager of the Year

There’s a great moment in the Billie Eilish video for “Bad Guy” where you can behold everything that makes her the new pop queen for our moment. She steps into the club and gets carded — bad news, since as anyone on Earth knows by now, she’s just 17. The bouncer holds out his hand for her ID. Eilish takes out her Invisalign and drops it into his palm, all drippy with saliva. Eeewww. It’s one thing to hear her do this on her album — but another to see the blasé sadism all over her face. So awesomely disgusting. And you worried pop stars were running out of ways to shock people.

Eilish is more than just the teenager of the year — she’s the first invader from the next generation of pop masterminds, rewriting the playbook for how it’s done. She’s the rebel who has bypassed songwriting camps and superproducers to make her own eccentric songs with her brother. She sings about murder and blood and gore, whispering her creep-show electro nightmares. Four years after she came out of nowhere with the SoundCloud sleeper “Ocean Eyes,” she caught the music biz by surprise with her blockbuster debut, When We All Fall Asleep, Where Do We Go? What makes her a truly great pop artist is that she’s too ambitious to stop there. This girl wants the world, and she wants it now. 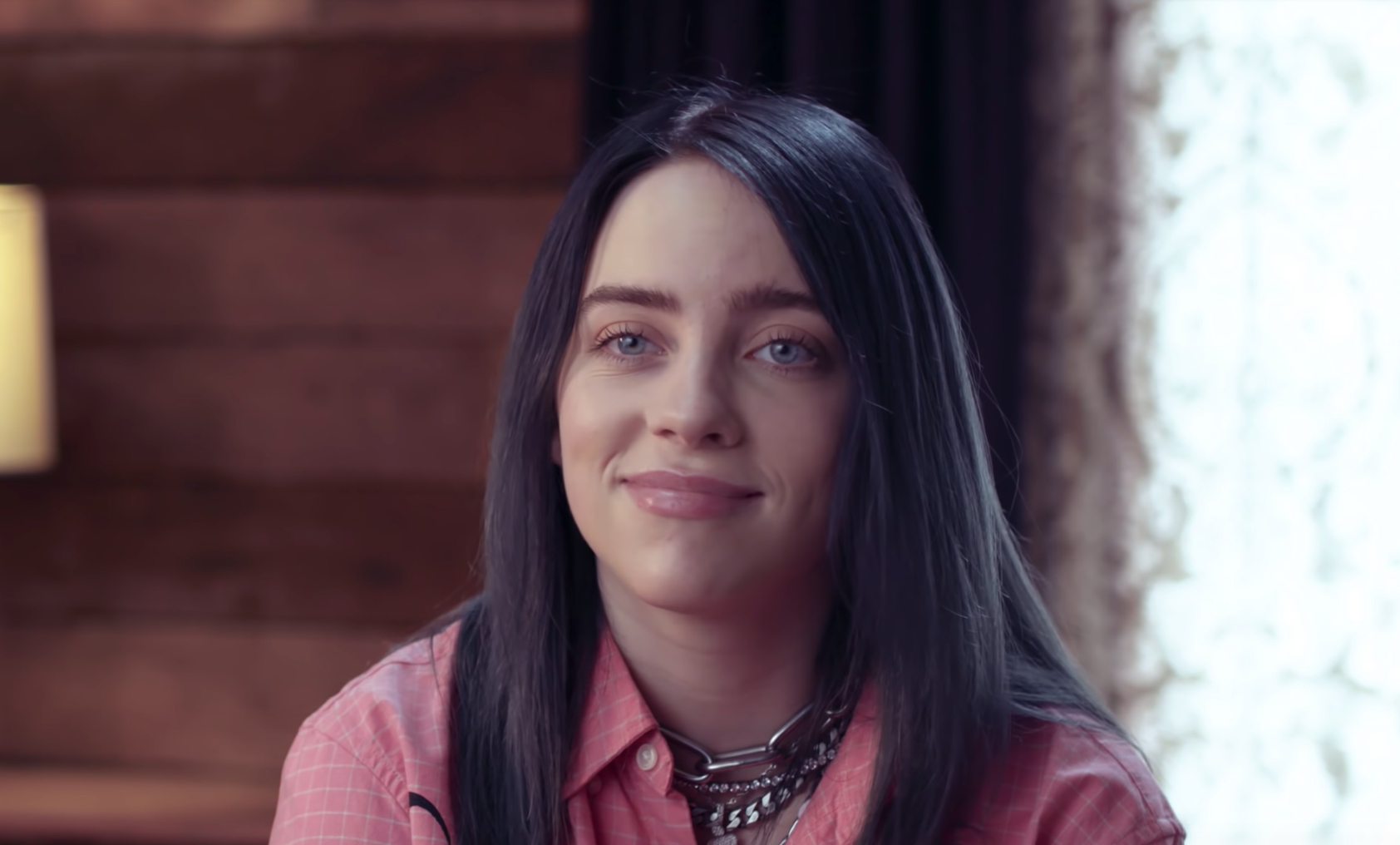 Eilish is the first hitmaker born in this century. She’s the same age as the iPod, which must be why she’s so unironically gung-ho about jumping between musical styles — she pillages gangsta rap, Hot Topic emo, mall grunge, goth balladry, fusing all the noise that keeps her awake. She wrote her first song at 11, as Walking Dead fan fiction, but the pulp horror in her music feels like her authentic way to vent the rage of a young girl battling to grow up on her own terms. You can hear it in the way she snarls, “I’m not your baby,” or how she titled her 2017 EP Don’t Smile at Me. When she sings “You Should See Me in a Crown,” the punchline is how she refused to wait around for anyone to crown her.

Eilish loves to rave about being inspired by rappers like Tyler, the Creator. “Childish Gambino created me, dude,” she said. Teen stars have always been required to stress their hip-hop fandom — a tradition that goes back to New Kids on the Block giving it up for Public Enemy. But Eilish didn’t just pick up rappers’ swagger — she studied their way of working under the radar, adapting the mixtape pace. She didn’t bother with a radio-friendly hit, the way upstarts are supposed to break. Instead, she’s a full-on album artist — at a time when experts keep telling us albums are obsolete.

Part of her mystique is her creative connection with her big brother, Finneas, who co-writes and produces the music in his bedroom. (Just like Kate Bush, whose brother Paddy turned knobs behind the scenes.) They grew up home-schooled by Hollywood parents — their dad once played a bartender on The West Wing, and Finneas joined the cast of Glee for the sad final days. When I heard they were home-schooled, I smiled and thought of Hanson, the Oklahoma brothers who blew up with “MMMBop” the summer Finneas was born. But I was taken aback when their dad revealed they were home-schooled because of Hanson. “They were religious Oklahoma home-schooled, but nonetheless,” he told The New York Times. “Clearly what had happened was they’d been allowed to pursue the things that they were interested in.”

Part of a teen star’s job is pissing off parents, but Eilish shows surprising signs of cross-generational appeal. She’s got a lot of Gen X mom energy. For the olds in the audience, she evokes the angst they lived out to Alanis Morissette, Courtney Love and PJ Harvey. (So much of the Eilish aesthetic comes down to Harvey’s spine-chilling, whispery “little fish, big fish” chant in “Down by the Water.”) Two of my friends have had the same experience listening to “Bad Guy” — their kids asked what the word “seduce” means. But that’s what happens when a star crosses borders — and that’s the kind of star she’s decided to be. “My daughters are obsessed with Billie Eilish,” one Gen X dad announced. “The same thing is happening with her that happened with Nirvana in 1991.” The guy who said this is Dave Grohl. In other words: Here we are now. Entertain us.

This story appeared in the June issue of Rolling Stone, on newsstands now.