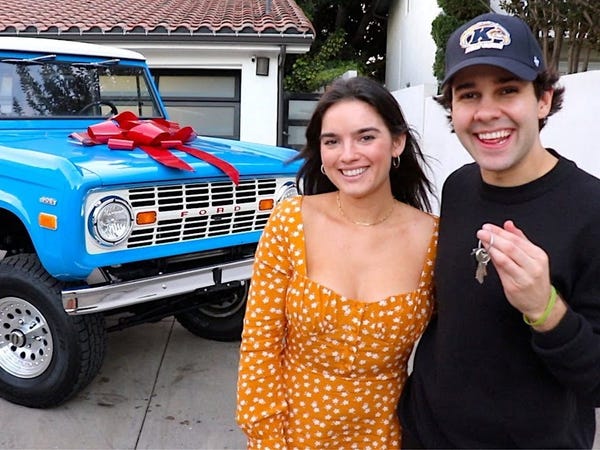 YouTuber David Dobrik spoke about having a stalker on the latest episode of his podcast "Views with David Dobrik and Jason Nash."

He told the story of a recent evening when a woman in her early 20s was banging on his door and screaming his name, and ended up keying his assistant's Ford Bronco.

The next day Dobrik received a text from his neighbor saying she had been banging on their doors the night before. They also said Dobrik's assistant Natalie Mariduena's car had been vandalized.

"The Bronco had like symbols in it, like letters, scratched," Dobrik said. "Full-on symbols sketched into the car. And it had my name in it too, like David spelled out. The D was a triangle; the A was a triangle. Everything was properly keyed."

It’s all smiles till she finds out it’s coming out of her paycheck. Happy early birthday Natalie!!!

Dobrik went outside to find the woman sitting next to the car. He sat down with her to talk and asked her if she was responsible for the vandalism. She said she was and had come back to apologize.

"She explains and she goes right back into being not all there and really scary," said Dobrik. "Obviously, she just needed help. And I told her, 'I'm going to call the police. I don't want to get you in trouble. I just want to get you help, is that OK?' And she said, 'Yeah that sounds good to me.'"

While waiting for the police, Dobrik asked the woman why she came to his home, and she told him she was watching his videos and "the guy who's in my head" told her to "go for it."

"She's like, 'I was told that if I came here, everything would be answered,'" Dobrik said. "And she kept coming to my house every night because she thought she was going to get these answers."

Dobrik said the woman insisted she wasn't on drugs, but she was "obviously very disturbed."

When the police showed up, they recommended he change his name on social media. Dobrik, who has 18 million subscribers, said it might be a bit late for that.

i love my job

Dobrik has recently moved away from the house where this incident happened. But while he was living there, he would have to deal with fans repeatedly showing up at his door.

In June, he posted a message on his Instagram story, which overlaid a video he took of a family standing in his doorway with their faces blurred.

Back in December, Dobrik shared videos of people knocking on his door and urged fans to stay away.

"This is crazy that I'm still making these stories, I literally feel like a broken record — I sound like my parents," he said. "But stop coming here, please. I don't wanna have to move, but this is terrifying."

Another person then showed up ten minutes after he posted about it.

"That is f—ing insane, I literally just posted," he said in a video reposted to Twitter. "Do you guys even watch this stuff? Stop coming here!"