Home » Music » Do the Spice Girls plan to give Australian fans what they want?

Do the Spice Girls plan to give Australian fans what they want?

Tweets were flying over the weekend from Spice Girls fans after Mel B said on stage '"we'll see you in Australia in February" after the last show of their reunion tour at London's Wembley Stadium.

Mel B (Melanie Brown) clarified her comments on radio this morning, telling 2Day FM's program "I announced it on stage, yes, without everybody else signing off 100 per cent."

However, a spokesman for international touring company Live Nation told The Age and SMH  that  Nation "at this time Live Nation has no information available regarding a possible Spice Girls tour''. 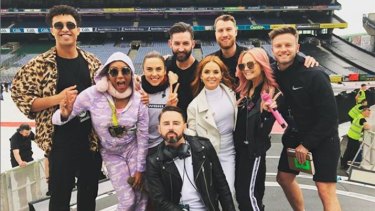 The Spice Girls ahead of the opening show of their reuninion tour, last month at Croke Park in Dublin.Credit:Instagram/Mel B

The Spice Girls' wrapped up their sell-out 13-date tour, which began on May 24 in Dublin with three triumphant performances in London. These hugely anticipated shows came after their last live performance together at the closing ceremony of the 2012 Olympics in London.

“You know me by now,” Mel B said on 2Day FM today, quickly hosing down talk of an Australian summer tour. “I always say the Spice Girls are going to continue and tour the whole world." She also said, while her bandmates Gerie Horner (Ginger Spice),  Melanie Chisholm (Sporty Spice) and Emma Bunton (Baby Spice) were "not on board fully yet" with playing shows in Australia, "I will make sure it actually does happen."

At the close of their final London show at the weekend, Horner also told the crowd she needed "to say something I should have said a long time ago" and apologised for leaving the band in the late 1990s. "I'm sorry. I'm sorry I left. I was just being a brat," she said." It is so good to be back with the girls that I love."

Horner, who released her debut solo album in 1999, also thanked the Wembley crowd for supporting the group on their much anticipated reunion tour this year. Original Spice Girls member Victoria Beckham (Posh Spice) did not join the tour.

"I want to say thank you to Melanie, Melanie and Emma and everybody who showed up for us. It has been something that I will never, ever forget. Thank you so much. Big love from the Spice World."