Mac Rebennack, the pianist, singer, songwriter and producer better known as Dr. John, who embodied the New Orleans sound for generations of music fans, died Thursday. He was 77.

A family statement released by his publicist said the cause was a heart attack. The statement did not say where he died. He had been living in recent years on the north shore of Lake Pontchartrain, Louisiana. 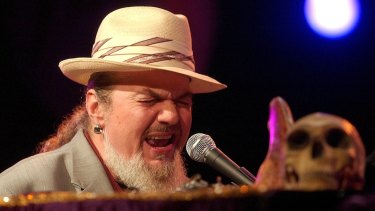 Rebennack belonged to the pantheon of New Orleans keyboard wizards that includes Professor Longhair, James Booker, Huey "Piano" Smith and Fats Domino. What distinguished him from his peers was the showmanship of his public persona.

Onstage as Dr. John, he adorned himself with snakeskin, beads and brightly coloured feathers, and his shows blended Mardi Gras bonhomie with voodoo mystery. 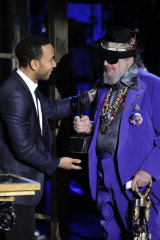 Dr. John, right, is presented his trophy by John Legend at the Rock and Roll Hall of Fame induction ceremony in New York. Credit:AP Photo/Evan Agostini

Rebennack recorded more than 30 albums, including jazz projects (Bluesiana Triangle, 1990, with drummer Art Blakey and saxophonist David Newman), solo piano records (Dr. John Plays Mac Rebennack, 1981) and his version of Afropop (Locked Down, 2012). His 1989 album of standards, In a Sentimental Mood, earned him the first of six Grammy Awards, for his duet with Rickie Lee Jones on Makin' Whoopee!

Malcolm John Rebennack Jr. was born in New Orleans on November 21, 1940. His father owned an appliance store; his mother, Dorothy (Cronin) Rebennack, worked as a model and in a music store. He was a photogenic baby whose picture appeared on boxes of Ivory Soap.

At a young age, he immersed himself in the sounds of New Orleans, first through the city's radio stations and then by following his father to nightclubs, where he would repair PA systems while young Malcolm peered through the window, watching musicians like Professor Longhair rehearse.

Rebennack, a virtuoso on piano and guitar, was tutored by Walter "Papoose" Nelson, who played guitar with Fats Domino. "In the days when it was very difficult for a black guy and a white guy to socialise, for a black guy to give a white guy guitar lessons" was "beyond beautiful," Rebennack said years later.

He started playing in clubs and on recording sessions as a teenager, and dropped out of high school to pursue music full time. 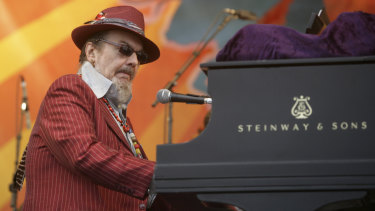 He played guitar up to 18 hours a day, seven days a week — sitting in at Bourbon Street clubs and strip joints, leading his own bands, mixing players from the city's segregated white and black musicians union, and recording more sessions than he could count. "We used to do sessions every day, sometimes two or three a day, and you just scuffled to get through," he remembered in 1973.

In his spare time, he wrote songs (he said he was the uncredited author of Lloyd Price's 1960 hit Lady Luck) and worked as an A&R man at Ace Records.

He also nurtured a heroin habit and engaged in constant low-level criminal activity. "I tried all the hustles, but I was never good at most of them," he wrote in his autobiography, Under a Hoodoo Moon, written with Jack Rummel (1994). "Turned out the only scam I was good at was forging prescriptions."

In late 1961, Rebennack interceded in a fight when a friend was being pistol-whipped; for his troubles, he took a bullet in his finger. The injury forced him to switch to piano and organ as his primary instruments. Not long after, the New Orleans district attorney, Jim Garrison, closed down many of the city's nightclubs in an anti-vice crusade, and the local music scene collapsed.

I thought to myself, What's all this? Because in New Orleans we put out just as much sound with only six guys.

After a heroin arrest, Rebennack did some time in prison. When he got out, in 1965, he headed straight for Los Angeles.

In California, Rebennack added barrelhouse piano flavour to pop and rock records, doing sessions with Sonny and Cher, the O'Jays, Frank Zappa and others. Producer Phil Spector, he recalled, "would pack a studio with 30 violins, 10 horns, a battery of keyboards, basses, guitars, drums, which, mixed with much echo, became his famous 'wall of sound.' I thought to myself, What's all this? Because in New Orleans we put out just as much sound with only six guys." 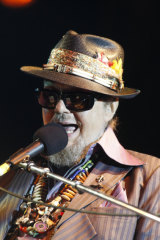 Mac Rebennack, in his stage persona as Dr. John, performs during the opening night of the Newport Jazz Festival,Credit:AP Photo/Joe Giblin

After a few years, Rebennack recorded a session of his own, blending New Orleans R&B, Creole chants, psychedelic rock and mystical lyrics. He had intended the frontman persona, "Dr. John Creaux the Night Tripper," to be played by a New Orleans buddy, Ronnie Barron; when Barron declined, Rebennack and his charismatic growl took centre stage.

The Dr. John character made its debut on that album, Gris-Gris, released in 1968 on Atlantic Records' Atco subsidiary, which became a hit on underground FM radio on the strength of hypnotic tracks like I Walk on Guilded Splinters.

Rebennack further developed the Dr. John persona (the name was borrowed from a 19th-century voodoo priest) on the albums Babylon and Remedies. As he wrote in his autobiography: "In New Orleans, in religion, as in food or race or music, you can't separate nothing from nothing. Everything mingles each into the other — Catholic saint worship with gris-gris spirits, evangelical tent meetings with spiritual-church ceremonies — until nothing is purely itself but becomes part of one fonky gumbo."

As many albums as he made, however, Rebennack said he had earned more money cutting jingles. His clients included Popeyes chicken, Scott tissue and Oreo cookies. He also reached younger generations with his theme songs for the sitcom Blossom and the cartoon Curious George, and through his Muppet musician doppelgänger, Dr. Teeth, leader of the Electric Mayhem.

In 1989, after 34 years of on-and-off addiction, Rebennack quit heroin. In recent years he split his time between New Orleans and an apartment in the Washington Heights area of Manhattan, where he could be spotted with his trademark walking stick, adorned with voodoo beads, a yak bone, an alligator tooth and key rings from Narcotics Anonymous.

"I relate to people up there that kind of hangs on the streets," he told The New York Times in 2010. Asked if he spoke Spanish, like many of the neighborhood's residents, he said, "No, I don't even speak English."

A spokeswoman said his survivors include children and grandchildren, but provided no other details.