Home » Music » Experiment: I tested a viral TikTok theory that all McDonald’s cups hold the same amount of liquid

Experiment: I tested a viral TikTok theory that all McDonald’s cups hold the same amount of liquid 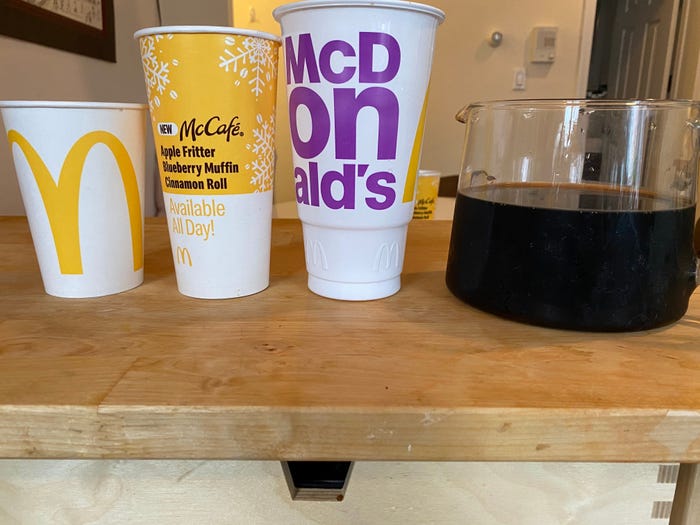 Over half a year after it was originally posted, an incendiary TikTok from creator @mykah.mykah that appears to show three differently sized McDonald's cups holding the same amount of liquid went viral once again.

In a video captioned "they do be lying to us doe," @mykah.mykah — who appears to be wearing a McDonald's uniform — pours liquid from a small cup into a medium, and then into a large. The catch is that the liquid from the small drink cup appears to fully fill each cup, suggesting that each drink size actually holds the same volume of liquid.

They do be lying to us doe, ##fyp ##fup ##foryoupage ##mcdonalds

The video, originally posted on March 3, has amassed over 11 million views and approximately 1.6 million likes in the time that it's been live on TikTok. It's not quite clear why the video is receiving renewed attention over eight months since it was uploaded — the Daily Mirror published a story about the video on November 5, and the Daily Star on November 6. Since then, other outlets including Fox Business, USA Today, and The Daily Dot have covered the TikTok, helping to bring it into viral consciousness once again.

The video has one big red flag — @mykah.mykah doesn't show the empty bottom of the cups, meaning that there could potentially be liquid hiding out to boost the volume, a trick that Snopes reported has been used in similar viral videos

I set out to test the premise of the video for myself, making multiple McDonald's runs to confirm whether or not their cups indeed held the same amount of liquid.

First, I measured the volume of the soda contained within each cup

While I wasn't able to get the exact same cups that appear in @mykah.mykah's video, I ordered a small, medium, and large soda from two different McDonald's.

Before doing any pouring, I wanted a baseline of how much liquid was actually in each cup. While my measuring skills weren't perfect — I used a large mason jar and a Pyrex measuring cup — I was able to get a rough estimate of the liquid in each.

These measurements weren't precise by any means, but they do give a ballpark estimate of the amount of liquid contained within each soft drink size at McDonald's, and make it clear that the capacity of a large is much bigger than the capacity of a small. Even before doing the pouring test, things weren't looking good for the theory that all of the cups had the same volume.

I had to conduct the same test that @mykah.mykah did in the viral TikTok video in order to really prove that all McDonald's cups didn't have the same volume.

From that point, all I had to do was pour from cup to cup to see how much the soda contained within the small cup filled up the medium and large ones.

First, I poured from the small to the medium.

Then, I poured from the medium to the large.

Finally, I poured the liquid from the large back into the small.

To really prove things, I poured the liquid from a full large cup into a small

Just to be completely sure, I poured all of the soda contained in a large cup into a small cup with a bowl beneath as insurance. It went just about as well as I expected.

No, McDonald's cups don't all hold the same volume of liquid

Overall, my experiments clearly indicated that the large McDonald's cup does indeed hold more liquid than the small cup and that all three sizes have different capacities. That means that @mykah.mykah's original video from March is just another iteration of a well-done prank, albeit one with unclear implications — I was only charged one dollar for each soda — small, medium, and large — that I ordered at McDonald's.

Both McDonald's and @mykah.mykah did not immediately respond to Insider's request for comment.