Radiohead has released 18 hours of previously unheard material from the studio sessions for its landmark 1997 album, OK Computer. According to guitarist Jonny Greenwood, the English rock band decided to release the outtakes as a way to thwart ransom-demanding hackers. 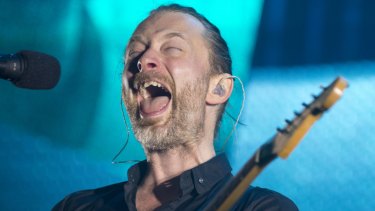 Greenwood wrote on the Radiohead Facebook page that someone had stolen a MiniDisc archive belonging to frontman Thom Yorke last week and demanded $US150,000 while threatening to release the material. "Instead of complaining – much – or ignoring it," Greenwood continued, the band members decided to upload the tracks to Bandcamp, where they will be accessible for the next 18 days.

"MINIDISCS (HACKED)," as the digital album is called, costs 18 pounds and will benefit Extinction Rebellion, an environmental activist group. The details warranting the "HACKED" descriptor are fuzzy at best – Greenwood himself used the word "reportedly" while describing the hackers' monetary demands, and it is unclear whether physical discs were stolen, or whether Yorke's computer got hacked.

(Some Reddit users got ahold of the leaked material last week and catalogued it online, insisting that they were not the hackers and that "the rumour about the XL Recordings intern stealing the tracks right in front of Colin Greenwood as he sat there doing nothing is unconfirmed, but most likely untrue.")

What we do know is that the album consists of 18 tracks, most of which are around an hour long. While Radiohead members insist in both the Bandcamp description and in Greenwood's post that they might bore listeners – "Never intended for public consumption . . . It's only tangentially interesting," he wrote – fans seem to think otherwise. One Bandcamp user wrote, "Blimey ! That's the best possible reaction for such a huge hack ! You've hacked the hackers and did it with so much humility and humanity!"

Greenwood was casual about the dramatic release. The album is "very, very long. Not a phone download," he warned fans, adding: "Rainy out, isn't it, though?"

OK Computer met with universal praise upon its release and helped forge the legend of a band that would become one of the most acclaimed of the two decades that followed. The album's themes of a tech-driven dystopia seemed to predict the coming existential crises of the coming century; it was added to the National Recording Registry in 2014.