Justin Burford is the first to admit making it big in Australia’s music scene came at a cost.

It was the mid-2000s when End of Fashion released their smash hit O Yeah, which spread across the country like wildfire and catapulted the Perth outfit to national success. 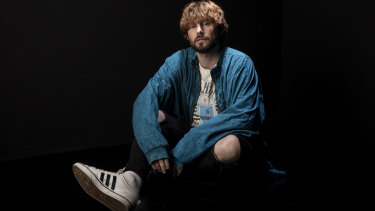 O Yeah was No.8 on the Triple J Hottest 100 countdown in 2005 and follow-up singles The Game and She’s Love debuted high on the ARIA charts.

However, as with all success, the flipside saw the band become a target for critics eager to tear them down.

“We blew up pretty big, and for a time there we were one of the ‘players’, one of the ones to watch,” Burford says.

“That generated a lot of … backlash. And some of that was hard to deal with, and I’ve had my run-ins with media in the past before.

“None of that stuff’s going to stop me from wanting to put music out and it took me a long time to sort of learn to be proud of being in this band and being the singer and being a pop songwriter in a rock ‘n’ roll band.”

Not long after 2012’s Holiday Trip Of A Lifetime, the band decided to go on hiatus and pursued other projects.

But now Burford is going back to where it all started – almost – and is on the verge of releasing new End of Fashion material, more than 15 years after their first EP hit shelves.

Burford, along with Nathan Sproule Cortez and fellow Sleepy Jackson alum Jules Dudman, will be taking to the stage at The Aardvark later in July.

A fitting venue, given the former Norfolk Basement was among a handful of the band’s first-ever gigs.

The frontman and founding member said he was excited to get back on the Fashion bandwagon, confident in the sound which once drew sharp criticism from cynical music fans.

Burford’s influences have changed and broadened over the years – “the tastes and the influences were probably a lot more narrow (back in the mid-2000s) than what they are now” – but what makes a song an End of Fashion song remains.

“Those things don’t necessarily influence what I think the End of Fashion sound is,” Burford says.

“Which I think has been a big part of the reason why something like this, us coming back with new music, hasn’t happened long before.

“It’s taken some time for me to sort of rediscover what End of Fashion actually means to me.”

The band returned in 2016 for a string of shows, while at the same time Burford added to his collection of songs and demos waiting to see the light of day.

But without the signature “sound”, Burford wasn’t happy releasing the material under the End of Fashion banner.

“Around this time last year I started compiling a lot of these demos and a lot of these songs together, and finding songs that I’d forgotten I’d written three or four years beforehand tucked away on my hard drive on my computer,” he says.

“As I went through them there were a few songs that started standing out to me that (I thought) ‘given the right treatment and put through the band, this could be an End of Fashion song’.

“It’s got that catchy chorus; the hook’s there, boil it down to 3½ minutes – boom – there’s a neat little pop-rock number, which I think is what End of Fashion is, there’s no point running away from that.”

The first new single is set to drop in September this year with an as-yet-untitled album planned for a release in early 2020.

Burford says the new material draws on a lot of influences, but says he remained careful about what an End of Fashion song is.

And as for the “haters”? Well, things have changed since the mid-2000s.

Myspace (and swept fringes) aren’t in vogue – but the landscape of music has also opened up, according to Burford.

“Haters don’t have the same amount of room that they used to have,” he says.

“They get people, they’re infectious, they’re fun … there’s just not as much room for people to be snobby because so many people are doing so many different things that we can all kind of find our niche and own what we are.”

As for O Yeah – that infectious, radio-friendly pop hit which gave the band their first major success – Burford still hears it on the radio and has fans sing it to him in person.

Rather than being annoying, it's a proud moment for him; a song he wrote in his bedroom is still being played and sung and enjoyed by people today, in 2019.

Having gone through the rigours of mainstream success and come out the other side, Burford has clarity on his music as End of Fashion; what it means, how it sounds.

“I have no guilt anymore for being a pop-song writer and wanting to perform and that is who I am and that’s the kind of music I like to make under the End of Fashion brand,” he says.

“And people like it, so why do I listen to a loud minority?”

End of Fashion play at The Aardvark in Fremantle on Friday July 26 and Saturday July 27. Doors open at 7pm, tickets are available from Eventbrite.