Home » Music » Here’s trouble! Amyl and the Sniffers spray it like it is

Here’s trouble! Amyl and the Sniffers spray it like it is

Amy Taylor's opening salvo is a fat spray of phlegm. Not a wee tweak of nasal traffic behind the drums, not a discreet spot of throat maintenance on the side, but a head-back and open-armed stage-front gob shower that arcs through the lights onto the upturned faces of the Tote's Thursday night throng.

Hello Melbourne, it says. We’re back! 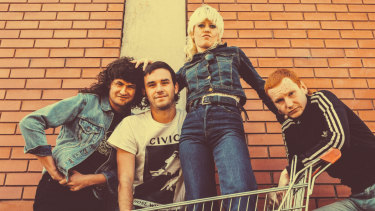 Amyl and the Sniffers have just returned from their third overseas tour. Credit:Jamie Wdziekonski

The curious mucus exchange that signifies punk rock communion has been much queried and dissected since the heyday of the Damned, the Pistols and the Clash. But with Taylor, the pint-sized screamer out front of Amyl and the Sniffers in her short shorts and tied top, you don't sense a deep background in social identity theory, or even rock history.

This one just wants trouble.

"There was a place called the Yac: the Youth Association Centre," she recalls of her first hardcore punk/metal gigs as a wide-eyed Mullumbimby 13-year-old. "Usually a free thing, all ages. No alcohol, which was fine. I didn't really drink. I just liked the music.

"I liked it because it was a bunch of sweaty big dudes pushin' everyone, punchin' everyone and gettin' real violent and it was like nothin' I ever saw. All I ever saw was a bunch of hippy people who were all happy: 'Everything's fine, no anger here'. Suddenly I saw a bunch of angry people and I thought, 'I like this'.

"Can be." She grins through bright red lipstick. "There's so much trouble in the world, how can you not be angry? But I do have a temper. Especially after a couple of drinks." 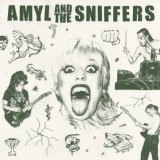 Amyl and the Sniffers’ self-titled album.Credit:

Asked if she remembers the last time she proper lost it, she looks past her shiny black vinyl trousers to her blood red boots and mumbles like a naughty schoolgirl. "No comment." Then she cackles like Harley Quinn.

Amy Taylor laughs a lot. Coiled in an armchair in the front lounge of a Collingwood pub, sipping on a mid-arvo Bloody Mary before the evening's gig up the road, she exudes the air of a wicked pixie living the dream.

It's barely three years since her band formed, then wrote, recorded and posted to Bandcamp their first four shrill punk-metal songs — all in the course of a single evening in a St Kilda share house.

As that rough and bleeding calling card infiltrated the Interwebs, the band hit it off with yob-rock veterans the Cosmic Psychos at home ("youse are sick, why don't ya play with us?"), then fell in with world-conquering Melbourne psych-rockers King Gizzard and the Lizard Wizard.

"Their drummer Eric [Moore] runs Flightless [Records]. He saw us and he was like 'Sick, yeah, nice one Ames. You wanna go on the label?' We're like, 'Yeah'. There's no contract or anything. We said, 'We'll do it if we can come on tour with ya', so that's when we went to America."

Now, just ahead of their debut album, Taylor and her uniformly mullet-headed mates Bryce Wilson, Dec Martens and Gus Romer have just returned from their third overseas tour. The cool kids of America and Europe love 'em, from the twitchy tastemakers of SXSW to the chi-chi folks running Gucci's Pre-Fall 2019 campaign in Sicily.

"It's weird, ay," Taylor says of the latter connection — check the faux-decadent glamour shoot now screening on YouTube. "They just called us up. [Gucci creative director Alessandro Michele’s] people called our people and then… I dunno. I really don't. It was a great time but… I'm so far from fashion world. I'm a Big W girl."

I've f—ed me knee and me tooth's chipped. I get black eyes. It's pretty gnarly but I like it like that.

Amyl's last blur around the USA has also spawned a six-page feature in UK rock glossy *Mojo*, a mag more renowned for its beard-stroking reviews of 40th anniversary box sets. "Surprise, bitch," Taylor responds. Clearly, the overnight commodification of Amyl's nascent punk rock charms is no cause for alarm.

"I am aware of that and it's strange," she says. "I don't know if I love it, but I'll give it a go. It's just kind of happening like that: the all-seeing eyes, pushin' us in that direction… I mean, before I played in the band I'd never been in a venue bigger than about 300 capacity so I don't know what's goin' on. It's just happening."

What could possibly go wrong?

"Worse comes to worst there's a bunch of people who say 'You f—ing suck' and I'm like, 'Too bad, get over it'. It was good working at the deli. I like slicing turkey." She laughs like a drain and downs her Bloody Mary.

Later, when the gob hits the fans at the first of two sold-out homecoming gigs at the Tote, it's clear that the smallgoods section of the Mullumbimby IGA will have to wait.

Gacked On Anger is the first song and the gig is an instant riot of flailing limbs. Early in the second, Westgate, Taylor throws her tiny frame into the crowd, surfs to a slightly undignified conclusion at her guitarist's feet, then gets up and does it again. 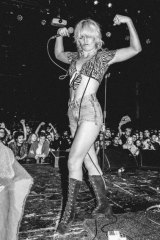 Amy Taylor on stage with Amyl and the Sniffers.Credit:Jamie Wdziekonski

Half the set is from the new album, recorded in the UK with the Arctic Monkeys' guy, Ross Orton. GFY is a highlight and thematic keynote. The lads peel off black Ts and singlets over dripping mullets as Taylor bawls her lungs out.

Fifteen songs slam past in 41 minutes. Three more airborne gobs fly stage left, right and centre and the houselights blaze up. What, no encore? Too bad, get over it.

"It's pretty physical," Taylor reflects on the ritual of violence that's launched a million bands and will doubtless sustain a million more.

"Like, I come back from tour with a sixpack and shit but my body is like a f—in' war zone. I've f—ed me knee and me tooth's chipped. I get black eyes. I wanna get another shiny one. It's pretty gnarly but I like it like that.

"I dunno." She grins with the bulletproof optimism of youth. "We'll see what happens in 50 years."

Amyl and the Sniffers' self-titled debut album is out today