Gladys could have saved us all a fortune by having Jade MacRae demolish the Sydney Football Stadium. One note should have done the job, such is the singer's staggering power. Were anything left tottering, Carl Dewhurst could have napalmed it with a guitar solo. MacRae doesn't do things by halves. Having penned a batch of songs buried deep in the R&B tradition, she assembled the absolute A-team of Sydney musicians to help her bring them to life. 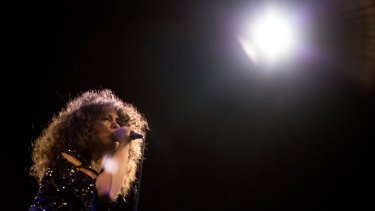 Jade MacRae showed off the staggering power of her voice.Credit:Jo Yeldham

MacRae, who should have become a major star 15 years ago, were such matters decided by talent rather than luck, joins a rich tradition of Australian female R&B singers that includes Wendy Saddington, Jeannie Lewis, Renee Geyer and Tina Harrod. For some years, she has toured the world with US blues guitarist Joe Bonamassa, meanwhile writing the songs aired here, which constitute a forthcoming album. Although expertly crafted and ideal showcases for her startling voice, they are also curiosities, rooted in soul music's 1960s golden era (think Etta James and Aretha), and eschewing more recent R&B developments.

But such puzzling idiomatic constraints became academic once MacRae opened her mouth, and her power was matched both by the unswervingly rich tone across her considerable range and by her contagious energy.

Yet sometimes the whole performance seemed almost too big, as if an arena concert had been shoehorned into a 300-seater. While the band ensured the songs could shrink dynamically, MacRae didn't quite manage to make them more intimate. Besides Dewhurst, that band consisted of Dave MacRae (piano), Clayton Doley (organ), Jonathan Zwartz (double bass), Hamish Stuart (drums) and backing vocals from Joy Yates, Juanita Tippins and Mahalia Barnes.

To thicken the night further, Darren Percival opened proceedings with a solo set of his looped singing and vocal percussion. He becomes ever more remarkable at doing this, his singing, effortlessly groovy and unassumingly virtuosic, even manifesting vulnerability. The looping made it something of a magic act, and yet Percival's honesty completely trumped any sense of trickery.