It's hard to define the exact sound of Maggie Rogers but my plus-one for her Melbourne show gives it a crack: like Stevie Nicks with a drum machine.

Rogers has the voice, certainly, but underneath that there's a distinctively modern-yet-old-fashioned sound: plenty of synth, a dash of folk, a twist of soul. 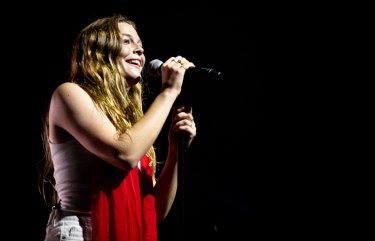 There were visions of Kate Bush, as Rogers commanded the Festival Hall stage wearing a white singlet top and white pants, with a large red scarf around her neck.

It was like watching someone dance without inhibition at a lounge room house party. The captivating performance included struts, spins, hip bumps and flicks of her long brown hair. She had to pause between songs at one point to catch her breath. 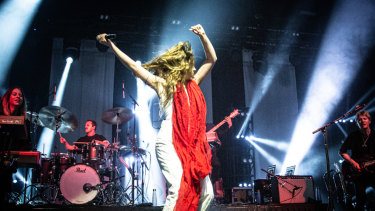 "I have a lot of feelings, as evidence by my performance so far," Rogers said to screams of appreciation.

Those feelings are expressed on Rogers' most recent record, Heard It In A Past Life. The album has continued to add to her solid fan base – the Melbourne leg of her Australian tour was moved from the Forum to cater for demand.

With a strong four-piece band behind her, she more than lived up to the expectation. Fallingwater and Light On were particular highlights. 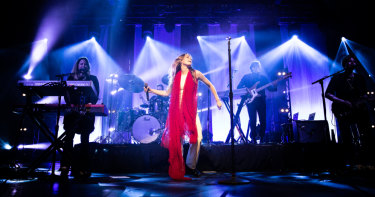 Much has been made of the songwriter's Pharrell Williams connection. Rogers still gets questions about the time she made the star cry with her song Alaska at a university masterclass.

"Three years ago my life changed seemingly overnight," she told the crowd without mentioning Pharrell's name.

As Rogers showed at Festival Hall, she has enough star power of her own.