Home » Music » Meet Rosalía, the VMA Performer and Nominee with a Fresh Twist on Flamenco Music

Meet Rosalía, the VMA Performer and Nominee with a Fresh Twist on Flamenco Music

Rosalía, one of music’s most exciting rising stars, is one of the performers to watch at tonight’s Video Music Awards. But there are more reasons to pay attention to her than her stint at the buzziest and wildest awards show of the year. Get to know the Spanish singer below—this won’t be the last time you hear from her.

She’s known for her modern spin on flamenco music.

Although Rosalía is often classified as a “Latin” artist, she’s originally from Spain. Born Rosalía Vila Tobella in Sant Esteve Sesrovires, Barcelona, the musician’s signature sound is a contemporary fusion of flamenco, pop, hip-hop, R&B, and a number of other sonic influences.

She told Dazed of the importance of the Andalusian musical genre: “My music wouldn’t make sense without flamenco. That’s my base – flamenco is the classical foundation I chose to build my music on. I fell in love with this music genre when I was 13 and since then, I’ve never stopped exploring it. Flamenco inspiration is, above all, the frame I compose my music within.”

She has two albums and a handful of cool collaborations.

In 2017, Rosalía released Los Ángeles, and the following year, she dropped El Mal Querer, which propelled her to another level of stardom overseas. According to her bio, the latter album became certified gold in the first week of release and became the most-streamed album on Spotify in Spain.

As for collaborations, she’s worked with J Balvin on their VMA-nominated hit, “Con Altura,” and appeared on his 2018 album, Vibras, on his track “Brillo.” She also appeared on “Barefoot in the Park,” a track on James Blake’s 2019 album, Assume Form. Most recently, she teamed up with Ozuna for the single, “Yo x Ti, Tu x Mi.” According to Pitchfork, Pharrell has invited the singer to work in his studio, although they haven’t released any songs together yet.

Rosalía’s collabs extend to the big screen too; she’ll make her feature film debut in Dolor y Gloria, which stars Penélope Cruz and Antonio Banderas. In other words, she’s on a roll. 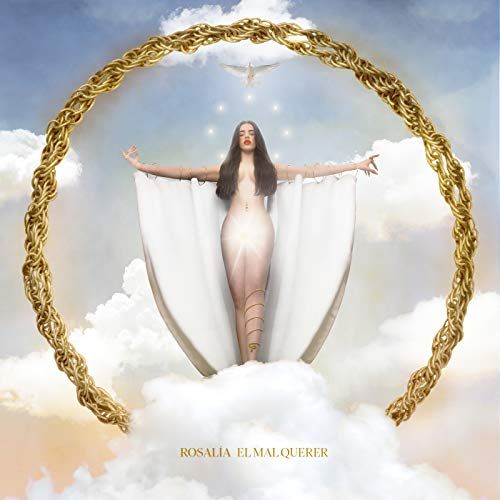 She already has a few awards under her belt.

Rosalía is a first-time nominee at this year’s VMAs, vying for Best New Artist, Best Latin Video (for her collaboration with J Balvin and El Guincho, “Con Altura”), and Best Choreography (also for “Con Altura”).

Aside from her VMA nods, Rosalía has already won two Latin Grammy Awards for Best Urban/Fusion Performance and Best Alternative Song, both for her moody hit “Malamente.” She also won the UK Music Video Award for Best Pop Video – International, also for “Malamente.”

We’re sure these accolades are only the first of many.

Her nail game is literally on point.

Scroll through Rosalía’s Instagram once and you’ll notice she’s already nailed her pop star wardrobe, but her mani is what really takes the cake. The singer’s tricked-out, gem-covered nails could give Cardi’s famous claws a run for their money. Whether she’s flaunting them onstage or on the ‘gram, the singer is always manicured to the max. The look has become so much her signature that killer nail art and salon culture were at the center of her “Aute Cuture” music video, which dropped in May.