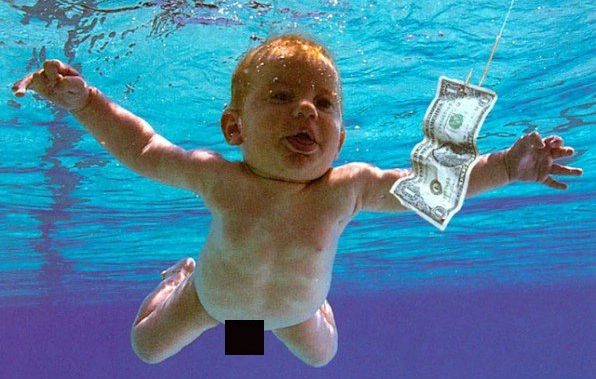 Spencer Elden was four months old when he appeared on the cover of the 1991 album, swimming naked in a pool and following a dollar bill on a hook.

The 30-year-old is suing Nirvana’s surviving members and Kurt Cobain’s estate, alleging that he could not consent to being pictured for the artwork, and claims he has suffered ‘lifelong damages’.

In the lawsuit, the artist claims that his legal guardians never signed a release ‘authorising the use of any images of Spencer or of his likeness, and certainly not of commercial child pornography depicting him’.

He is suing for distribution of private sexually explicit materials, negligence, and what is being described as an alleged ‘sex trafficking venture’ where Elden ‘was forced to engage in commercial sexual acts while under the age of 18 years old’.

The lawsuit reads: ‘The permanent harm he has proximately suffered includes but is not limited to extreme and permanent emotional distress with physical manifestations, interference with his normal development and educational progress, lifelong loss of income earning capacity, loss of past and future wages, past and future expenses for medical and psychological treatment, loss of enjoyment of life, and other losses to be described and proven at trial of this matter.’

Elden is seeking damages, attorney fees, a trial by jury, and an injunction to prohibit all parties ‘from continuing to engage in the unlawful acts and practices described herein’.

Weddle was a friend of Elden’s father Rick, who previously told NPR in 2008 that the photographer offered him $200 (£145) to ‘throw your kid in the drink’.

He said: ‘I was like, “What’s up?” And he’s like, “Well, I’m shooting kids all this week, why don’t you meet me at the Rose Bowl, throw your kid in the drink?” And we just had a big party at the pool, and no one had any idea what was going on!’

Elden has had mixed feelings about the Nevermind artwork over the years, having got the album title tattooed on his chest and recreated the image as an adult on the album’s 10th and 25th anniversaries.

Elden told GQ Australia: ‘I’ve been going through it my whole life. But recently I’ve been thinking, “What if I wasn’t OK with my freaking penis being shown to everybody?” I didn’t really have a choice.’

He claimed that he had reached out to Nirvana to be part of his art show, but was referred to their managers and lawyers, and said: ‘Why am I still on their cover if I’m not that big of a deal?’

Nevermind was Nirvana’s second studio album, and features the legendary grunge songs Smells Like Teen Spirit, In Bloom, Come as You Are and Lithium.

Considered responsible for bringing grunge into the mainstream, Nevermind reached number one in the US and has sold 30 million copies, making it one of the best-selling albums of all time.

Nirvana and Kurt Cobain’s estate have yet to comment on the lawsuit.