Home » Music » PewDiePie is back from his internet hiatus. Here's everything the YouTube megastar has been up to.

After a month long break from all online platforms — his first in ten years — YouTube megastar Felix "Pewdiepie" Kjellberg has resurfaced, and said he's ready to resume his regularly scheduled programming. In his first video since January, Pewds reviewed what's been going on in his community subreddit. In his absence, his fandom — the Bro Army — has been entertaining itself on Reddit with wholesome memes and hobbies, including cooking, painting, and Legos.

Pewds also filled viewers in on what he's been up to lately. Which, apparently, isn't very much.

"It's been nice actually," he said.

Here 's everything we know about how the creator and gamer spent his time off. 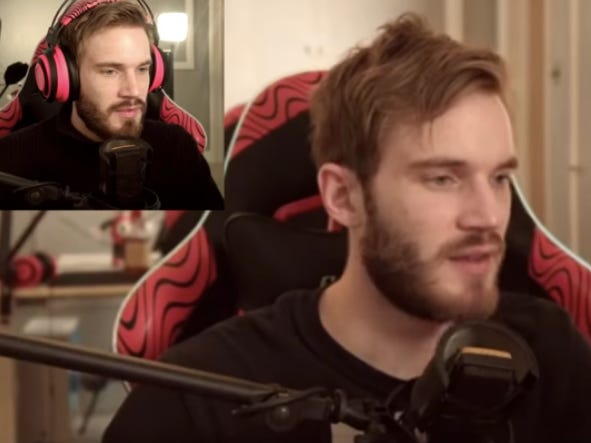 Perhaps the biggest revelation of Pewd's latest video is the beard he's now sporting. By his own admission, it is a lot less scruffy than it was a month ago.

"There's beard now," he joked. "We're gonna have to get used to this, that's fine. I'm sure everyone will comment about it anyway."

This rare PewDiePie sighting kept the Bro Army's hopes alive, when they began to worry whether he'd ever come back.

Here's a throwback for the true fans: this isn't the first time Kjellberg has performed the song online. To celebrate 100 million subscribers, he did a 12-hour live stream that included this acapella rendition with fellow YouTuber and gamer Jacksepticye.

Yesterday, on the way to the Temple, Felix spotted the cutest restaurant. It had an English menu with veggie and vegan options and we both loved it, so if you are ever in the area, do stop by @balearic.inshokuten for some good food (not sponsored). 🌴

Thanks to his wife and fellow influencer, Marzia, we have a good idea of how the pair spent their time together in Tokyo. In addition to visiting Gōtokuji Temple, they ate udon, hung out with friends, checked out some art, and snapped lots of very loved-up selfies.

Spying on his wife via security camera.

Per an Instagram Story caption on Marzia's account, Felix was checking their UK home's security camera and had, by chance, caught a glance of her hanging out on the couch. Marzia called the gesture romantic.

Kjellberg truly logged off during his hiatus, and didn't post "anything, anywhere." In his new video, he mentions feeling worn down by the negative side effects of internet fame, but the time away renewed his appreciation for his audience.

However, Kjellberg cautioned that he may or may not continue to do daily uploads, and there are changes he plans to make on his channel.

"But I'll do them gradually… I just think I've been obsessing too much about YouTube and just like, pushing myself way too hard for too long."

Kjellberg also hinted at "bigger projects" in the works for his subscribers.