Released 50 years ago, on June 16th, 1969, Trout Mask Replica — the third studio album by Captain Beefheart and His Magic Band — still sounds like a tomorrow that has not arrived, a music created at a crossroads of sound and language so far distant it continues to defy definitive summation and universal translation. Guitars jut out at improbably severe angles in ice-pick treble, like broken bones slicing through skin. The drumming comes in a rush of agendas, U-turn spasms of loose-limbed time and tempo under melodies which, in turn, feel like they are yet only partially born, still evolving in sense and structure. The singing is another primal logic altogether, an extreme in octaves and sustain that goes from hellhound bass to wracked falsetto, the pictorial cut-up frenzy of the lyrics run through archaic Delta-blues vernacular.

Here is an apparent chaos of pure impulse performed with insanely drilled conviction on a double LP of 29 tracks, only eight of which pass the three-minute mark; a mass of disparate roots — field hollers and Fifties R&B; Sixties garage rock and psychedelia; free jazz and tape manipulation — whipped together in a taut, explosive confrontation with no clear precedent and, after a half-century of canonization on “Greatest Albums of All Time” surveys, no certain legacy. The phrase “Beefheartian” is often used as a measure and compliment in record reviews, to assess the aspiring weirdness of other, especially younger artists. It is a misleading judgement, particularly in relation to Trout Mask Replica, the most Beefheartian album that the singer himself, Don Van Vliet, ever made. As punk icon John Lydon, one of the record’s most famous fans, told Pitchfork, “It was anti-music in the most interesting and insane way” — a “confirmation” to him, as very young man, frustrated by the rules in pop, that “there was room for everything.”

On Trout Mask Replica, breaking through the limits of coherence and cohesion already reset in the wide-open liberty of rock in the late Sixties, Van Vliet and his greatest Magic Band — guitarists Bill Harkleroad and Jeff Cotton, bassist Mark Boston, clarinetist Victor Hayden and drummer John French — established new margins of personal, idiosyncratic expression, much as the Velvet Underground did for drone, minimalism and literary transgression. But even Van Vliet — who continued to press his singular, soulful dada onto records as varied and inspirational as 1970’s Lick My Decals Off, Baby; the near-pop of 1972’s Clear Spot; and his true triumph, 1980’s Doc at the Radar Station — never made another album as foreign and raw as Trout Mask, maybe because it was too dangerous to go back there.

“That is a hell of a thing to ask somebody to do, to give blood like that,” Van Vliet, who died in 2010, said of composing in 1989, during one of my last conversations with him. Fifty years later, like its infamously literal cover, Trout Mask Replica still comes to you in vivid rivers of red.

Everyone with a copy of Trout Mask Replica has a story of walking into it for the first time, typically in disbelief. “I thought it was the worst thing I’d ever heard,” the cartoonist Matt Groening admitted in the 1997 BBC documentary, The Artist Formerly Known as Captain Beefheart. “It was just a sloppy cacophony,” he went on, until the “sixth or seventh” listen when “it clicked in, and I thought it was the greatest thing I’d ever heard.” In his original rave review of Trout Mask Replica in Rolling Stone, published in July, 1969, Lester Bangs initially admitted that “the rhythms and melodic textures jump all over the place … Given a superficial listening, they seem boring and repetitious.”

But as he reaffirmed a decade later, in a 1980 article in The Village Voice, Trout Mask Replica was “not even ‘ahead’ of its time in 1969. Then and now,” Bangs insisted, “it stands outside time, trends, fads, hypes … constituting a genre unto itself.” That album “reinvented from the ground up rhythm, melody, harmonics, perhaps what our common narrow parameters have defined as music itself.”

I came to Trout Mask Replica in the summer of ’69 with preconceptions — all formed by Beefheart’s first two albums: the eccentric, angular pop of 1967’s Safe as Milk and the rattling heavily-phased blues menace on 1968’s Strictly Personal. I heard the former LP’s garage-rock blitz “Zig Zag Wanderer” (with stinging-Byrds guitar by a young Ry Cooder) on FM-underground radio in Philadelphia and ordered the album from a local record shop. By the time I got it, I already had Strictly Personal and decided that Beefheart’s Magic Band were my Rolling Stones on Mars.

When I bought Trout Mask Replica, entirely on faith — encouraged by the affordable price, especially for a double LP, and the association with Beefheart’s high school friend Frank Zappa, who produced the record and issued it on his Straight label — I listened at first in shock, then embarrassment, as if I lacked the hipness to ride this atonality. But I refused to quit, playing at least one side a day and studying the six-page lyric insert like homework until I felt some connection, if not equilibrium. I came to realize that I didn’t need to understand the music; it was enough to lose yourself in it, to enjoy the sheer audacity and secret-society appeal — here was a record that wasn’t going to let just anyone inside — and let the restlessly moving parts congeal in their own time. 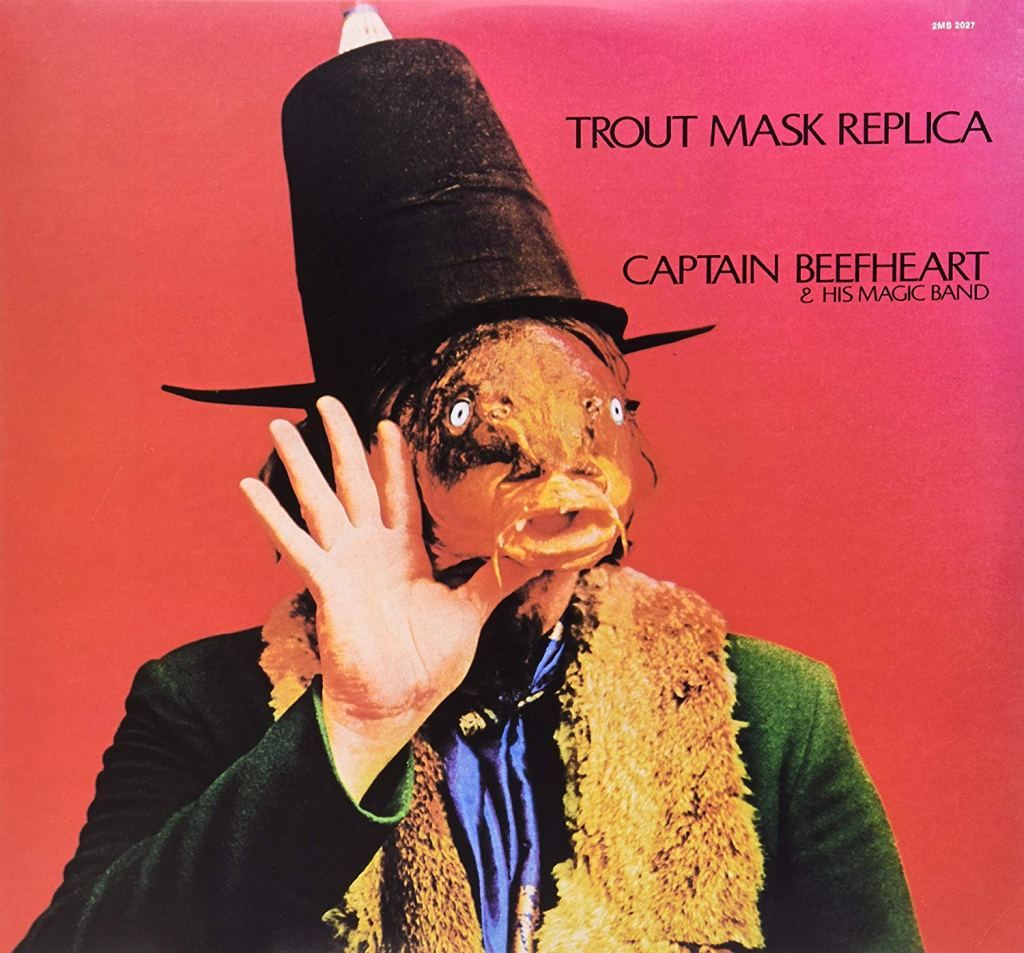 That happened in an aptly random sequence of tracks, mostly where the blues was closest to the surface: “China Pig,” an improvised John Lee Hooker-style boogie in Alan Lomax-field recording fidelity (with guitar by an old Magic Band member, Doug Moon); Van Vliet’s acapella chant “Well”; the unusually focused swing at the start of the last track, “Veteran’s Day Poppy,” and the elegaic tone of its extended coda, an instrumental mourning for the dead in war. Van Vliet was, in his roundabout way, a romantic. When I saw him for the first time in concert, touring behind the 1972 album, The Spotlight Kid, he responded to the cries for an encore — “More! More!” — by playing exactly that on soprano sax: “More,” the romantic theme from the 1962 Italian film, Monde Cane.

The myth of Trout Mask Replica‘s creation, largely sold by Van Vliet in the press at the time (including a 1970 cover story in Rolling Stone), has long been superseded by the darker truth of its genesis and the high price the band paid, in sanity and credit, for their commitment. Van Vliet, of course, did not write the entire album in one eight-hour stretch, and he did not teach the musicians how to play from scratch. Harkleroad and Boston, both in their teens when they joined the Magic Band in 1968, had worked together in other groups; Cotton played on Strictly Personal; and French was a teenager as well when he became the Magic Band’s drummer in 1966, driving both Safe as Milk and Strictly Personal.

Van Vliet’s insistence on colorful pseudonyms — Zoot Horn Rollo (Harkleroad), Rockette Morton (Boston), Antennae Jimmy Semens (Cotton), the Mascara Snake (Hayden, who was Van Vliet’s cousin) — effectively masked individual contributions. French, dubbed Drumbo, was dropped from the Trout Mask credits entirely in original pressings after conflicts with Beefheart resulted in the drummer briefly leaving the group. French has written extensively about the harrowing circumstances of Trout Mask‘s birth: Van Vliet’s autocratic control as the band lived and rehearsed together at a house in Los Angeles’ Woodland Hills, on the edge of starvation as French transcribed the raw data of Van Vliet’s composing — whistling ideas and banging on a piano, an instrument he could not actually play — and the band forged the fragments into angular, episodic sense. Excerpts from that hard labor were later released as part of a five-CD box, Grow Fins: Rarities 1965-1982 (Table of the Elements). (Disclosure: I wrote liner notes for the set.)

But the words were Van Vliet’s, sung in a “truly scarifying gallery of separate voices,” as Bangs put it in the Village Voice, “at various times a sagebrush prospector, Jews screaming in the ovens of Auschwitz, greased-back East L.A. pachuco” and “several species of floral, piscatorial and amphibious life.” In an America gripped by the dilemma of the Vietnam War, “Dachau Blues” was a frantic reminder of a horror not long past — “The world can’t forget that misery/’N the young ones now beggin’ the old ones please/T’ stop bein’ madmen” — while “Steal Softly Thru Snow” addressed Van Vliet’s obsession with another looming holocaust, humans’ inhumanity to the environment (“Man’s lived a million years ‘n still he kills”).

There was wit aplenty too. Van Vliet wrote about sex with ribald affection (“Pachuco Cadaver”), even without words — the manic instrumentals “Hair Pie: Bake 1” and “Hair Pie: Bake 2,” barely disguised references to female genitalia — but also about affection with surprising clarity and sympathy (“When Big Joan Sits Up”). In one of my interviews with him, Van Vliet used a telling visual reference to describe his urge to write and play music: “I’m just throwing up — in tie-dye.” His parallel life, as an artist, eventually won out. In 1982, after releasing the album, Ice Cream for Crow, and deciding that more than 15 years of struggle for recognition and anything close to a hit record was plenty, Van Vliet retired his Beefheart alias and his last Magic Band, concentrating on a second, more reclusive yet successful life as a painter.

He actually hinted at that as far back as Trout Mask Replica, in “Wild Life”: “It’s a man’s best friend/Wild life along with m’ wife/I’m goin’ up on the mountain fo’ the rest uh m’ life.” But there was too much tie-dye and blood in him, to get out, before that. “I make records for myself,” Van Vliet told me in the summer of ’82, shortly before he decided he’d given enough. But if anyone else was paying attention, he said, “It pleases me that they would be as bored as I am to listen to these things.”

Fifty years on, nearly a decade after Van Vliet’s death, Trout Mask Replica remains one of the ultimate tests of how far you are willing to go to give yourself up to music. It is not the first Captain Beefheart record you should hear. But you should not miss it. At the very least, you will not be bored.