9 Biggest Emmy Snubs and Surprises, From Kathryn Hahn to 'The Crown' Sweep (Photos) Plus Billy Porter, Ewan McGregor and just about everyone on ”The Handmaid’s Tale“ 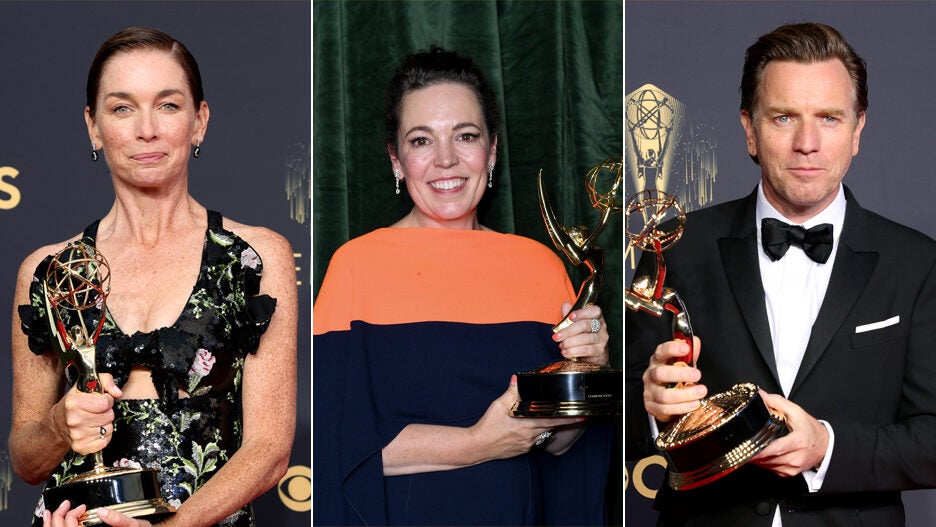 The 2021 Emmy Awards’ biggest shocker was its all-white list of winners in the night’s acting categories, but it wasn’t the only one. Here are the snubs and surprises worth mentioning.

Snub: All the major acting nominees who weren’t white. Despite multiple nominees of color in nearly every category, every major acting trophy was handed to a white winner on Sunday night.

Snub: Turns out it wasn’t Agatha all along, as HBO’s “Mare of Easttown” actress Julianne Nicholson ended up taking the prize for “Outstanding Supporting Actress in a Limited or Anthology Series or Movie,” an award many hoped would go to Kathryn Hahn for her role as fan-favorite villain Agatha Harkness character in Disney+’s “WandaVision.”

Surprise: A serious upset came in the supporting actor for a drama series category, a race that many expected to be won posthumously by the late Michael K. Williams for “Lovecraft Country.” Tobias Menzies’ shocking win for playing Prince Philip on “The Crown” Season 4 contributed to the drama sweeping all seven of its categories for the night.

Snub: Billy Porter made history as the first openly gay Black man to win Outstanding Lead Actor in a Drama Series in 2019, but the “Pose” star hasn’t been able to repeat in the year’s since, losing out to “The Crown” star Josh O’Connor on Sunday.

Snub: Bo Burnham’s Netflix special “Inside” was widely considered one of the best works to comment on the pandemic era, but the musical special missed out on a win for Outstanding Variety Special (Pre-Recorded) to the Disney+ filmed version of “Hamilton.”

Surprise: While “The Queen’s Gambit” was a frontrunner to win the night’s final award, Outstanding Limited or Anthology Series, it was still a bit of a twist to see the award go to the Anya Taylor-Joy-led Netflix series rather than HBO’s “Mare of Easttown,” which had a stronger showing in the acting categories.

Snub: Nearly every actor on “The Handmaid’s Tale” received an Emmy nomination this year, but the Hulu drama may have ended up splitting its votes, losing in every category it was nominated in this year. Between Sunday’s telecast and the Creative Arts ceremonies last weekend, the show walked away with a total of zero wins across 21 nominations, an Emmys record.

Surprise: “The Crown’s” Emma Corrin losing the lead actress in a drama series Emmy to their co-star Olivia Colman was a twist, given that the people’s princess was the favorite to win over the queen herself.