Home » TV » A Place in the Sun: ‘Lined myself up for that’ Jonnie Irwin red-faced over buyer’s comment

A Place in the Sun: ‘Lined myself up for that’ Jonnie Irwin red-faced over buyer’s comment

Host Jonnie was tasked with helping potential buyers Michael and Seamus a beautiful and spacious holiday house on the island of Majorca in the latest episode of the Channel 4 hit.

Yet during one of their walk-throughs in property number three, conversation took a slightly awkward turn for the trio.

Jonnie had been trying to build up the townhouse’s exceptional space, and it was all down to the fact it was located quite far outside the villages and main town centre.

But Michael and Seamus were more interested in having amenities, bars and restaurants close by, and alluded to being able to sacrifice some of the space to be nearer to the action.

“Are you telling me size isn’t everything?” Jonnie asked.

“You’d know that wouldn’t you?” one of the men shot back, a cheeky tone to his voice.

Instantly doubling over in laughter at the shocking comment, Jonnie took a breath before answering.

“I lined myself up for that one didn’t I?” he replied simply, and the potential buyers grinned once more.

The Irish clients were enthusiastic about finding something that satisfied their requirements in terms of character and features, but they struggled to find the one that ticked all of their boxes. 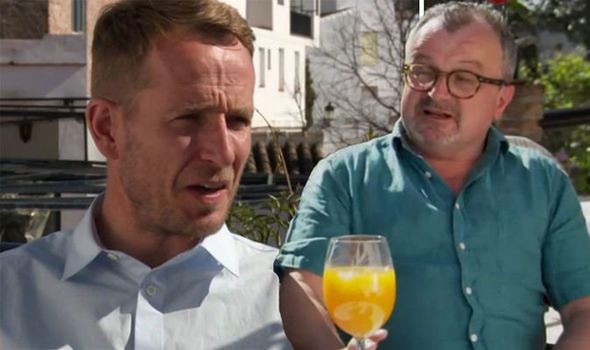 I lined myself up for that one didn’t I?

With the second property, it appeared the duo were leading towards an offer, and while the third and fourth houses were either too far out of the town centre or didn’t hold enough outside space, it was the fifth which seemed to do the trick.

With Michael and Seamus bowled over by the tiled floors, impressive kitchen and bathrooms, Jonnie was getting excited he was closing in on the pair’s dream holiday home.

Unfortunately it wasn’t to be, and Jonnie seemed a bit frustrated when Michael and Seamus declared they needed more time to consider their options.

Initially convinced the holiday-home hopefuls would make an offer, the presenter pressed: “Go on, jump in!”

Sadly, Michael and Seamus had made up their minds, and after detailing the issues one of the men said: “It’s not for us if that’s the case is it?”

“My warning to you both is you did genuinely really like that townhouse,” Jonnie tried again, determined to get the pair to reconsider.

“You do run the risk of losing it,” he noted.

Despite recognising another buyer could come in and nab the impressive property for £168,000, the men agreed they simply couldn’t commit.

It wasn’t all disappointment however, as the presenter later revealed Seamus and Michael had decided to stay in the area for a few more days to soak up the sun, and in the end decided to put an offer in on a project property.

A Place in the Sun continues weekdays at 4pm on Channel 4.