“It is so shiny and new and enormous!” said actress Anna Kendrick at the September 22 Academy Museum of Motion Pictures press conference — the museum’s final pre-opening press conference after financing shortfalls, earthquake retrofitting, leadership do-overs, and a pandemic lockdown — before the museum opens its doors September 30, nearly four years after its originally scheduled (and wildly optimistic) opening date.

Speaking in the round red-plush David Geffen Theater, which the Academy Museum hopes will attract multiple glitzy studio premieres (even if the bathrooms are all the way across a glass footbridge), Kendrick continued: “And it’s crammed with about 125 years’ worth of ideas, and dreams, and life-changing cinematic experiences. And I can tell you, everybody who works in the movies wants to see this place, and probably even more, be a part of it!”

If the actress was giddy with excitement, she might have been channeling the sentiments of the Academy itself — although some of that energy could be pure relief. Dawn Hudson, CEO of the Academy of Motion Picture Arts and Sciences, spent a decade pushing forward this museum project at an official cost of about $484 million — far more than the $388 million target.

“With our vast collections, the largest film-related collections in the world,” said the beaming Hudson, “and our extraordinary members, who have first-hand knowledge of every aspect of filmmaking, we knew we could create a museum worthy of the movies themselves. And that vision was still in the air when I came to the Academy 10 years ago. But something had changed. Those serving on the board of governors knew that the time to act had come. And so it began the process of making the movie museum for real.”

There are plenty of movie lovers who devoured LACMA exhibits dedicated to Tim Burton, Guillermo del Toro, and Stanley Kubrick, and the long-awaited museum will serve them well. It also arrives at a moment when two-hour movies don’t carry the same cultural currency as limited series; when the theatrical experience is on the wane for many moviegoers; and when the movie studios are under duress as their parent companies pivot to streaming. 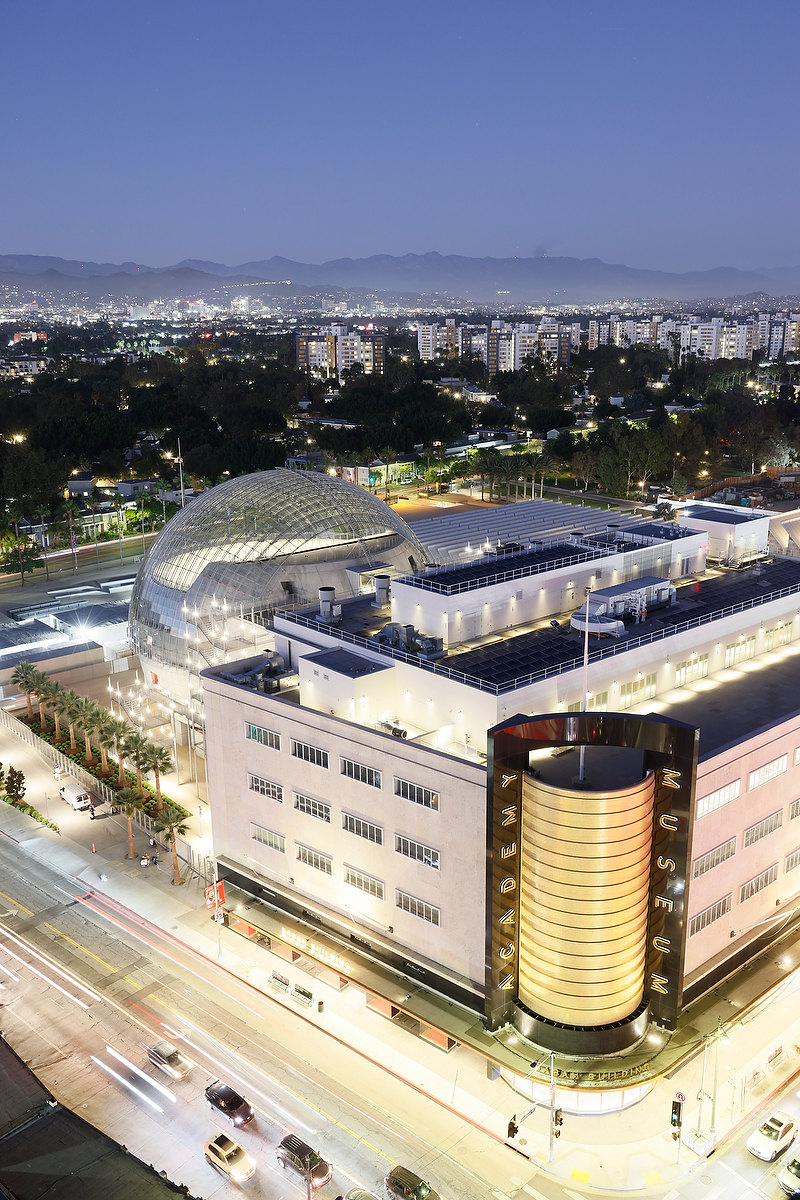 The Academy spent nearly a half-billion dollars to open its museum, but that’s only the beginning. To financially support and maintain this beautiful Renzo Piano-designed edifice, studio marketing teams will need to make the museum its go-to for red carpet movie premieres. I’ve heard that the Academy’s rates for the 1,000-seat Geffen theater are of a tier befitting its namesake; it’s not clear how that will play as the entertainment economy maintains movies but invests in streaming.  As the Academy — and everyone else — looks toward a digital future, will its hard-won museum only reflect the past?

Academy Museum director and president Bill Kramer steered the museum through its final stages, taking over in October 2019 from the first recruit, Kerry Brougher, and steering the exhibits away from timelines and toward a more engaging thematic approach. “We will be the world’s premier museum dedicated to the art and the sciences of movies,” he said. “Visitors will have an unprecedented opportunity to explore every facet of filmmaking and to directly connect with the movies that have left an indelible stamp on their lives. And for filmmakers, we hope this museum will become a home for enduring recognition, celebration and discourse among those who make and appear in movies.”

Also on hand was Tom Hanks, one of several hosts of upcoming ABC special “A Night in the Academy Museum,” to air October 12. “Do we need a movie museum?” he said. “Yeah, because we need to celebrate everything that this town has brought to the world, and everything this art form has brought to the world in order to bring people together. Whether you’re watching film on the last of the surviving Cinerama screens or you’re streaming them at home — on hopefully a good television monitor with the right lumen count and a good sound system — movies continue to be the magical art that speaks to everybody everywhere. And does that art deserve to be honored and explored and enjoyed in a museum? I hope the question answers itself!” 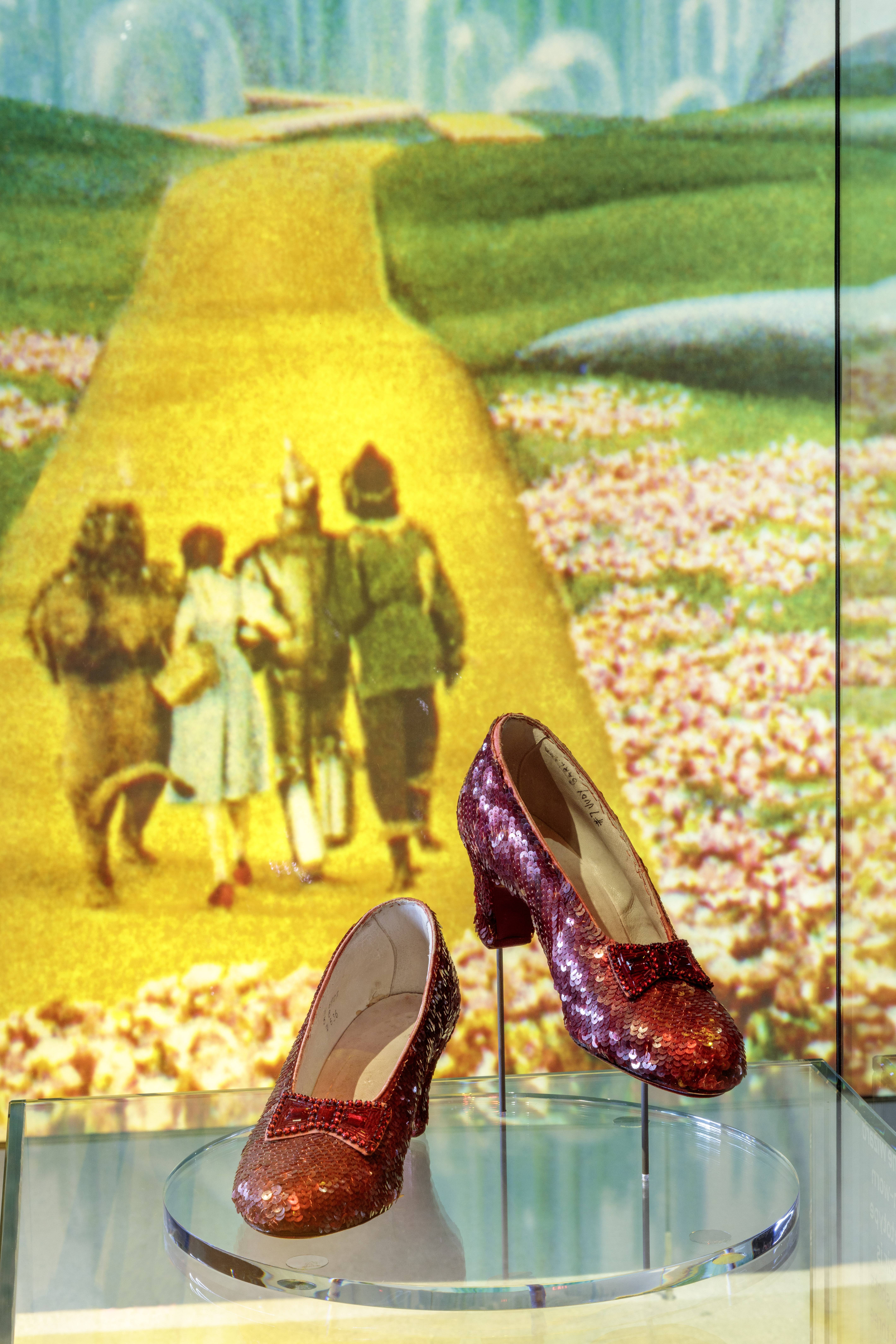 The iconic ruby slippers from “The Wizard of Oz”

Kramer also addressed the need to look at film history in the context of its mistakes. “When we look at the history of film as an industry, we need to be clear, honest and transparent. When we claim that the movies are a universal medium, and can speak to everyone, we need to be able to back up what we say, and whether there’s been controversy, we need to explore it. And we do.”

To that end, the Museum leaned on historian Jacqueline Stewart, who serves as the Academy’s chief artistic and programming officer, and an inclusion advisory committee led by Academy member Effie T. Brown. Among the museum’s galleries are explorations of topics such as “Racist Portrayals and Cross-Racial Casting” and “The Legacy of Minstrelsy in US Animation.”

“We are committed to telling complete, complicated stories,” Kramer told IndieWire. “That is our pledge… We can’t shy away from that.”

As for what’s on offer, the museum’s current repertory schedule reflects current exhibitions, including a Hayao Miyazaki retrospective, Sundance breakout “Real Women Have Curves,” and Bruce Lee actioner “The Way of the Dragon,” as well as a series of horror Oscar contenders: “Get Out,” “Pan’s Labyrinth” and “Psycho.”

Permanent collection Stories of Cinema focuses on the crafts of moviemaking, with the perfect Disney Animation drafting desk, and the work of “The Revenant” cinematographer Emmanuel Lubezki, sound designer Ben Burtt (with a deconstruction of a scene from “Raiders of the Lost Ark”), and Thelma Schoonmaker, the longtime editor of Martin Scorsese — Oscar winners all. 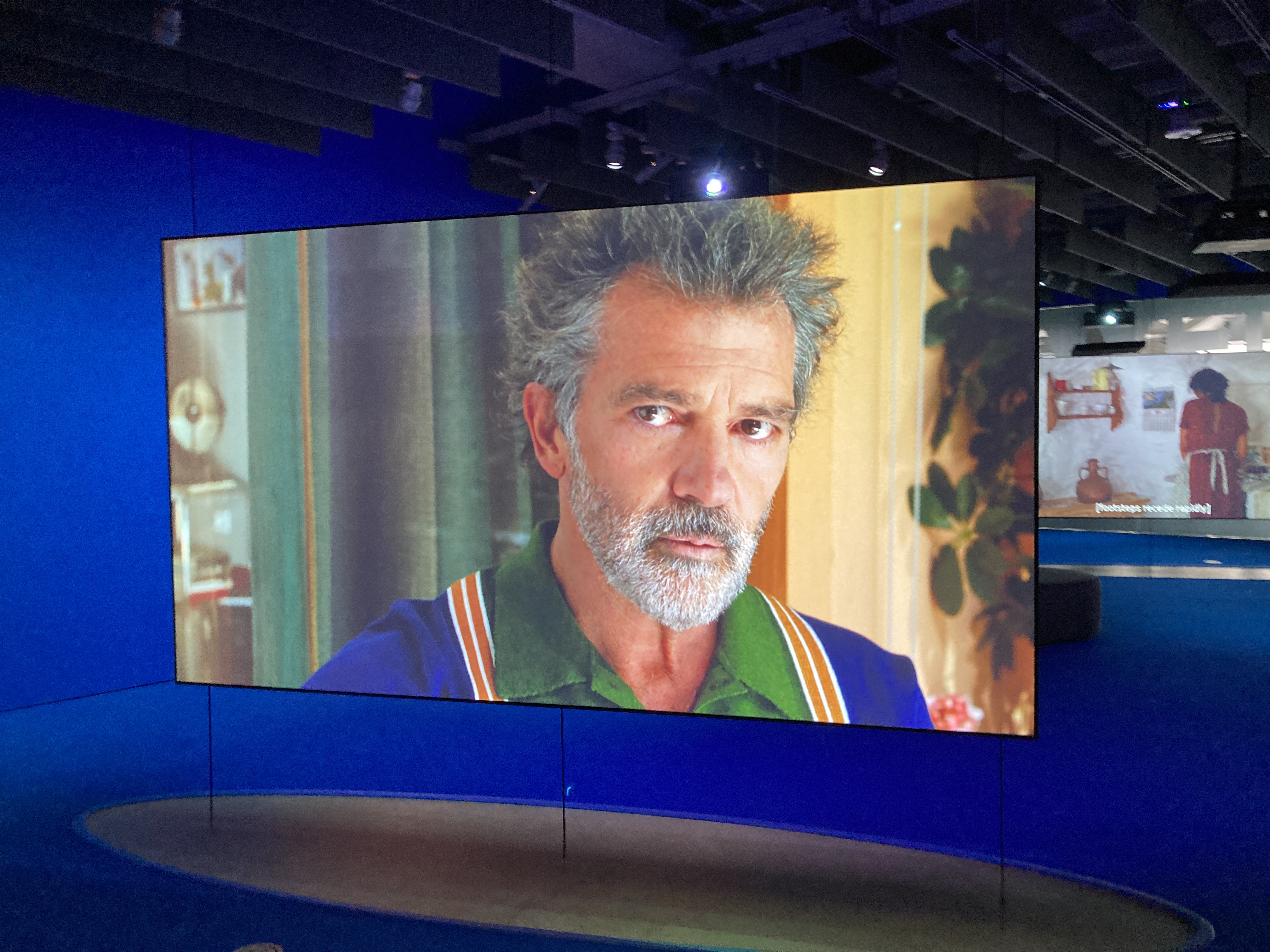 Pedro Almodovar designed the royal blue-lit exhibition devoted to his films, with key scenes and themes unspooling on 12 huge screens. It spans the early careers of regulars such as Antonio Banderas (“Labyrinth of Passion”) and Penelope Cruz (“Live Flesh”) to their co-starring roles in Almodovar’s Oscar-nominated “Pain and Glory.” 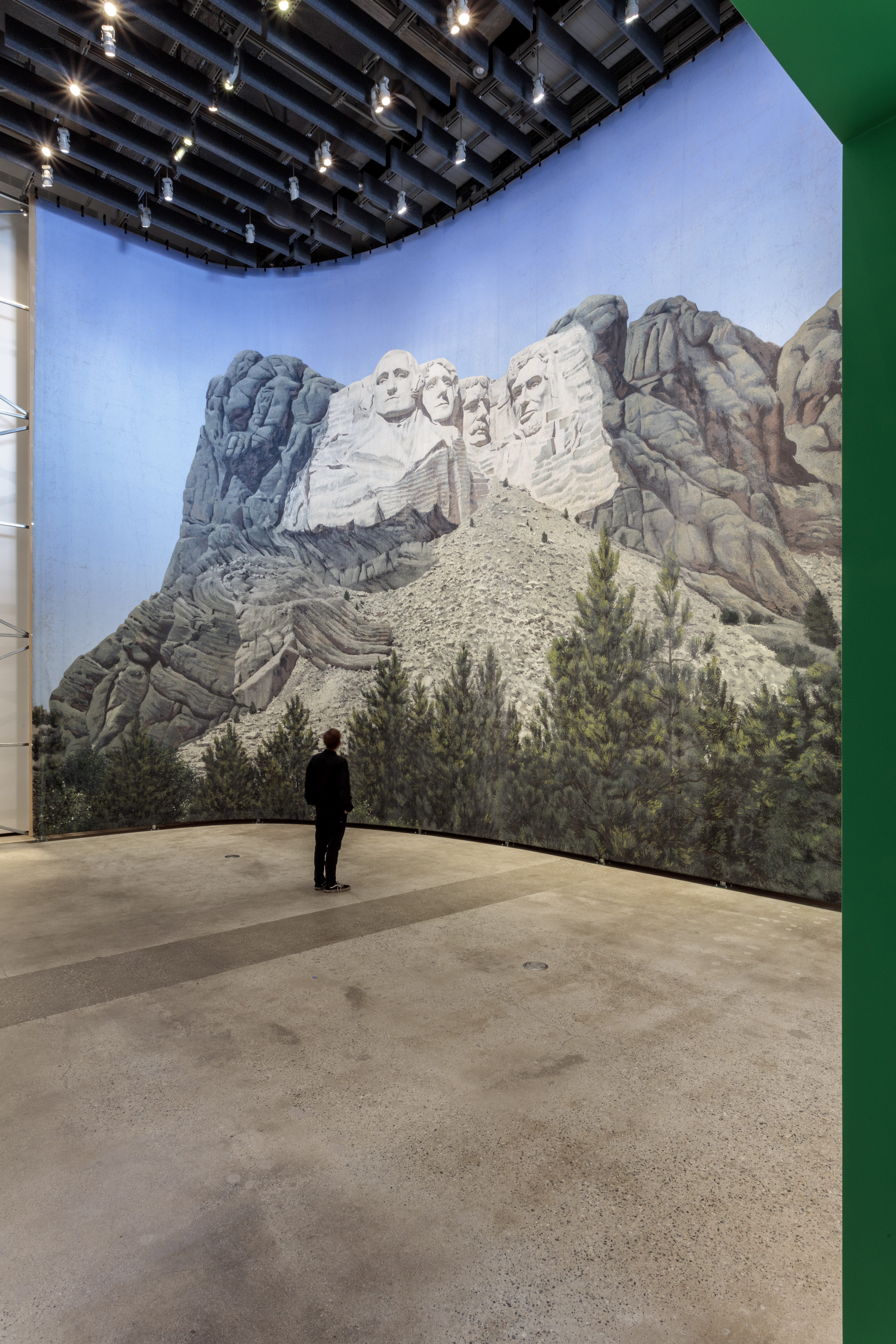 The matte painting of Mount Rushmore used in “North By Northwest”

My favorite display was a dip into how-Hitchcock-did-it called “Backdrop: An Invisible Art,” a double-height installation that presents the matte painting of Mount Rushmore used in Alfred Hitchcock’s 1959 thriller “North by Northwest,” along with photos showing how the backdrop was seamlessly used and a video interview with production designer Robert F. Boyle, who put himself in real danger clambering over the South Dakota site to figure out what was possible to replicate on a set.

If media interest was any indication, visitors will patiently line up for immersive The Oscars Experience, which gives each person a round of enthusiastic applause as they accept a (heavy) gold Oscar statue. Academy history on hand highlights memorable moments and winners’ speeches and 20 Oscar trophies beginning with Best Cinematography for “Sunrise: A Song of Two Humans” (1927) and ending with Barry Jenkins’s Best Screenplay win for “Moonlight” (2016), complete with a handwritten congratulatory note from memorably confused presenter Warren Beatty.

If only Piano didn’t like the popular nickname of his creation. “Don’t call this, please, the Death Star,” he said of the 300,000 square-foot, seven-story museum complex at Fairfax and Wilshire, with its glass-topped concrete sphere and roof terrace with stunning views of the Hollywood Hills. He suggested some alternatives: Dirigible? Flying vessel? Soap bubble?

“But this soap bubble will never blow up,” he said. “Don’t worry. It’s very well done. Thank you.”