Home » TV » Another Summer Without Comic-Con: Why the Event’s Future Is in Doubt

Another Summer Without Comic-Con: Why the Event’s Future Is in Doubt Theme parks are reopening, concerts are being staged, and theaters are screening tentpoles again. But one summer entertainment standard — San Diego Comic-Con — will be conspicuously absent from the upcoming season of pandemic recovery. Instead, organizers are staging [email protected] for the second year in a row, taking place July 23 – 25. Last year’s version saw lackluster reception, with none of the big announcements or panels that typically put Comic-Con on the international stage.

There will, however, be an in-person event in November on Thanksgiving weekend, but even organizers are managing expectations for the gathering, which has been purposely packaged as a “special edition.” “The show is not Comic-Con, our massive convention held in July. Comic-Con Special Edition is expected to be a show of fewer days with a smaller gathering of attendees and fans,” Comic-Con spokesman David Glanzer told IndieWire.

The likely result is that it will be a whopping three years between the last full-fledged San Diego Comic-Con in 2019 and the next edition, presumed to be in 2022. That, coupled with other recent developments, have called into question whether Comic-Con can hold on to the status of the massive Hall H — the main setting for the con’s biggest panels, and a space which the Los Angeles Times once called “the most important room in Hollywood.”

The 2019 con attracted over 130,000 attendees and 2,500 members of the media from over 30 countries, according to the Convention Center. While the vast majority of the hundreds of exhibitors who set up booths at the con each year are independent creators and companies, Marvel, DC, and other studio-owned franchises have been instrumental in growing Comic-Con to its current size.

Disney’s own fan convention, the D23 Expo, first started in 2009, has grown into a weekend-long spectacle featuring some of the biggest names in geek culture: Marvel and “Star Wars.” And Warner Bros. dipped its toe in that pool last summer with its DC FanDome; the studio is planning a follow-up for October, about a month before Comic-Con Special Edition.

The Special Edition’s dates of November 26-28 attracted controversy when they were announced last month; many fans sounded off about how they’d rather spend Thanksgiving weekend with their families after a long, lonely pandemic. Glanzer said organizers had to contend with an “extremely full” Convention Center calendar and that those dates were the “only workable option” for an in-person event this year.

And those dates are unlikely to sit well with major studios, according to Brad Gastwirth, investment firm Wedbush Securities’ chief technology strategist. He noted that Comic-Cons are large expenses for companies that might have begun to prioritize resources for other events and argued that the San Diego convention would have to give them a better return on investment if it wanted to remain a must-attend event.

Back in 2009, Comic-Con was absolutely a “need to do” in Disney’s mind. Back then, before the company owned both Marvel and “Star Wars,” Disney lured potential members of its fledgling D23 fan club using a Comic-Con booth.

A few months later, the first D23 Expo was held 100 miles north of San Diego in Anaheim. The most recent biennial expo, held in 2019, was a crowded, shiny, and spectacle-filled reminder of Disney’s rise to industry dominance over the previous decade. The company offered pre-launch previews of its IP-heavy Disney+ lineup, plus new footage of “Star Wars: The Rise of Skywalker.”

Warner Bros. pounced on the opportunity to do something similar last summer as events started going virtual. Though a WarnerMedia representative did not return a request for comment for this story, Warner Bros. executives told IndieWire last summer that the first installment of their two-part DC FanDome was a runaway success. A follow-up is planned for October 16.

Last year’s event was held over two weekends. The first was an eight-hour programming block, which featured new trailers for “Wonder Woman 1984,” “The Batman,” and “Zack Snyder’s Justice League,” drew 22 million global views across 220 countries and nine languages over 24 hours, and media buzz close that resembled Comic-Con’s usual impact. The international nature of the DC event was turned up with 14 hosts from 13 countries. 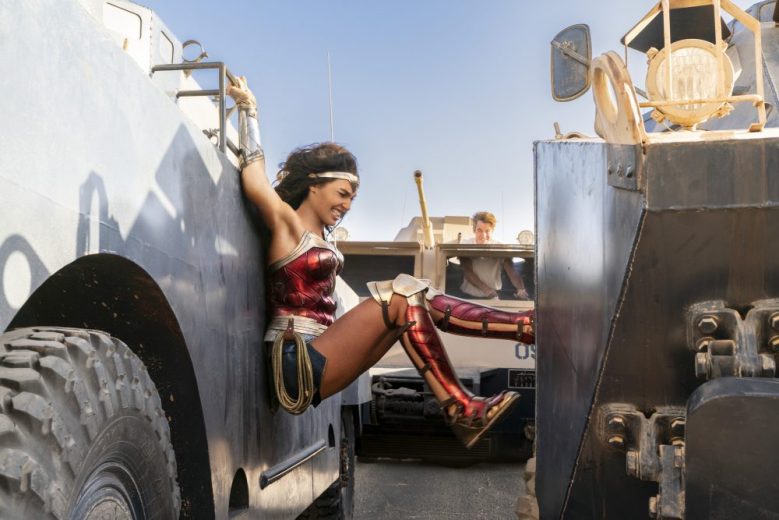 It was held shortly after the in-person Comic-Con was swapped for [email protected], an event made up of pre-recorded YouTube videos that offered little of the excitement and interaction of Hall H panels from Comic-Cons of years past.

“The barriers were brought down, that’s what virtual allowed for. They didn’t have to fly and wait up all night on line to get a ticket and get in and ask one question,” Blair Rich, Warner Bros. then-worldwide marketing president, told IndieWire at the time.

Rich added a caveat: Warner loves major conventions and wants to continue partnerships with them. Still, the allure of a cheaper, worldwide event that earns press and social media buzz, particularly one that the studio fully controls, is not lost on executives. “We spent less to execute this than we would have spent at the physical event, less to make and market, too, than if we had a physical presence,” Rich said.

Comic-Con, too, values its relationship with Warner Bros.

“We continue to have a great relationship with DC/WB and Disney, and other networks and studios for that matter,” Glanzer said. “While the field has certainly seen more pop culture conventions, we continue to focus on our events in our effort to make them the best they can be. As we’ve long said, we are fans ourselves. Many of us started with Comic-Con as volunteers and have been with the organization for a great number of years. Our desire has always been to produce the type of conventions and events that we would want to attend ourselves.”

Comic-Con is organized by the nonprofit San Diego Comic Convention. While two years without a large, in-person event is likely to hurt, the institution has solid financials. In the 2019 tax year, the most recent year for which tax documents are publicly available, Comic-Con collected $28.5 million in revenue and spent about the same amount. It ended the year with about $8.35 million in cash and $7.56 million in savings/temporary cash investments.

Although recent Comic-Cons have not boasted as many trailer premieres for tentpoles or other exclusives in recent years, the San Diego event continues to boast strong attendance numbers and can serve as an invaluable advertising opportunity for studios of all sizes, according to Henry Jenkins, a media scholar and provost professor at the USC Anneberg School for Communication and Journalism.

Jenkins, who has served as a panelist at a handful of San Diego Comic-Cons, noted that Comic-Con has long been a useful platform for smaller artists and film and television studios to promote their products and argued that that wouldn’t change if major companies begin to pull out of the event.

“Comic-Con will still have a massive crowd even if the big studios start to decline invitations,” Jenkins said. “San Diego Comic-Con has always been beneficial for smaller producers and artists who need visibility, especially if large companies like Disney pull out. The crowd isn’t going to necessarily decline so the small to mid-sized artists will become bigger fish in a small pond, and that’s the case I would make if I was talking to ‘second-tier’ franchises about why they should be at Comic-Con. This is how cult hits emerge.” 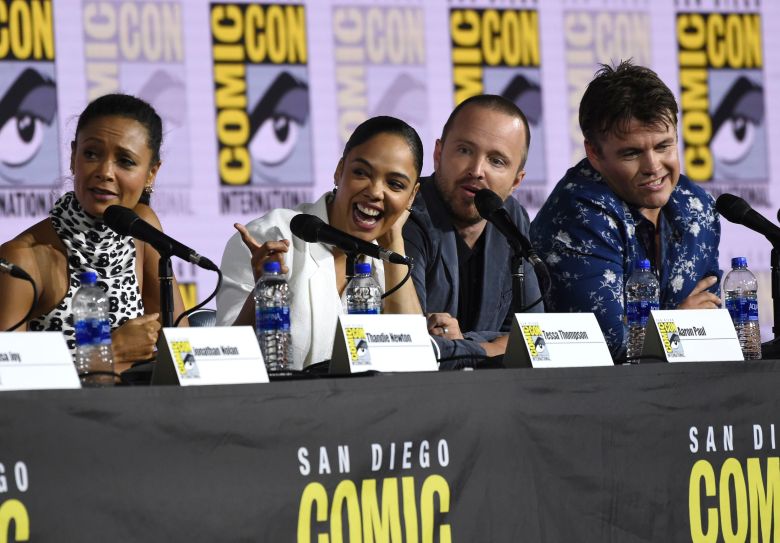 Smaller, here, doesn’t mean microscopic. While Hall H has come to be known for must-see panels put on by Marvel and “Star Wars,” 2019 headliners in the hall have included AMC’s “The Walking Dead,” HBO’s “His Dark Materials” and “Westworld,” and longtime Comic-Con fixture Kevin Smith.

As it stands, Disney’s mega-franchises and Warners’ DC brand are the only two players who can currently go at it alone. All of the other studios and streamers have plenty of franchises that would remain big draws at the con, even without their own independent events. That could include 2022 releases like Universal’s “Jurassic World: Dominion,” Lionsgate’s “John Wick: Chapter 4,” and Paramount’s “Scream 5.” Amazon’s “Invincible” has been renewed for two more seasons and “The Boys” already has a strong presence at Comic-Con. Meanwhile, Netflix is continuing to invest in superhero material such as “The Umbrella Academy” and “Jupiter’s Legacy.”

Andrew Seth Cohen, director of publicity at Impact24 PR, frequently produces panels at Comic-Con that feature his below-the-line clients working on major shows and movies. He said no other PR opportunity offers a better bang for your buck. “I’m such a big fan of Comic-Con. It’s simultaneously the most intense logistical challenge, but also the biggest return on investment,” he said.

Comic-Con also continues to boast value for artists not affiliated with a major studio and for many independent exhibitors. Among them is Eric Nakamura, who has been exhibiting at the event for nearly three decades, first as the co-founder of the Asian and Asian American pop culture magazine Giant Robot and now as the owner of a retail store of the same name.

“There was a time when people were there to seek us,” Nakamura said. “Now we have a little bit of that, but it’s tiny — it’s like five percent or less. People are just random passersby.”

Rebecca Hicks, creator of the webcomic “Little Vampires,” has been attending Comic-Con for almost three decades as a fan and since 2007 as an exhibitor. She noted that she has seen the passersby effect on her business, where attendees head to booths like hers as “refuge” from the spectacle of the behemoth exhibitors. Conventions are the main driver that allows her to make a living off her work; she attends up to 14 a year. Comic-Con, despite its changes, remains the most crucial event for her.

“The last [in-person] year I made a profit — and it’s not a cheap show to do,” Hicks said, regarding her experience at Comic-Con in 2019. “I try to make my booth as attractive as possible. But I have to keep pushing it — Robert Downey Jr. was in the Marvel booth not too far from mine,” she said.

Major entertainment companies are taking a wait-and-see approach to Comic-Con 2021, and none of them are openly discussing their plans: Representatives from Disney and Amazon, the latter of which premiered an exclusive clip for popular superhero show “The Boys” and announced its Season 3 renewal during [email protected], did not return requests for comment.