BBC Sunday night staple Antiques Roadshow has welcomed thousands of guests to various picturesque locations across the nation over the years. However, due to the experts viewing so many items on every occasion, there are often segments which don’t get included in the hour-long show. Tonight, host Fiona was on-hand to give a more detailed look at some of the most treasured belongings shown to experts which hadn’t been included in the series before. And one item showed off to expert John Sandon was an eye-catching Italian religious plaque, which possessed a substantial value – leaving the guest refusing to believe the verdict.

Viewers were given snippets from Roadshows gone by with Fiona revisiting some of the most-loved locations.

One place of interest this evening was Salisbury Catherdral, where Fiona tried her hand at some stonemasonry.

Of course, there were many guests hoping to find out their beloved pieces were worth a large sum of money.

And one viewer did just that after expert John revealed just how much his stunning artwork was worth, leaving him gobsmacked. 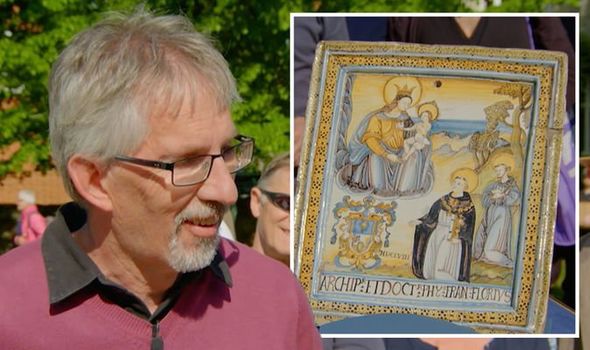 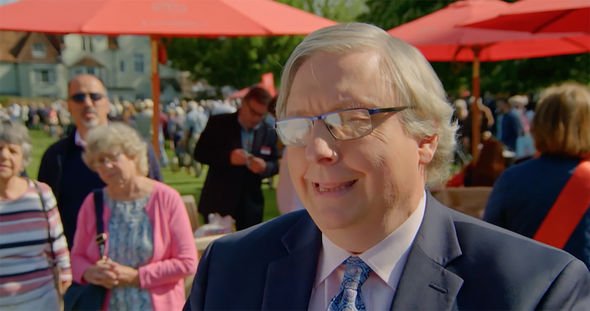 The decorative piece showed a Madonna and child alongside two saints, with the expert soon quizzing the guest on how he had come to own the plaque.

Here int he shadow of the great cathedral, the most appropriate piece, because you’ve brought along a devotional panel from a grand church.

“It’s quite a special one, what do you know of the history?”

The guest confessed: “Very little really, all I know is my grandfather bought it pre-war, 1930, 1935… something like that, from an antique shop in Lingfield, which he passed many times. 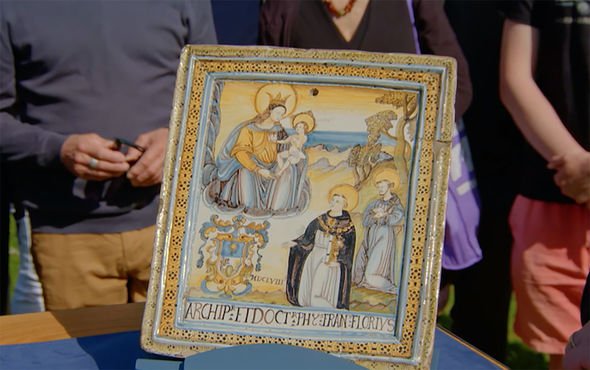 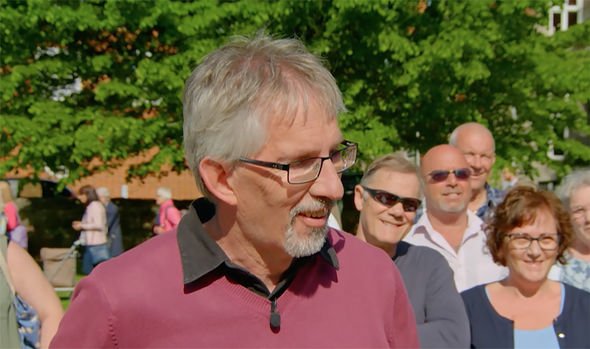 “He saw this, he declined from buying it because it was so expensive and the last time, he thought ‘If I don’t buy it, it’s going to go.’

“So he went and bought it, took it home to his wife who was not at all happy – she would rather have had some extra kitchen units!”

The guest continued: “And there was a lot of debate over whether it should go back to the antique shop but we kept it and here it is today.”

The expert reiterated how “special” the piece was and delved into further detail about its origins.

He explained: “It’s an Italian plaque and it was created to hang on a church.

“What you’ve got is the Madonna and child here with two saints and the details on the bottom are of the donor who commissioned it.”

He said it had been commissioned in a town called Castelli, in eastern Italy.

John continued: “We know when it was commissioned because we can see the date… 1658,” leading the guest to remark: “Goodness!”

The expert went on to praise the piece, especially taking into account how dated it was, adding:  “Considering we’re looking in the middle of the 17th-century, this really is in remarkable condition!

John pointed out a couple of small flaws, with the guest wondering whether the hole in the top of the piece was “original.”

The show’s expert said: “These paintings would have been mounted to a wall… but here, someone’s wanted to hang it and they’ve rather crudely just taken a drill and drilled right through!

“It really does look good… he’s got something really quite special,” Mark said, going on to give his verdict on its value.

“I suppose we’re looking at £8,000?” he remarked, with the guest struggling to believe what he had just heard.

Shaking his head in disbelief, he said: “Wow, no?! That’s amazing, I never expected that, that is amazing. Thank you very much, John.”

Antiques Roadshow airs Sundays at 8pm on BBC One.